Ford rolled its first F-Series pickups - with their Million Dollar Cabs - off the assembly line and into showrooms early in 1948. Company executives undoubtedly had high hopes for the model's success, but little idea they had launched a light-truck dynasty.

More than six decades and 12 generational changes later, F-Series production tallies almost 34 million, doubling the number of Model T's built and jockeying with the Toyota Corolla for honours as the best selling vehicle in history.

The F-Series has also been the best-selling full-size pickup in the U.S. for 33 consecutive years and the top-selling vehicle of any kind in most of them. In Canada, where Canucks are often lauded for purchasing smaller, more fuel efficient vehicles than their Yankee cousins, Ford's big F-Series pickup's popularity here stretches back an astonishing 44 consecutive best seller seasons. More than 714,000 were sold here over the past decade, making it the top-selling model of any kind.

Ford F-Series trucks through the years In Pictures: Ford has been building trucks for more than 60 years.

Small wonder F-Series sales reputedly account for about half of Ford's annual profits. Its story begins in the years following the Second World War, when Ford, along with other auto makers, was scrambling to create new models. Ford made a major investment designing the modern F-Series in 1948, spending $1-million just on the cab.

The F-Series was smartly styled with rounded fenders, into which the headlights were inserted, flanking a five-bar grille. The windscreen was a single sheet of flat glass, and the cab was mounted to the frame on rubber pads, bringing roominess and comfort to what had been viewed as a strictly utilitarian type of vehicle type.

Comforts and conveniences included a sun visor, ashtray, and larger, easy-to-read instruments, and a fully adjustable coil-spring bench seat. Also offered was the "Spiralounge Seat," a single driver's seat with a hydraulic shock absorber and spring.

The ventilation system provided three-way control and optional was Ford's "Magic Air" fresh-air heater and defroster. You could also order a "See-Clear" windshield washer system operated by a foot pump and dress things up with optional chrome.

Mercury-badged versions of the F-Series were sold in Canada from 1948 to 1968.

The second generation appeared in 1953 with significantly revised styling, including a wide and handsome new grille that incorporated the headlamps. They were now known as the F-100, the F-250 and the F-350 designating half, three-quarter and one ton versions. Mechanical improvements over the next couple of years included more powerful engines, power steering, and features such as armrests and cigarette lighters.

The third generation arrived in 1957 with new styling, featuring a flat hood that sat flush with the fenders, a chrome grille and curved windscreen. A Flareside, with separate fenders flanking the box shared showroom space with the slab-sided Styleside. New six- and eight-cylinder engines provided more power for the F-Series, which was now being built in 10 assembly plants.

Canadian production began in 1961 with the fourth generation, which was a full redesign with wider and better-integrated front end styling, engines with more than 200 hp, and in 1965 Ford's new Twin I-Beam front suspension. Ads claimed this allowed it to "drive like a car - work like a truck."

The next generational change in 1967 was more about style - a simple and clean new look - than any real changes in the truck's major features, although 360-, 390- and 302-cubic inch engines became available. The cabin was also redone with improvements to function and comfort, as two third of pickup owners were using them for recreational purposes.

By the time gen-six rolled out of the factories for 1973, the mechanical basics, with the exception of powertrains, were pretty much fixed. Styling changes began to reflect increased personal usage, with the Supercab appearing in 1974 and the now-classic F-150 in 1977, the first year the F-Series began its domination of pickup sales. In 1978 a record 864,000 were sold.

In 1980, a significant redesign was undertaken for the seventh generation, introducing new squared-off styling, improved fuel efficiency - and a diesel engine option for the first time - and improved rust protection. The F-100 designation ended with 1983 models, with the F-150 taking over the base truck role.

The eighth remake of the F-Series debuted for 1987 with the edges rounded off for a smoother look, with Flaresides no longer offered. New features included rear anti-lock brakes, five-speed manual gearboxes, fuel injection (carbs had disappeared by 1988) and independent suspension on 4x4 models.

By the time the ninth generation hit the streets for 1992, styling had become more aero-oriented and the Flareside was back. A year later the hot-rod F-Series Lightning - with 351 cubic inch, 240hp engine and handling tuned by racer Jackie Stewart - charged into showrooms to change people's pickup perceptions. New features included driver's side airbags, keyless entry and CD players, and an Eddie Bauer option upped the luxury quotient even further. In 1995 F-Series production passed that of the VW Beetle.

The most comprehensive redesign in two decades was introduced with 1997's tenth generation. Stunning aero-styling and more fuel-efficient engines aimed at the new millennium raised eyebrows. An even wider range of body styles had evolved to suit every conceivable need, along with a new Lightning and Harley-Davidson and King Ranch editions.

The F-Series was redesigned again for 2004, its appeal broadened even further by new features reflecting more daily-driver usage, that included much improved safety ratings. Sales reached 939,511 that year. And a 60th anniversary special edition was created to celebrate that milestone in 2008.

The current and twelfth generation F-Series was launched for 2009 and continued trends towards more passenger comfort with a larger cab and improved efficiency and safety, while still being able to work hard when required.

Latest models include the 2010 SVT Raptor aimed at off-road enthusiasts and the latest Harley-Davidson edition, with seats covered in bike jacket leather.

Ford F-Series trucks through the years In Pictures: Ford has been building trucks for more than 60 years. 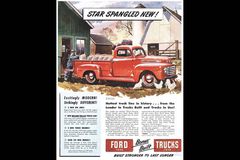