Skip to main content
Joanne Will
Frankenmuth, mich.
Special to The Globe and Mail
Published August 1, 2015

Frankenmuth is a small German-themed town that is home to the world’s largest Christmas store, two of America’s largest family restaurants and a host of other shops – including a Tim Horton’s – in Bavarian-style buildings.

This year, it was also home to the 40th NAMGAR GT, the annual get-together of the North American MGA Register, hosted in June by the Michigan Rowdies club.

The symmetry is perfect: a lovely town and beautiful cars. 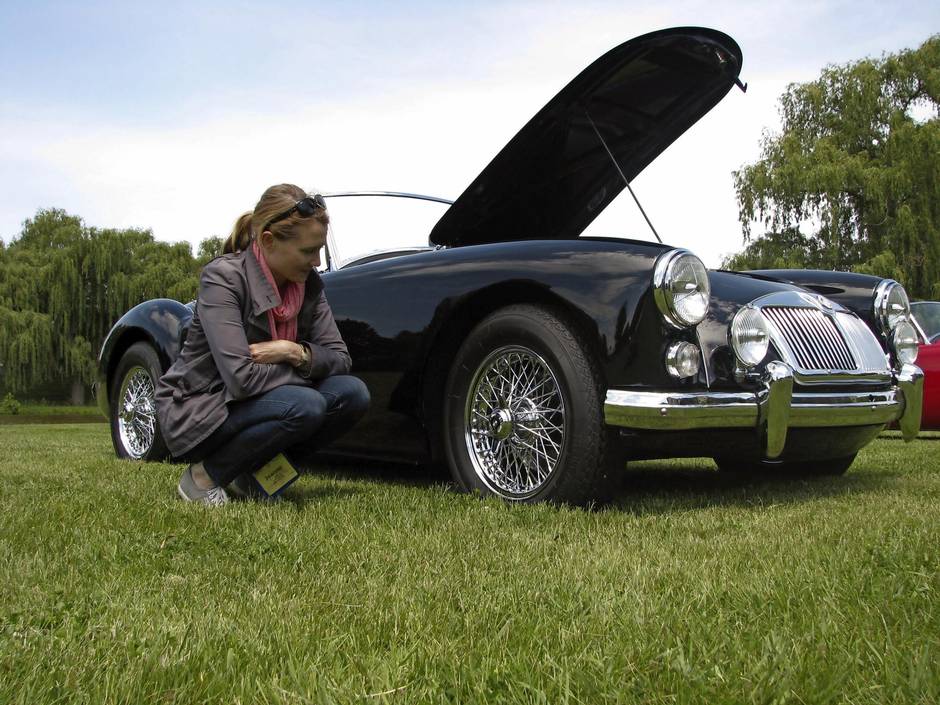 A few hundred MG owners and enthusiasts gather for five days to revel in a subculture that goes far beyond the casual camaraderie at a local car gathering. The attendees, from across the continent and overseas, all know each other and are as close-knit as family at a reunion.

Related: For the love of a classic British sports car that's now banned in Canada

MGAs of every style sprawl on the lawn next to the Cass River: the 1500 and 1600 series, Mark II, Twin Cam and De-Luxe variants. A few rogue entries sneak in under the “Other British” category, including a “new” 1996 MG with Alberta plates.

The MGA – built from 1955 to 1962 by the Morris Garage division of the British Motor Corp. in Abingdon, England – is a sleek sports car with sensuous lines, that some compare to a woman lying on her side, the rear fender representing her hip. 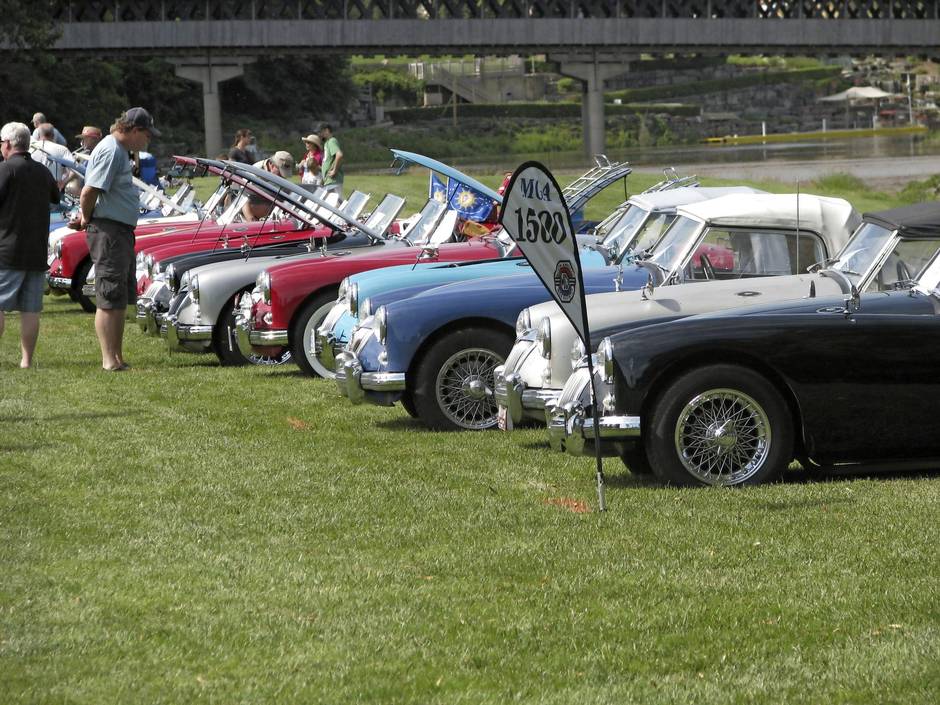 To the untrained eye, each classic is as beautiful as the next; lined up together they’re a sight to behold. Trying to delineate one from the next, I scrutinize and settle on the front-bumper where, depending on the alignment, the attaching bolts may or may not be exposed.

A morning spent (voluntarily) polishing the wire wheels on my boyfriend’s car gives me new perspective on cleanliness. Anything less than mirror-quality shine does not pass muster.

But while cleanliness matters to some participants, for others road grime is a badge of honour after a journey from Florida or California or Vancouver.

As Doug McClure – here from Ottawa with his wife in their red 1961 MGA 1600 – says, all of the cars are not perfect in their own way. “Much the same as people, we’re all different; we each have beauty in one place or another, and we all have our flaws, but it all works.” 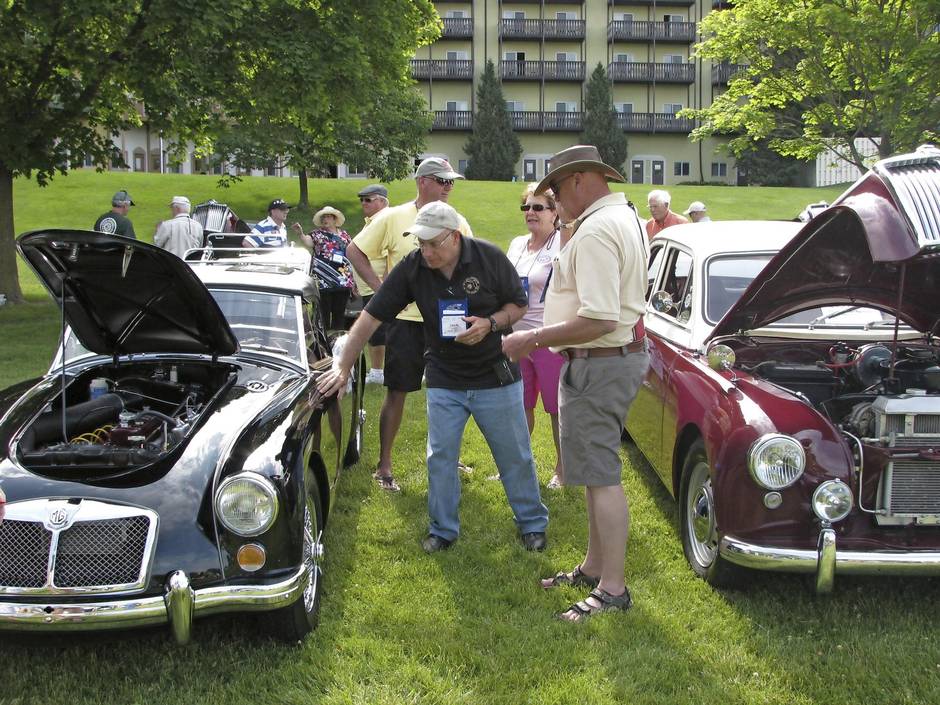 Attendees vote to determine the favourite models in each category, but this is a non-competitive gathering – free of the snobbery and judgment that can accompany other classic marques. A Beverly Hillbillies-style car with no hood or roof, rust finish, wooden bumper, a cage of fake chickens resting on the back and “Chickens R’ Us” scrawled across the door panel is just as welcome as a concours-worthy black 1952 MG TF.

Ditto for another stand-out model, a 1962 MGA complete with flashing blue lights, a bell, radio phone, antennas and speakers, which began life as a police vehicle in Lancashire, England.

Collectors and enthusiasts in Frankenmuth, most of whom are past mid-life, attend tech sessions, swap parts, race around in rallies – and, especially for those in convertible versions, continuously scan the sky.

The North American Register, boasting 57 chapters, was established in 1975. Fellowship among owners is clearly the most important aspect of membership. 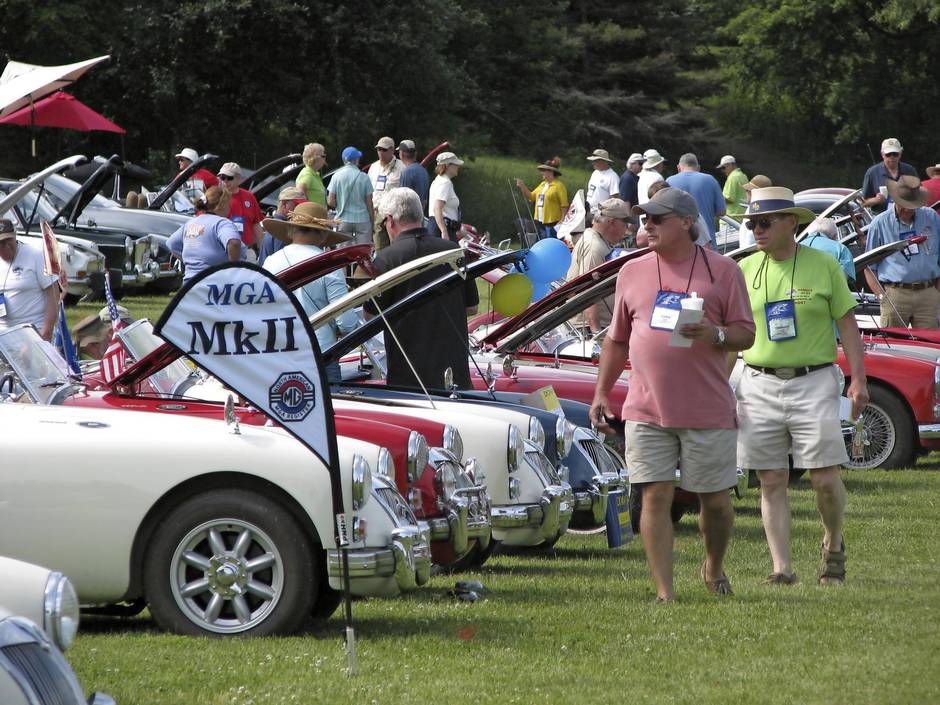 “The cars themselves are interesting, and we share technical knowledge,” McClure says. “With the age of these cars you need to have a group of people together to fall back on for advice and assistance. In the Ottawa club, if someone says, ‘I’m pulling the transmission next week and don’t really know what I’m doing,’ a group of 15 people will show up and get the job done in short order.

“But it’s more the people and friendship associated with the cars … The bond is important.”

This event is a first-time experience for me and my boyfriend, and – surprise – he wins a prize for his 1960 black MGA 1600.

I can’t be certain, but the shiny wire wheels seem to have tipped the judging. 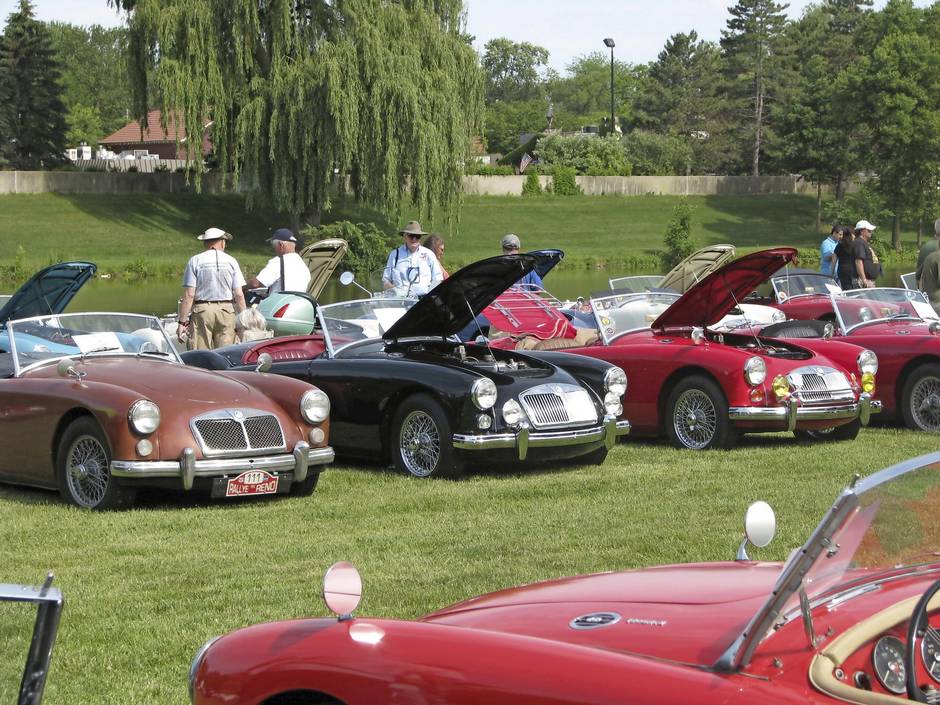