The issues I knew about: The transmission was about to grenade, the radiator was leaking, it needed brakes and it burned as much oil as gas. I needed a reliable ride for my new job as a travelling trainer in the auto parts business, so rather than spend the money to fix the 'Stang, I bought a new car.

But I kept the Mustang. Maybe it was replacing a manly muscle car with a piddling economy car - I could always tell my gearhead trainees, "But my other car is a Mustang 5.0." Maybe it was the sentimental value. I had my first kiss in that car. My first fender bender. And it was my late father's pride and joy.

So I negotiated an extra parking spot with my landlord, and began my odyssey with the Mustang that doesn't run.

It hasn't been easy keeping the old car. It occupies the only viable parking spot in our garage. Every winter morning for years, I've braved the cold to brush snow and ice off our daily driver, just because I can't let go of the old heap.

It takes all sorts of gymnastics and creativity to get our bikes in and out of the garage without scratching the Mustang. Only patient shuffling and rearranging allows our road hockey net and three city-mandated garbage cans to co-exist, carefully squeezed between the Mustang and the garage door.

I often wondered why these daily inconveniences didn't wear down my attachment to the old ride.

It was certainly a fun car when it did run. There's something intoxicating about a V8-powered vehicle, with the off-kilter rumble of a pushrod motor only a few feet in front of you. Intoxicating enough that Ford and Chrysler kept on making them in spite of $1.30 a litre gas. Appealing enough that even GM's bankruptcy wasn't enough to stop the new V8 Camaro.

Yet the fun of driving a V8 (and paying for the gas) doesn't really explain why I've spent 10 years being "just a couple of months away" from commencing a full restoration. I do understand why it's been delayed again and again. A wedding. A house and mortgage. A job in middle management. A baby, then another baby. There are always more important things to spend money and time on.

But why after all these delays can't I just give up and let it go? There's no rational or logical reason to restore this car. It's not rare. Ford sold a ton of Mustangs in the late eighties, and I still see a lot of them on the road today.

While it was a decent car when it came out, there are now any number of better driving cars I could buy for less than what the restoration will cost me. The Mustang has no safety features, not even a single airbag. And after 10 years of not moving, I'm sure the list of components that need to be replaced has doubled in length since the day I first parked it. But in my mind, I've always been mere months away from starting.

A new motivating force recently surfaced. My five-year-old son began demanding that we fix "McQueen." The Mustang is red, and has a similar silhouette to the main character in the little guy's favourite movie, Cars . The pressure is on now: If I don't get this car on the road again, my son will forever view me as the author of his favourite character's demise.

The cartoon connection motivates my son to get on with it, but his new-found interest has summoned something much deeper in my consciousness. My clearest childhood memories are of my dad teaching me about our cars: how to use a timing light, how to replace spark plugs, how to change the oil - the list could go on and on.

I was so young when he started teaching me, I had to use stools and ladders and chairs to see what was happening under the hood. Dad hated sports, so it's not surprising that most of the quality time we spent together was focused on maintaining and travelling in our family car.

Times have changed. My current car is so complex, I'm almost afraid to lay a wrench on it. I think the vehicle's manufacturer feels the same way, as the motor is hidden under a huge plastic cover with no readily apparent way of removing it.

Still, I can't shake the image of father and son spending long summer evenings in the driveway, tinkering under the dim glow of a trouble light.

And my desire to relive that image as a father has made me realize that keeping the old Mustang was never really about restoring it at all. It was always about some day connecting my son to the grandfather he never knew, and passing on those experiences that I'm so grateful for today.

We won't even try to bring it back to showroom condition. But when my son and I start working together to get it running, I'll know that keeping the car was more than worthwhile.

Facts & Arguments
A pastor without a congregation
August 25, 2009 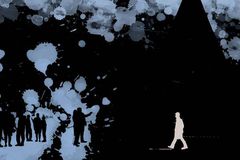