Gentlemen: I know you are at the Paris auto show. I hope this reaches you in time. Manufacturers, including Ford, seem to release their good stuff in Europe before it ever gets here. So here is my question: I want to trade in my old Ford Escape. I hear there is something with a weird name, something like the Escape, that is going to be built in the U.S. Or not. It's all over the business pages. What is it and is it worth waiting for? Hope this reaches you in time. - Robert

Cato: Bobby, your e-mail arrived in the nick of time. We in fact saw the Ford Kuga in Paris. Nice little crossover wagon and, yes, it's a European design - a car-based utility wagon. It sells pretty well in Europe, where only little SUV/CUVs stand a chance in the showroom. Ford's bosses think American and, naturally, Canadian buyers are evolving quickly like those in Europe.

Vaughan: So, of course, the Kuga is coming to Canada. It won't be built in Canada and it won't, at least for now, be built in the U.S., either. Ford plans to build Kugas only where it makes sense financially, then sell it everywhere from Argentina to Zambia with as few changes as possible. That's what the One Ford thing is all about.

Cato: Bobby, the Kuga is a worthy replacement for the Escape. Just the right thing. More on that in a second. But I also want to mention the Ford C-Max and the Grand C-Max, both sitting next to the Kuga at the Paris show. Small cars, small SUVs/CUVs, small minivans like the two Cs, all side by each.

Vaughan: Yeah, Rob, if you're longing for sliding rear doors, escape from your Escape and think about a Grand C-Max instead. Seven-passenger seating and remarkably roomy - a real minivan. It's too new to have much quality data yet, but I sure hope it's better than that awful Windstar.

Cato: It's not much of a stretch for Ford to build anything with better quality than the Windstar, and its successor, the awfully named Freestar. Look, the Windstar was a mess from the start. Ford launched it with only one sliding side door, not two, and then almost immediately along came new Chrysler minivans with a sliding door on each side.

Ford had to retrofit first a bigger front driver's door as a kind of catch-up move - because the engineers put a fuel line in a place where it interfered with the simple job of cutting a second sliding door. Then there was the more extensive re-engineering for a permanent side door. Oh, what a mess.

The Freestar, which was the Windstar's successor with a new name, came later and it was truly horrible, too.

Now fast-forward to today. Ford is cranking out some of the highest-quality products in the industry, cars and light trucks so good they almost make me forget about the Windstar/Freestar debacle.

Vaughan: Well, not quite, Cato. As your run through Ford's minivan history shows, you have not forgiven or forgotten Ford for the Windstar. But the C-Max is doing well in Europe and it seems like all the ones I've seen are diesels. If the diesel comes to Canada, I would certainly take a close look at that.

Cato: Bobby, what you did not ask about is the Ford Focus station wagon. We saw the new Focus wagon in Paris, too. Talked to CEO Alan Mulally about it, in fact. Ford Canada isn't going to launch the 2012 Focus early next year with the wagon version, just the sedan and hatch. But he made it clear that Ford would love to sell the Focus wagon, the new one, in the U.S. and Canada - and could not understand why American don't like small wagons like his company's new Focus.

Vaughan: Mulally is pushing the Focus wagon and I would not be surprised to see it go on sale in the next 18 months in Canada and the U.S.

Cato: Bobby, all three of these new Fords have many of the qualities you enjoy in your current Escape - lots of space, in particular. We were looking them over when Alan walked by. Ford's saviour and CEO was so, so upbeat. And with good reason. When he arrived in 2006, Ford was bleeding billions. Now Ford is making billions.

Vaughan: We were chatting when Jim Farley, Ford's global marketing boss, came by. Mulally gave him a huge hug, saying Farley was his greatest acquisition. Farley was a Toyota guy when Mulally lured him to Ford.

Cato: They seem like a happy bunch at Ford. Bobby, you'll be happier if you wait for the Kuga. It's a big leap forward from your Escape.

Updated: Photos from the 2010 Paris Auto Show The latest concepts and electric vehicles from the oldest auto show in the world, including the Toyota FT EVII 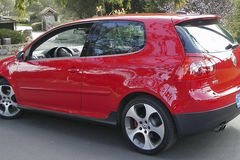 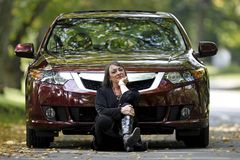 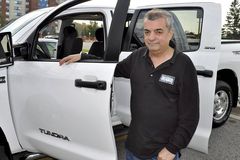