Overall Rating
8
Overall
An attractive cabriolet with style and substance that's bigger and more powerful than its predecessor. You'll love this car if: you're a sun worshipper who loves a luxury convertible.
Looks Rating
7.5
Looks
Attractive, but conservative design - could have been bolder to stand out from the crowd.
Interior Rating
8
Interior
Spacious and luxurious cabin; the rear seats are a little tight as is trunk space when the roof is down.
Ride Rating
8.5
Ride
Not a sporty ride, but a lovely grand touring machine that hugs the roads beautifully; the eight-speed automatic is smooth and precise.
Safety Rating
8
Safety
Well-equipped with safety features such as front knee airbags, dynamic stability control, traction control, anti-lock braking system, cornering brake control and ISOFIX child seat mounts in the rear.
Green Rating
4
Green
It's a twin-turbo V-8.

Mexico isn't on the top of my wish list as a travel destination. I've never had the desire to visit the country.

Even the U.S. customs agent grills me about my first trip: "Are you aware of all the violence? Will you have a bodyguard?" he asks, before warning "Don't leave the resort!" Unfortunately, I don't have a choice - I have to test drive the redesigned 2012 BMW 6-Series Cabriolet in Los Cabos.

In design, the 6-Series cab is a bit conservative and not as radical as its Chris Bangle-designed predecessor. Although some thought his design was controversial, I loved it, especially the high trunk line - it was distinctive and stood out on the road. The new 6 doesn't stand out as much: it's unassuming and low key, yet still attractive.

It has grown in every dimension; it's 74 mm longer, 39 mm wider and 9 mm lower than its predecessor. It has a long hood, a long wheelbase, muscular wheel arches and a classic soft-top roof, which comes in black or beige. There's no hard top available.

"One of the trademarks of every BMW is the 50-50 weight distribution. Looking at how much weight would have to be added to the vehicle equipping it with a hard top we decided to go with a soft top. … With a hard top unfortunately, you lose a lot of trunk space and a lot of versatility," says Alanna Bahri, the 6-Series product manager at BMW North America.

There's not a lot of trunk space with the soft top, either.

Officials boast you can squeeze two golf bags inside, but I'm skeptical. There's 300 litres of space with the top down; top up, it expands to 350 litres.

The electrically powered roof lowers and opens quickly and easily in a mechanical ballet of sorts with the touch of a button on the centre console. Opening the roof takes 19 seconds; closing it takes 24 seconds. You can even do it while driving at up to 40 km/h.

Nothing beats driving along the Baja peninsula topless in the scorching 30-degree-plus Mexican sun. I closed the roof once when traffic was heavy and the gasoline fumes mixed with the heat made me nauseous.

With the roof closed, the ride was quiet, refined and comfortable; it was easy to hold a conversation with other passengers. Top down, the cabin is pretty noisy and windy - the wind blocker helped somewhat - but my hair was like a rat's nest by the end of the drive.

The 6 Cab seats four with individually sculpted seats in the front and rear. The front seats are supportive and comfortable. The two rear seats look small, but we manage to squeeze a third passenger - who is 5-foot-7 -in the rear. Luckily, she was with two short people - 5-foot-5 and under - who didn't mind sacrificing their space for hers. Even with the roof closed, there was an impressive amount of rear headroom, too.

For now, the rear-wheel-drive 6 Series cabriolet only comes in one trim - a 650i. An all-wheel drive version will join the family this fall.

Powering the 650i is a 4.4-litre, twin-turbocharged V-8 with 400 horsepower and 450 lb-ft of torque. Hit the pedal and it's instantaneous power. It's quick and has enough guts to pass transport trucks, other cars, and even an old pickup with two cops bobbling around in the bed, without any problems.

The ride isn't sporty. It's a pleasant, luxury grand tourer with style and substance. If you want sporty, wait for the M version.

My tester had the new eight-speed automatic transmission, which is smooth and seamless in its shifting. You can also select gears manually via paddles on the sport leather steering wheel. A no-charge, six-speed manual transmission is also available. You can also choose between different drive settings: comfort, normal, sport and sport+. The steering is precise, but the turning radius isn't tight - three-point turns often result in five.

Our route wasn't filled with hairpin turns and twists; the roads were smooth and sweeping, a perfect backdrop for the 650i to strut its stuff. While our resort was a stunning picture-perfect masterpiece of beauty and luxury, the disparity along the route is obvious, heart-breaking at times. Driving a $106,800 convertible doesn't seem right in this region, but the locals don't mind. They smile, wave, and even chat with us, asking for trades with dilapidated old pickup trucks that would never pass an emissions test.

The 6 Series has been completely redesigned inside and outside. At the front, the kidney grille is a little higher and more prominent with LED fog lights and xenon adaptive headlights. The rear gets LED lights and oblong tailpipes that signify it's a V-8.

The BMW roundel is still the trunk opener, but hidden underneath is a rear-view camera. When the camera is activated, the badge pivots up and out of the way to expose the camera lens. Pop it into drive and the badge dips gracefully, protecting the camera from dirt. Inside, there's a huge redesigned 10.2-inch display that is crisp and clear - even in the direct sunlight.

The iDrive system operates the navigation system, telephone and entertainment functions - while improved, it's still frustrating and distracting to use, at times. Other technology is up for grabs. A package with high-beam assistant, lane departure warning, night vision and active blind spot detection costs $4,900; an executive package with rear-view camera, a head-up display, soft close doors, and a leather instrument panel costs $6,900. 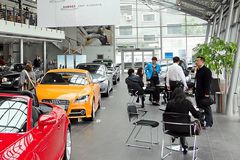 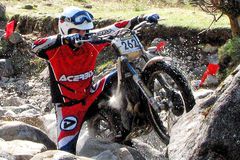 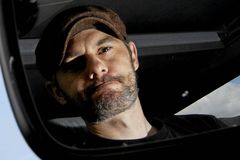 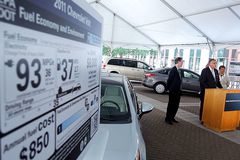 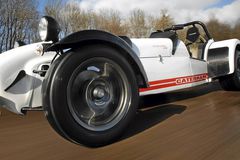