Overall Rating
9
Overall
The Maxima takes Nissan's traditionally sporty sedan a step up the sophistication scale.
Looks Rating
8.5
Looks
Shorter but a bit wider works well with this smoothly powerful body shape, which has plenty of room inside. The front end is uncluttered and distinctive.
Interior Rating
8.5
Interior
Nissan's interior design team blended a mix of old (wood/leather) and new (aluminum/soft-touch materials) to create a pleasant ambience that's also functional.
Ride Rating
8
Ride
The ride is surprisingly firm - particularly over frost-heaved spring-time back roads - although not harsh feeling. The benefits are crisp handling, though, which is in character for the car.
Safety Rating
9
Safety
Anti-skid, traction and brake assist systems, allied to a full roster of passive features and air bags, plus its ability to accelerate, stop and turn make the Maxima a safe bet.
Green Rating
8
Green
Well, it's mileage is fractionally better than the previous generations, despite having a whack more power, so it deserves some green recognition.

The pair of coffee-can exhausts poking out from fared arches in the 2010 Nissan Maxima's rear valance will give anyone driving up behind it a more than broad hint there's a potent brew percolating at the other end of the plumbing system.

If they were to roll a window down - and the Maxima driver obliges with a blip or two on the throttle pedal - they'd have this visual clue to the car's sporting character audibly endorsed.

And final confirmation would be secured if the Maxima pilot planted his or her right foot, causing the sound emitted by those twin pipes to rise to an unwavering wail and this four-door sedan to begin disappearing rapidly up the road. It accelerates to 100 km/h in little more than six seconds.

Another viewpoint: New Maxima looks for its own niche as it goes up against tough competition in mid-size sedans

Those inside, however, will be experiencing the initial generation of this noise - by the Maxima's 290-hp V-6 - as a rather unexpected, and bordering on the uncivilized, roar from the other side of the firewall. The use of "unwavering" in the paragraph above, incidentally, describes the interrelation between the engine and the continuously variable transmission. The revs rise to, and are maintained at, about 6,500 rpm, a number the on-board computer brain trust determines is optimum, and just stays there as the speedo needle rapidly winds around the dial. You can also shift through a half dozen pre-determined ratios with large, fast action paddle shifters.

Basically, you're aware of the motor any time the gas pedal is depressed, although, while the sound levels may be rather high, the sound itself isn't actually unpleasant. Nissan actually has a name for it, "Maxima Sound," so it's there on purpose.

The unprepared - for the level of sportiness built into this front-drive Japanese sedan - might find the ride a little disturbing, too. I won't say it's uncompromising, but the guys in the suspension tuning department who preferred handling over a cushy ride definitely got the better of the argument.

The steering is best described by the litany of terms involved drivers like to hear - direct, linear, responsive. The wide P245/45/18 tires bite nicely when you turn the wheel, and brake pedal feel is good, too. It sets up in corners with little body roll.

If the above gives the impression the Maxima is some kind of muscle car throwback, nothing could be further from the truth. I did find the engine noise level inside intrusive much of the time, but what I've tried to describe is the pure performance side of the car, the well-muscled athlete under the automotive equivalent of an Armani suit.

The Premium package adds no less than 19 features including a rear-view camera; moon roof; eucalyptus wood trim; heated and cooled driver's seat; seat, wheel and mirror memory; paddle shifters; power tilt/telescope wheel; mood lighting; rear bucket seats with armrest and pass-through. And, rather oddly, some metalwork fitted behind the rear seat that increases torsional rigidity in the body by 17 per cent. I'd think they'd toss this extra bit of tin in on the base model, too.

All this is crammed into a "super cockpit design" that actually lives up to that aspiration. The test car was attractively trimmed in dark wood with some silver bright work. New for 2010 is a 175-mm touch-screen colour monitor.

The premium front seats, with fancy stitching, are well shaped (two formed seats in the rear), climate and audio controls on the centre stack are easy to find and operate, the wheel feels good in your hands, the Bose system sounds great, the leather is supple and other surfaces have a feel-friendly texture. It's quiet enough to enjoy the stereo at cruising speed on a light throttle.

All in all, a pleasant mix of high tech and tradition with plenty of attention to detail.

The current and seventh-generation Maxima was redesigned for 2009, emerging from the process with bodywork trimmed in length by about 100 mm and the wheelbase by 50 mm, but with a wider track front and rear and increased width. Trunk space rose from 388 litres to 402 litres.

Nissan designers created "liquid motion" - inspired bodywork with flowing but muscular lines and a simple and uncluttered front-end treatment. And the view from the driver's seat is neat, a big central bulge flanked by smoothly curved fender tops.

Suspension is by MacPherson struts at the front with a multi-link controlled double-wishbone design at the rear, rolling on standard 18-inch alloy rims.

The engine is a revised VQ35 version of Nissan's long-lived V-6, with a displacement of 3.5 litres, output of 290 hp (up from 255 hp in the previous generation) and 261 lb-ft of torque - which is a lot by any measure, but particularly when you're pounding it through the front wheels. It copes remarkably well, though, with no front-wheel antics, just perhaps a hint of torque steer. The CVT is among the best of this transmission type, but not my favourite flavour.

This latest Maxima takes Nissan's traditionally sporty sedan a step up the sophistication scale, while retaining the traditional rorty/sporty nature that's been part of its appeal since the first one arrived in 1976. 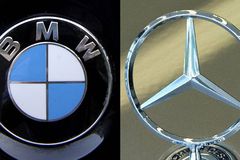