If actors Ewan McGregor and Charley Boorman had been able to take the incredibly light CCM GP450 Adventure motorcycle to make their legendary Long Way Round series of TV travel documentaries, they might have spent more time riding through the roughest parts east around the northern hemisphere and south to Cape Town, and less time pushing and picking up their massive BMW GS Adventures.

The trend toward smaller displacement machines, which has Japanese sportbikes now coming in the 125-320cc range and Harley-Davidson making a 500cc cruiser, has finally arrived in the adventure-bike segment with the GP450 Adventure.

It launched in Europe in early 2016, came to Canada late this summer and can go places and do things most other bikes bold enough to carry the “adventure” moniker can accomplish only in marketing imagery. 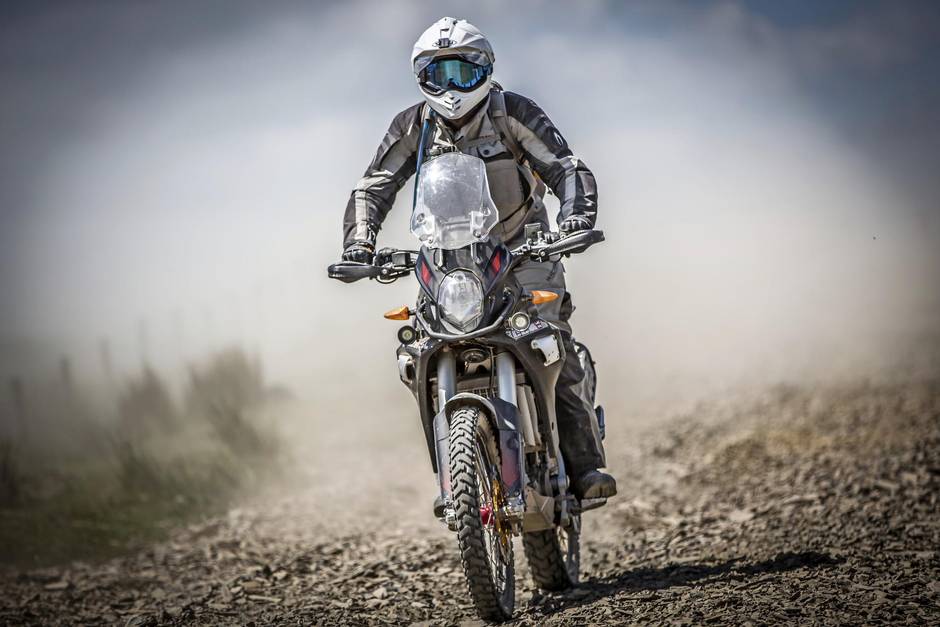 Adventure bikes are a compromise between off-road capability and touring comfort. In the GP450, that compromise happens across the horizontal centre of the bike. On top, it’s all touring bike, with a wide, comfortable seat, luggage capacity, large gas tank and small windscreen. Down below, it’s all dirt bike, with spoked wheels, the same suspension components favoured by the top European dirt-bike brands and an engine from BMW’s only dedicated off-roader, the short-lived G450X.

The long-travel suspension soaks up rocks, roots and whoops on the trail but keeps things stable on the road. The seat is wide and supportive for long hauls, but narrows at the front to provide a comfortable stand-up position off-road. The liquid-cooled single-cylinder 450cc engine is light enough to keep things nimble in tight and loose terrain, modern enough to deliver highway-capable power and detuned enough to allow for civil 8,000-kilometre intervals for oil changes and other service.

Its real trick, however, is the overall weight of the bike, kept remarkably low thanks to a unique frame that consists of 15 individually machined pieces of aluminum that snap together like a puzzle before being bolted and heat-adhered in a technique that’s considerably stronger than welding. At just 125 kilograms, it’s in the weight class of dedicated 450cc off-roaders and less than half the weight of the dominant adventure-class 700cc-1200cc bikes.

With a $13,499 base price, it’s good value given the quality: BMW-engineered motor, Brembo brakes front and back; WP forks and Tractive shock adjustable for rebound and compression; two suspension-height and two seat-height options giving a 10-centimetre range in saddle height; and a 20-litre fuel capacity.

You can buy a Japanese-brand single-cylinder dual sport such as the Suzuki DR-Z400S or Kawasaki KLR650 for about half the price and spend your way beyond $13,499 upgrading components to try to come close, but you’ll still end up with something less capable and 23- to 46-plus kilograms heavier. 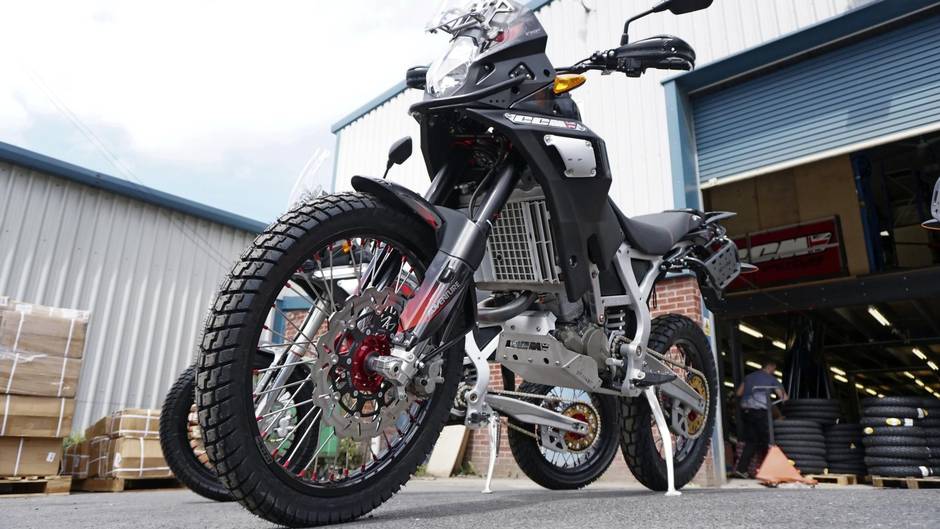 At highway speeds, it’s as tolerable as any single-cylinder dual sport, and surprisingly stable given its feather weight. The plush seat and small windscreen make it possible to sustain 100-plus km/h for hours, or you can push it to its max speed of 140ish for a teeth-gritting thrill. But it’s not a freeway cruiser.

It’s more at home on back roads, leaning deeply into bends with no need to slow down on gravel. In city gridlock, the tall, upright riding position gives a good view over traffic and it’s easy to flick between lanes and thread a car-beating route.

If gravel rural roads are as adventurous as you’ll get, the GP450 RS version comes with stiffer suspension, a larger front brake rotor, a second-set of 17-inch wheels and other upgrades to turn it into a supermotard for $16,999. 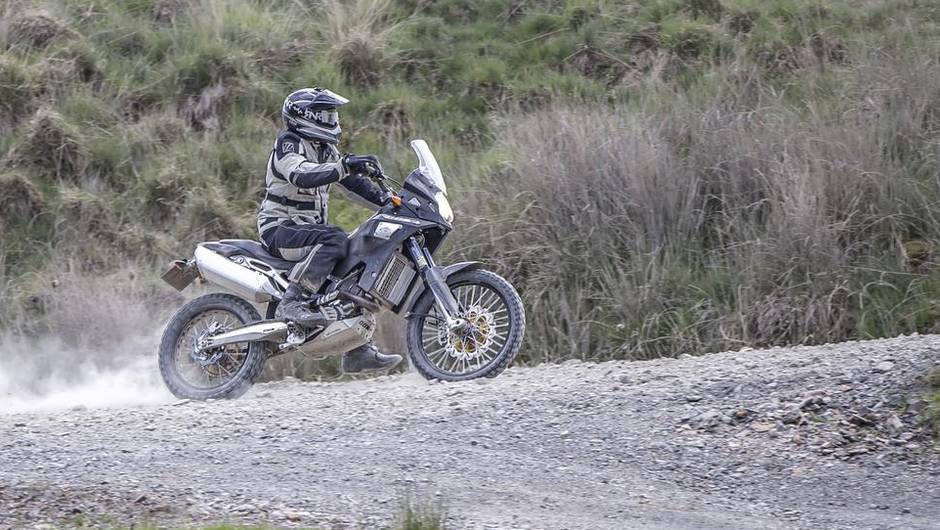 With styling borrowed from Dakar rally racers, the CCM looks most at home off the roads and in the trails. And it is. There’s a nice narrow pocket between the widest area of the saddle and the flair of the gas tank to stand comfortably and grip the bike with your knees when the going gets rough. The 24-plus centimetres of suspension travel front and back easily handle rocks, roots, logs and whoops and keep the rear tire planted to tractor over obstacles and up hill climbs.

In first and second gear, you can thread your way through single-track until your arms give out, and stretch it out in third when the trail opens up. The only part of this bike that will let you down when the going get rough are the street-biased tires that come standard – which would be the first upgrade should off-road adventure be calling. There’s also an aluminum bashplate and hand guards in the accessory catalogue. 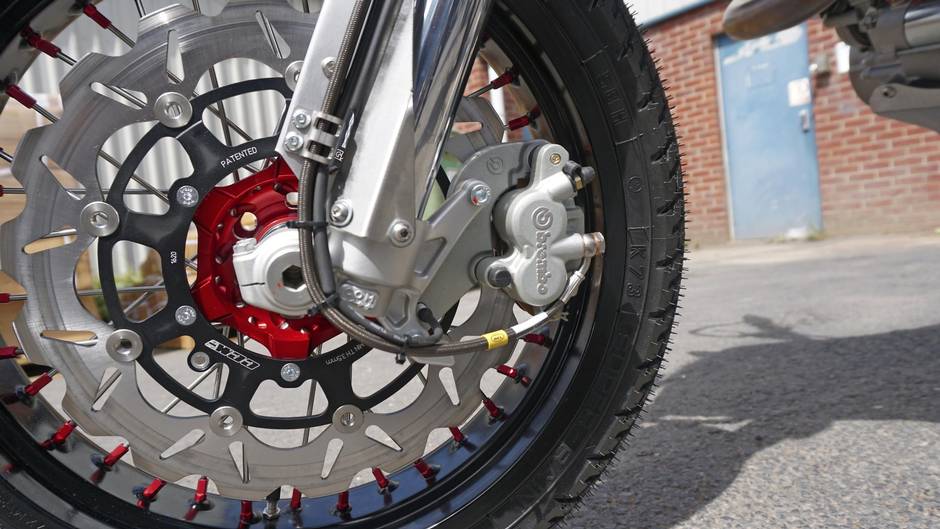 For the long haul

Adventure travel is the epitome of adventure biking. While around-the-world riders and dreamers love to debate the merits of one bike over another, the consensus is that smaller is better if you’re off the beaten path.

When the going got rough for McGregor and Boorman in Mongolia, they had to push, paddle and pick up their fallen BWMs several times. Their cameraman sailed past, meanwhile, on a Russian-made 350cc loaded with all his luggage because his BMW needed repairs.

The GP450 is already travel-worthy with a long-distance fuel tank and 194-kilogram payload capacity (25 kilograms less than the BMW R1200GS Adventure). The GP450S version adds luggage frames, soft bags, engine protection and other upgrades for $16,499. There’s even a full crate available to get it to where the adventure begins.

Once the reliability of the GP450 has been proven and they become available on the used market to attract the budget-minded traveler, we’ll see if it’s really up to the challenge of going the long way to wherever.