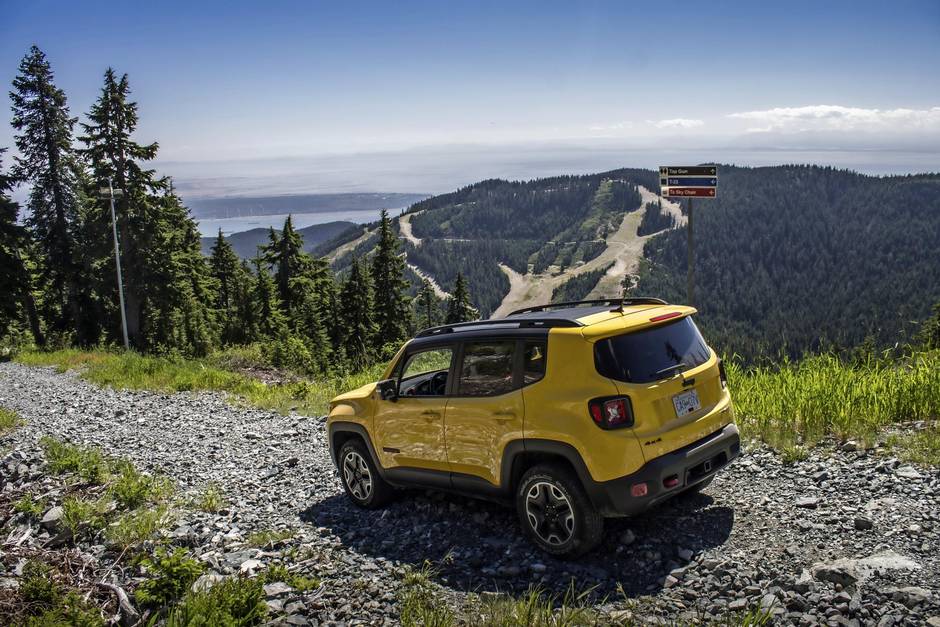 One of the lasting mysteries in the Jeep legend is where the icon got its name. One camp has it that “Jeep” is soldier slang for GP, the General Purpose appellation the U.S. Army bestowed upon the original stout mechanical donkey. Another suggests that the name came from Eugene the Jeep, a cute, yellow, fun-loving cartoon character from 1930s Popeye comics, halfway between a wallaby and a leopard.

Meet modern Eugene. The Renegade is Jeep’s smallest and newest offering, attempting to capitalize on the brand’s rough-and-tumble image in a compact crossover package that’s more livable day-to-day than a Wrangler. A crossover? That doesn’t sound Jeep-ish.

What’s more, the latest machine to bear a badge representing American can-do spirit comes from Italy, built on a platform shared with the Fiat 500X. Thus, when this bright yellow OtterBox showed up, I immediately called up my local search and rescue team and started planning a mountain ascent. Would the Renegade be a Jeep in badge only, or could it rescue its reputation?

North Shore Search and Rescue is a large, well-equipped organization run with a high level of professionalism by its 40-odd full-time volunteer members. With an enormous amount of backcountry to cover and a teeming city so near, it is extremely busy year-round. More than 90 successful rescue operations have been mounted so far this year.

The Renegade, in theory, makes a good case for itself as a vehicle for SAR operations. After all, every member of NS Rescue also has a day job, from emergency-room doctors to small-business owners to postal workers. It’d be useful to have a vehicle which is both adept at handling Monday-to-Friday urban commuter duties, yet also capable of reaching a remote trailhead when called upon. 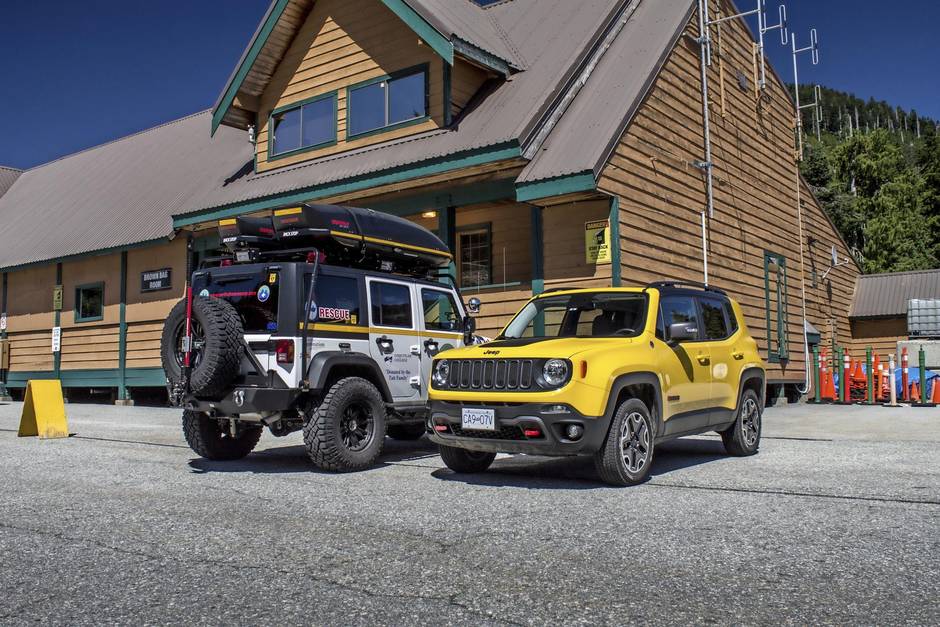 I met up with NS Rescue member Doug Reid at headquarters with a plan to ascend Mount Strachan. At more than two-and-a-half kilometres of elevation, it’s the highest point you can drive to in North Vancouver. We went in convoy, with Reid driving a proper Jeep: North Shore 5 is a 2012 Wrangler Rubicon that’s fully outfitted for rough terrain, with huge tires, skid-plating, a lift-kit and a winch, should all else fail.

What the Renegade has, in contrast, is a lot of Jeep badges all over it. If you’re the serious sort, the number of jokey little Easter eggs hidden all over this car would have you rolling your eyes. The seven-bar grille and round headlights of the original Jeep can be found in the taillights and the speaker surrounds, there’s a map of Moab in the cupholder, and the push-button starter says, “to new adventures.” I glance in the rearview mirror to see a tiny Sasquatch marching along the bottom of the rear window glass. It’s all a bit much.

However, of greater interest is the round badge below the A-pillar, declaring this particular Renegade as Trail Rated. Over the standard Jeep cute-ute, this Trailhawk version gains about 20 millimetres in ride height and full skidplating for the fuel tank, transfer case and front suspension. It also gets a low-range gearbox and a lower 4.33:1 axle ratio. There’s a traction-management system that allows you to select for terrain and hill descent control, and the Renegade’s short wheelbase gives it better approach and departure angles than the larger Cherokee.

Only one powertrain is used for Trailhawk versions of the Renegade, a 180-horsepower 2.4-litre four-cylinder paired with FCA’s nine-speed automatic transmission. The 174 lb-ft of torque on offer doesn’t sound like much, but should be enough to haul the Renegade’s small size up the mountain.

Reid unlocks the gate to the private access at the bottom of Cypress, and we start up the rocky trail. The going is easy at first, little more challenging than a particularly rutted gravel road. Then things start getting gnarly. 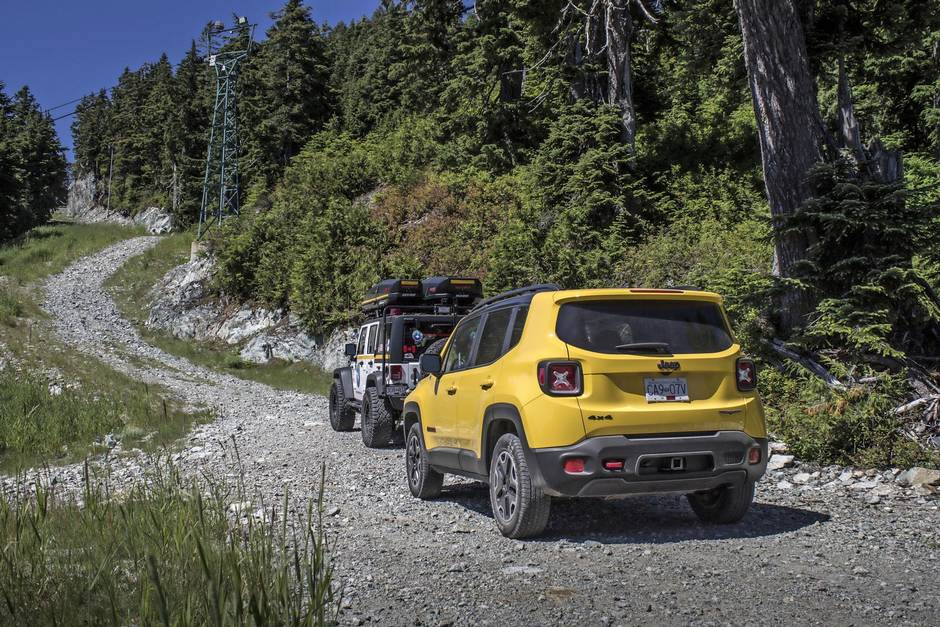 As for our little canary-coloured soft-roader, it rises to the challenge as if part mountain goat. Scrambling along in four-wheel high is no problem for the willing little four-cylinder, and when the slope gets steep and loose near the peak, spinning the terrain-select to Rock and engaging low range has the Renegade climbing with all the aplomb of its big brother.

What’s more, because it’s so small, dodging the bigger upturned rocks is easy. The Renegade cocks a third wheel in places, but can zigzag back and forth across the narrow trail to find the best path. Crossover or not, a mountain path feels like the Renegade’s natural habitat.

At the summit, we pause to take in the beauty. Unlike so many of the tourists who visit here and fail to bring basic essentials, the Renegade is well-prepared for alpine adventure. Unfortunately, upon return to civilization, things are not so rosy.

For such a small vehicle, the Renegade is relatively heavy, weighing in at more than 1,600 kilograms. That makes it pretty slow in traffic. Fuel economy is merely so-so, at 11.2 litres/100 km in the city and 8.0 on the highway. It’s also expensive: The Renegade Sport starts at a reasonable $21,495, but this fully-kitted out Trailhawk is $39,865 after freight and options.

That’s a lot – no wonder the Renegade gets outsold by the Wrangler four-to-one. People seem willing to either put up with the rougher ride of the Wrangler for a more authentically rugged character, or just opt for a total tarmac cruiser.

A bit of a shame, that. Eugene may be cute and playful, but he didn’t falter a step where many so-called off-roaders would have gone home with a flat tire. He may be a costly crossover, but he’s earned the right to be called a real Jeep. 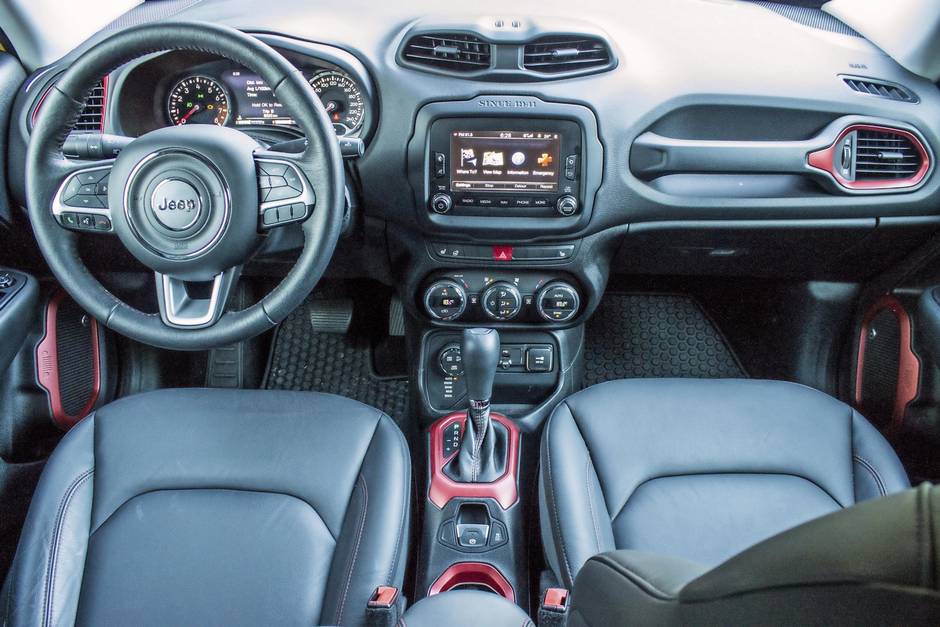