With hybrids available now for almost two decades, the gee-whiz factor dissipated long ago, so a new hybrid has to succeed on the same terms as any other mainstream car.

The Korean auto giant introduced the redesigned mid-sized Sonata last year and, for 2016, launched its second-generation hybrid in several trim versions, with the plug-in model at the top.

The plug-in Ultimate edition has an asking price of $43,999 fully loaded – the only way it comes. A no-charge "Colour Pack" dudes up the already nice interior with blue-tinted leather seats and door trim, with white stitching throughout.

Unlike Toyota with its trail-blazing Prius, Hyundai's Sonata hews to the philosophy that a hybrid should offer drivers minimal dislocation in the transition to electric wheels.

The more transparent and familiar the driving experience, the more likely a buyer might picture the car in his or her driveway. That means conventional controls and instrument readouts.

The Sonata's excellent eight-inch central display can provide all the information you'll ever want on how the hybrid power train is operating at any given moment. But chances are, after some initial scrutiny, it will be relegated to occasional viewing, while entertainment, nav and phone functions do most of the duty.

The 2015 redesign toned down the previous generation's flashier body styling. The plug-in gets a unique grille and front and rear tweaks to reduce drag, but over all, the new car looks more conservative and substantial.

The interior feels spacious and comfortable. There's plenty of plastic but it's the soft-touch variety wherever your hand might land. Rear seating and legroom are good as long as you're not an NBA star.

One compromise is with the trunk, smaller than in the non-plug-in hybrid because of a larger battery pack. There's no spare tire – it's replaced by an inflator kit – and the standard charging cable's bag takes up yet more space.

The dash layout and control positions are well thought out and largely intuitive. A gauge measuring the electric motor's output, battery charging rate and remaining charge replaces the tachometer. A small screen between it and the speedometer toggles through information also available on the big centre-console display.

In EV mode, the Hyundai does a good job of isolating any whining or other noises. A Rolls Royce Silver Wraith couldn't be quieter. That is until the car's internal combustion motor kicks in. It happens sometimes while stopped, turning over with a brief, jarring little shudder, breaking the spell.

That shouldn't happen often. Hyundai claims a 43-kilometre range in EV mode. A week of testing that included stints on the freeway and hilly suburban roads rarely called the 2.0-litre, 154-horsepower gas-burner to duty. The engine probably ran for no more than 10 minutes all week.

The Sonata plug-in gets a larger electric motor than its non-plug-in sibling – 50 kilowatts (51hp) versus 38kW. Its inherently strong torque gave it excellent acceleration from a stop. But keep your foot planted and it soon strains against the car's 1,728-kilogram curb weight until the gas motor kicks in. Putting the power train into sport mode helps, but at the expense of range.

Unless you're passing a semi on a two-lane highway, driving a plug-in hybrid is more about getting up to cruising speed without engaging the IC motor, then wafting silently along while the average fuel consumption readout tells you you're using less than a riding lawn mower.

Some credit for the Sonata's drivability goes to its six-speed automatic, which integrates the electric motor to act like a torque converter. It operates seamlessly and offers manual control if desired.

No one will mistake the Sonata for a sports sedan. It rides comfortably and understeers predictably when pushed on freeway on-ramps. The electric steering is quick and precise but provides zero road feedback.

You'll like this car if ... You like the idea of a car that can operate as an electric vehicle most of the time but don't want to skimp on comfort and luxury.

If you can't afford a Tesla, this is a nice alternative. 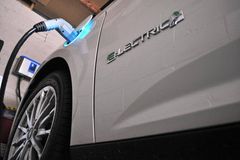 Toyota plugs the Prius back in
March 23, 2016
Follow us on Twitter @globedrive Opens in a new window
Report an error Editorial code of conduct
Due to technical reasons, we have temporarily removed commenting from our articles. We hope to have this fixed soon. Thank you for your patience. If you are looking to give feedback on our new site, please send it along to feedback@globeandmail.com. If you want to write a letter to the editor, please forward to letters@globeandmail.com.
Comments