‘Miata” is an old High German word meaning “reward.” “Mid-sized crossover” is certainly not an old High German phrase but, if it were, it might translate to “the work that precedes the reward.” There will be time enough for open-topped roadsters when four becomes two, but in the meantime, you’re going to need room for that stroller. 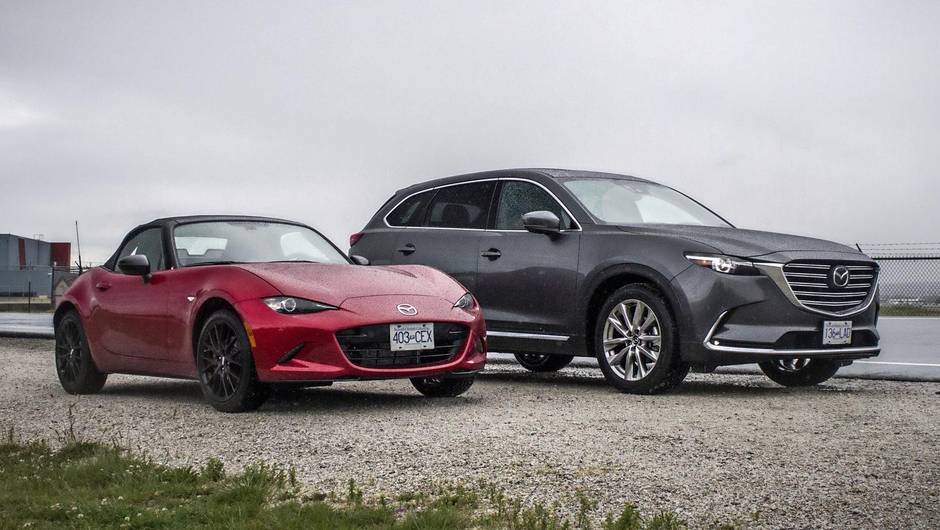 But hang on, says Mazda: We engineer a little fun-to-drive character into all our cars. Our new CX-9 might have three rows, but it’s still a driver’s car.

To test this theory, I first planted the kids with the grandparents to flee north in a Soul Red MX-5, then ran essentially the same route with the rug rats. The question: Can you still have that horse-and-rider-as-one feeling when you’ve hitched your Mazda up to the wagon of everyday family needs? 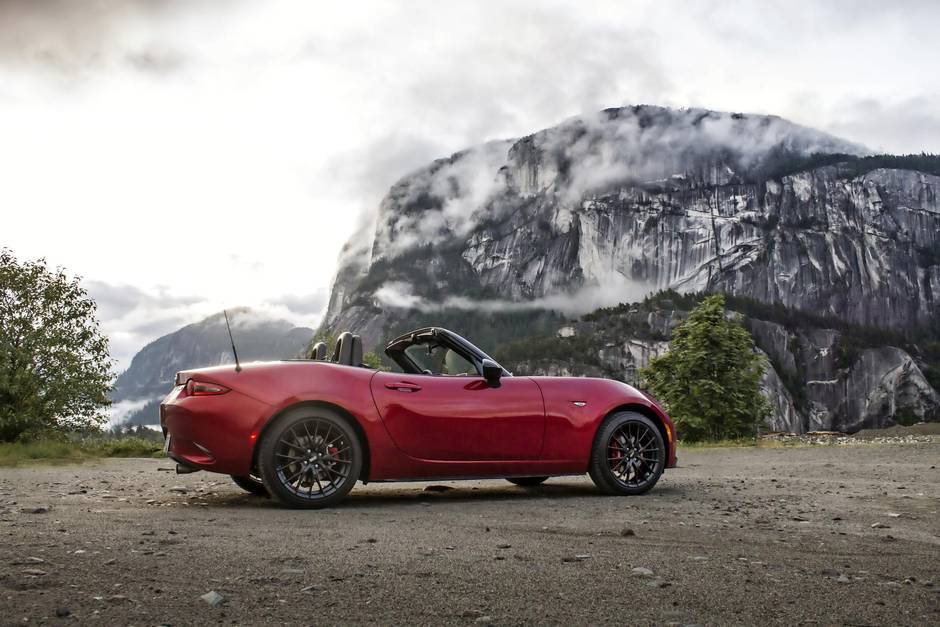 First, the MX-5 needs no introduction. This particular version was the Sport Package, equipped with BBS alloys and Recaro seats. What a wonderful little car: Stir up the fizzy 155-horsepower 2.0-litre and hammer it right through the gears on the road to bliss. The Sea-to-Sky highway has more than its fair share of speed traps, so it’s a joy to drive something modern that’s not wildly overpowered. 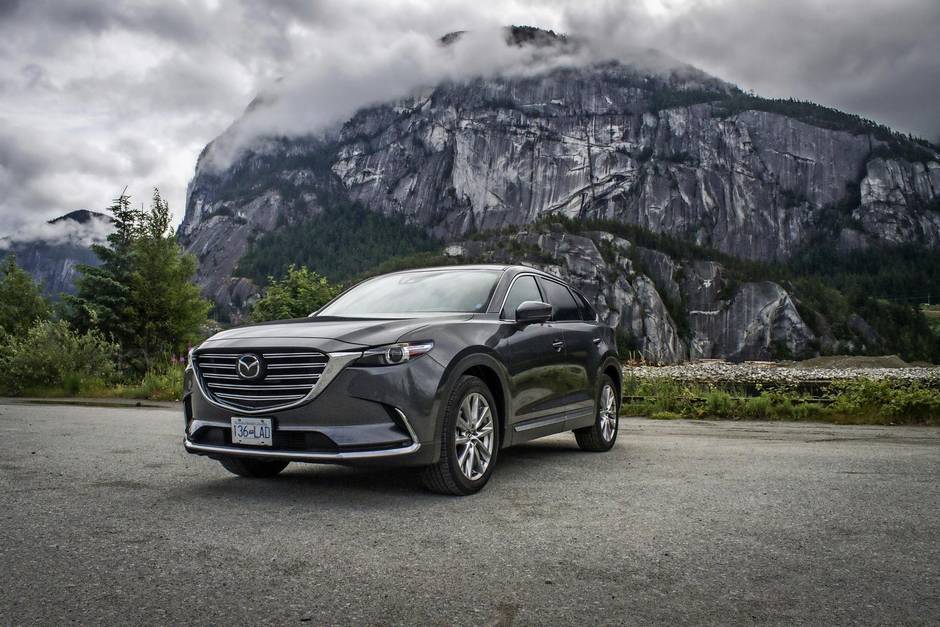 Now, meet the new CX-9. All-new from the ground up, this is the last Mazda to receive the full suite of modern styling and engineering changes. It is the largest and most expensive Mazda in the lineup, but is also slightly smaller than last year and loses the old V-6 for a smaller displacement four-cylinder engine. Remember how outraged people were when the MX-5 lost 12 horsepower in the name of efficiency? Some 46 horses have fled the new CX-9’s barn, leaving it with around the same power rating as an early Subaru WRX. If you fill it with premium fuel, something the old 3.7-litre V-6 did not require, it’ll make 250 horsepower. Otherwise, it’s a modest-sounding 227 horses at 6,000 rpm.

However, just as with the MX-5, there’s more here than just numbers. First, the CX-9’s 2.5-litre turbocharged four-cylinder makes a stout 310-lb-ft of torque at 2,000 rpm, regardless whether running premium or regular. It’s also a lighter vehicle than the previous model, with much of the weight coming off the nose thanks to the lighter four. The all-wheel-drive version is 148 kilograms lighter than the old CX-9 AWD.

Before delving into the performance, it’s time to load up both vehicles for their respective trips. The MX-5 suits a suddenly-carefree couple, and with a bit of creative packing, the trunk swallows enough for a weekend getaway. The CX-9 needs to haul considerably more stuff, not least of which is a pair of modern child seats, each about the same size as a first-generation Miata. 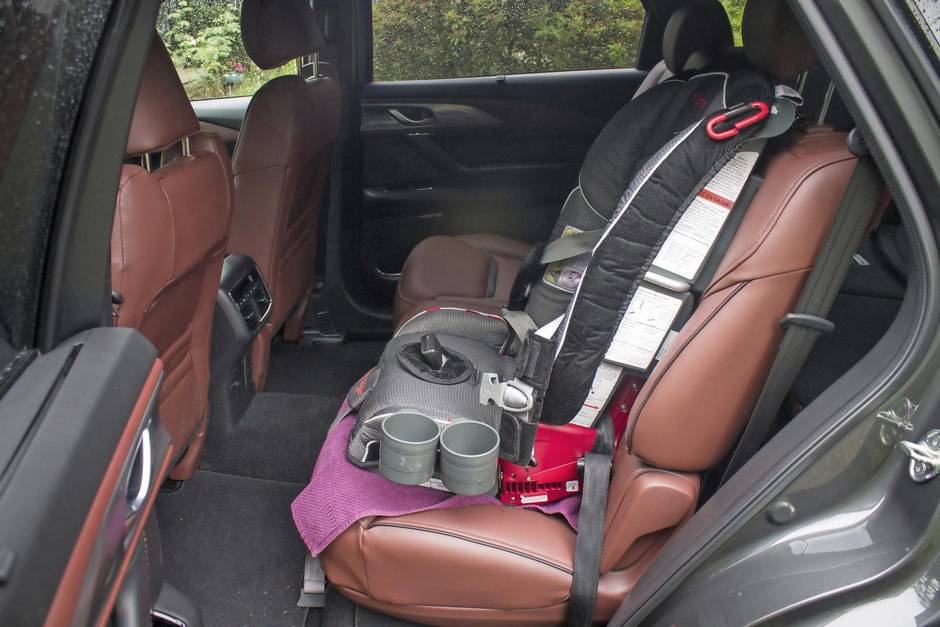 Funnily enough, the CX-9 doesn’t feel like car seats were really part of the plan. Unlike the Nissan Pathfinder, which has a sliding middle row that works even if there’s a seat strapped in, the CX-9’s second row stays put. It’s also harder for little hands to move than the middle-row of a Honda Pilot.

However, it is roomy, with excellent middle-seat legroom. This is a vehicle for older families, with kids long past their booster seats and eager to sprawl out. The third-row seats are tighter than the old CX-9, and when they’re deployed, cargo room out back is pretty tight. This is worse than a Highlander, but better than a Lexus RX350 or Acura MDX.

And it’s the latter two that the CX-9 is really taking aim at. If you thought Mazda’s three-row looked well-proportioned on the outside, it’s the inside that really impresses, with details such as genuine matte wood around the shifter. The MX-5 gives Mazda an identity as a driver-focused company, and the CX-9 pushes the bar higher as a semi-premium brand: not quite an Acura, but nicer than a Honda. 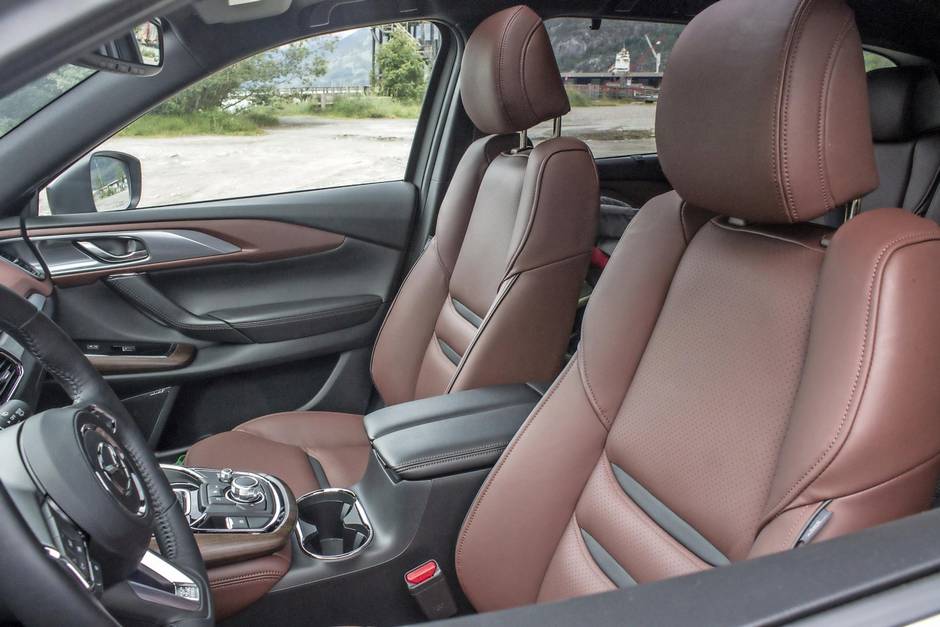 You can’t drive two kids along a twisty road in a crossover in the same way you can bomb along in a two-seater droptop. At least I can’t, but then again, I have an aversion to cleaning vomit out of the headliner. However, the CX-9 is a surprising charmer.

First, that low-end torque is perfectly paired to the mundane six-speed automatic. Where other manufacturers have gone to eight, nine and even 10-speed gearboxes – like they were trying to build bicycles – Mazda’s conventional solution shifts quickly without hunting around. The low-end torque makes for a loping gallop, and provides solid shove up to speed when we run into stoplights near Squamish, B.C.

Even better, there’s also a lightness and deftness of feel here that mimics the MX-5 on a bigger scale. Just as with the rest of the Mazda range, the CX-9 does drive like people who care about driving built it. Unlike its stablemates, however, the turbocharged four actually brings some guts to the table. Mazda needs to get a higher-horsepower variant of this engine into the Mazda6 pronto. Actually, they should stuff it into the CX-3 cute-ute and make a rallycross-ready Mazdaspeed. 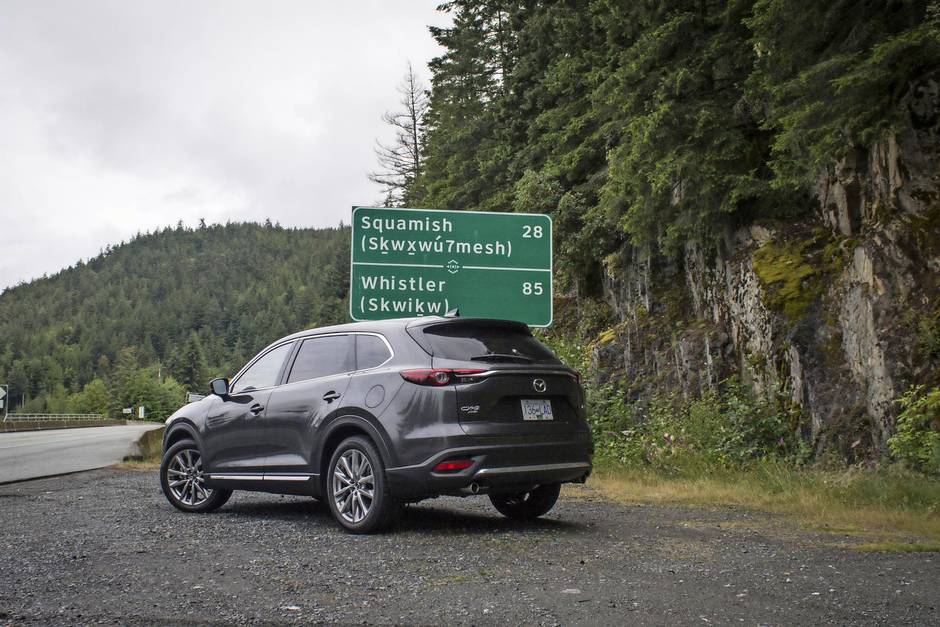 However, all is not sweetness and light. While almost every other Mazda easily hits fuel-economy targets no matter how enthusiastically you drive it, the CX-9 suffers from the curse of turbocharging in the real world. Mixed use over the week with an emphasis on highway driving saw values a little above the city rating for fuel economy. Turbocharged engines can often skew thirstier than naturally-aspirated offerings. Additionally, Mazda’s previous turbocharged offerings haven’t been without flaws. The old Mazdaspeed3 ate motor mounts like they were Doritos.

With those caveats in place, the CX-9 offers a strong play for your dollar. At $52,295, the price of this loaded-to-the-gills Signature edition is made more palatable by Mazda’s typically aggressive leasing rates and stellar unlimited mileage warranty. It is excellent to drive, feels a cut above the mainline brands, and looks sharp.

Regrettably, they can’t all be sunny days with a canvas roof that drops in seconds. The weekend away evaporated all too quickly. And yet, the CX-9 promises that the day-to-day won’t be without a grin or two. I’m not sure what the ancient High Germans would have made of it, but it’s pretty darn good.

You’ll like this car if ... You’re a parent and a grown-up, but maybe not all-the-way-grown-up. 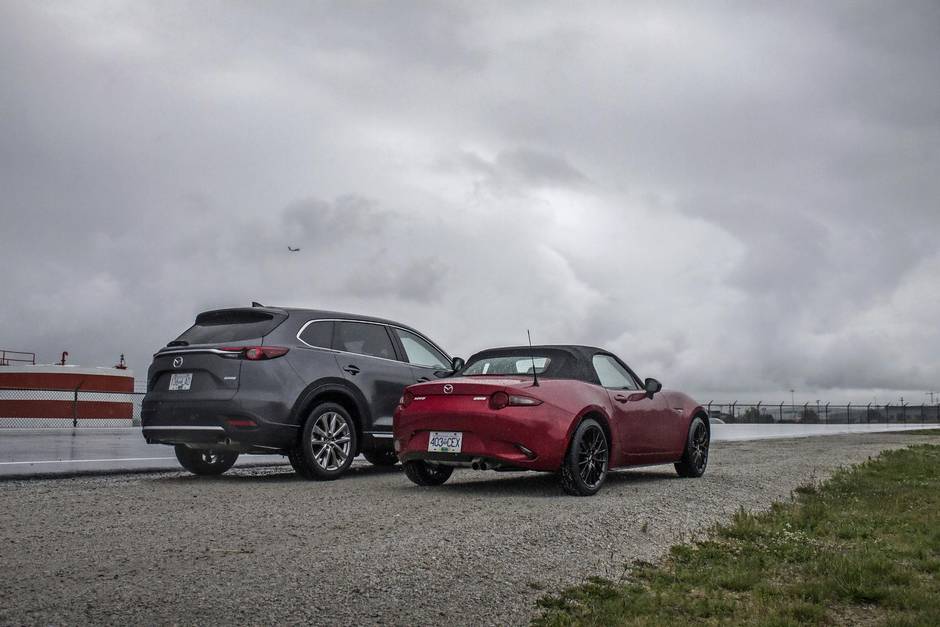 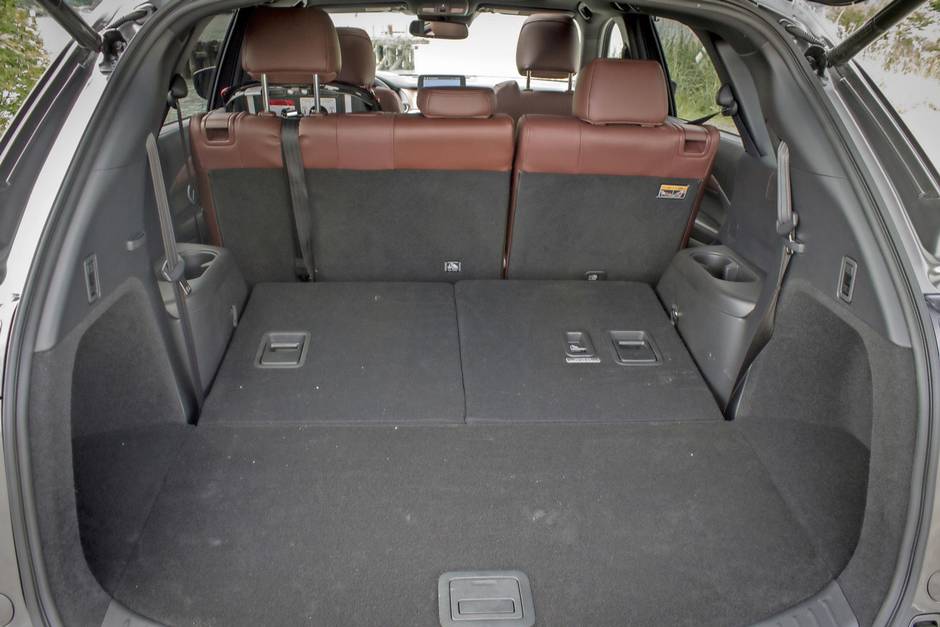 Looks: Imbued with Mazda’s new design language, the CX-9’s dominant feature is its massive front grille and long nose. The 20-inch alloys on the GT model look to be sized right, while the 18s on the volume-selling GS-L look a bit stunted; with tires to fit 20-inch alloys being a bit expensive, maybe they should have split the difference at 19s.

Interior: Like the Mazda6 sedan, there’s an upscale driver-focused feel to the CX-9’s cockpit. Cabin storage is adequate, though I’d like to have seen USB ports in the handy smartphone storage bin ahead of the shifter.

Performance: Ample turbocharged torque is the takeaway impression of the CX-9. Plenty of grunt lets it shake off its curb weight, and passing power is plenty for real-world applications. Like any Mazda, the real charm is in lightness of handling, impressive for such a large machine.

Technology: The adaptive cruise control makes highway commuting that much easier, and the simple rotary-dial and touchscreen infotainment control is as easy to use here as on the CX-5. The proper heads-up display is a nice touch as well.

Cargo: With all three rows deployed, the CX-9’s remaining cargo area is pipped by competitors such as the Ford Edge. Better to think of the third row as jump seats, as the second-row legroom is spacious enough for adults and older kids to spread out. 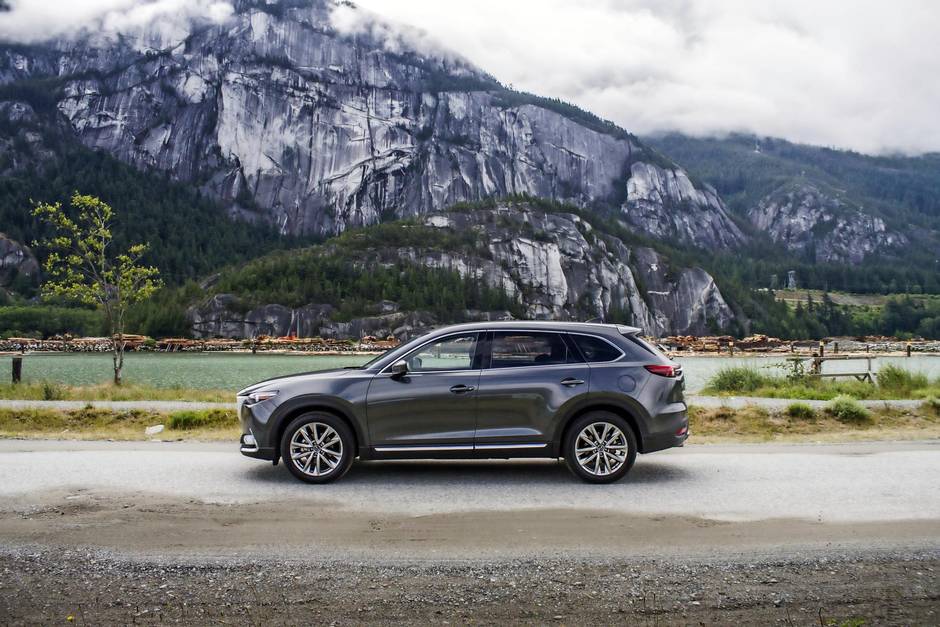 If the MX-5 has to wait until the kids leave the nest, the CX-9 will still put a grin on your face.