Weaving around the sharp asphalt curves that carve through the eucalyptus groves leading to the seaside here, there is not a sound to be heard in the engine-less car.

The storybook magic of Northern California’s landscape has made us forget to breathe; the concentration that flows when you’re trying not to blemish a car on loan has compounded the quiet. A pin dropping would have smashed the silence. Instead, it was pierced by a “meep-meep!” frantically bleated by an oncoming Chevrolet Bolt driver. He was elated to slalom past our cartoonish convoy – a shiny rainbow of new Bolts in orange, blue, black and white – as we wound up and down the hills en route to the coast. 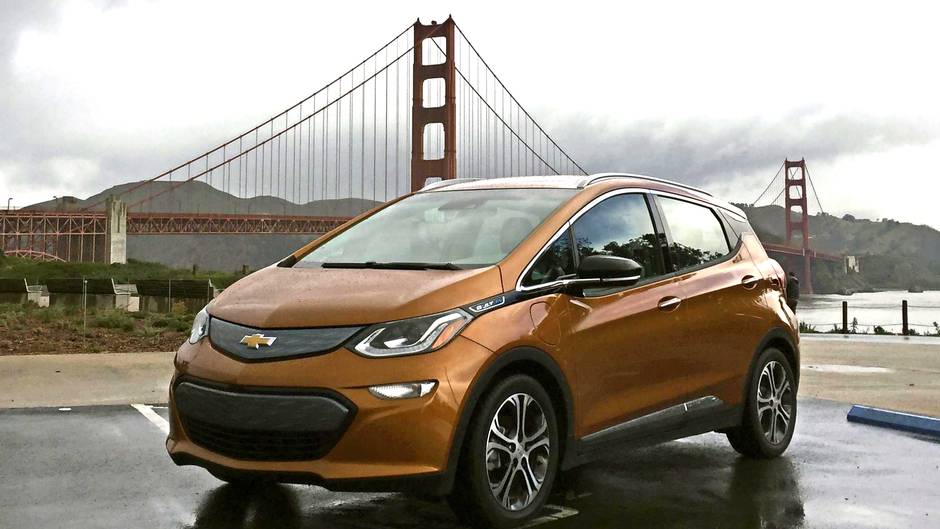 We all grinned as we sailed merrily, quietly along. Of course, we did. We were driving the future of driving, which has finally begun to arrive on Chevrolet car lots across North America.

It felt powerful, capable, practical and, best of all, fun.

The Bolt is Chevrolet’s much anticipated fully-electric, long-range, budget-friendly, family-friendly vehicle. Capable of travelling at least 380 kilometres on one full battery charge, it is positioned as a “small wagon” by the Detroit-based auto maker. It will also compete in the compact crossover segment owing to its spacious interior and high, SUV-like sight lines.

Related: Why you may be driving an electric vehicle sooner than you think

Priced at $44,495 in Canada, the Bolt is poised to democratize electric driving, particularly where provincial rebates will soften its sticker price. A nearly $12,000 cash-purchase incentive in Ontario reduces the consumer cost of a new, 200-horsepower Bolt into the low-$30,000 range. It’s dramatically more affordable than a Tesla, which also delivers long-range, all-electric driving, but at six-figure prices.

While Tesla has promised to deliver a low-cost, long-range electric in its impending Model 3, Chevrolet, the top EV retailer in North America, was first over the line. 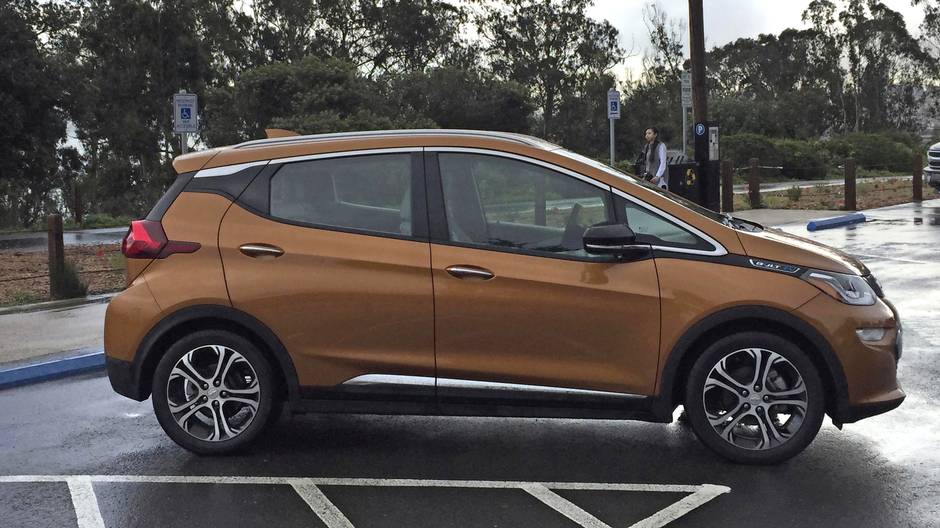 It is the Bolt that truly has the potential to crack open mass EV appeal. Topping the list of arguments in favour is the Bolt’s relatively affordable price. Twinned with that is its long range, which means you can drive it and go about your average day – or several days – without worrying that its 60-kilowatt-hour battery will run out of power. “I don’t even plug in every day any more. I don’t need to,” said Adam Heisel, a propulsion engineer with General Motors and father of two who has been testing the Bolt for two years. “You don’t need to sit on the charger all the time with these cars.”

Instead, he parks it in his driveway and charges up every few days when the battery runs low. A full charge on the 240-volt outlet GM recommends takes nine hours and the My Chevrolet app can be used to ensure the car draws electricity at off-peak hours. Plug into a DC fast charger for one hour (a public network is being installed across Ontario and all Chevy dealers will have one) and you can get an 80-per-cent charge. 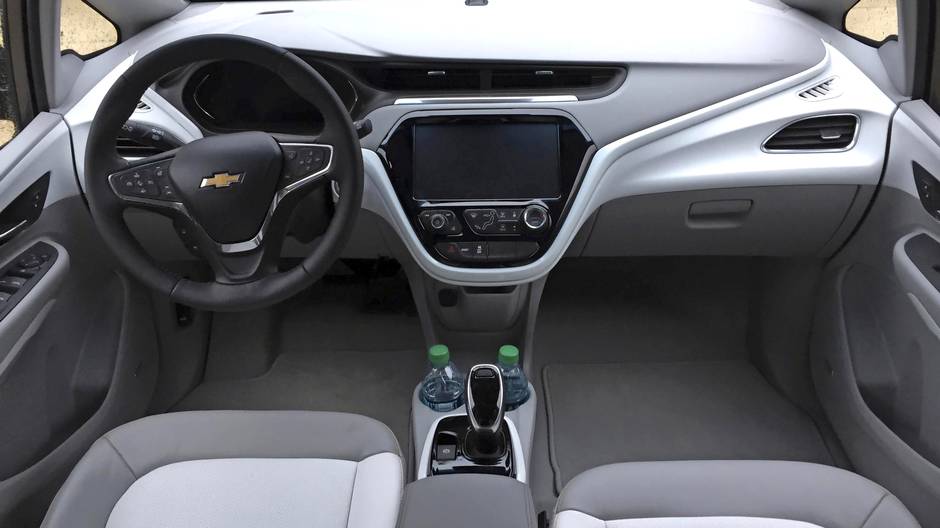 Heisel, who is 6 foot 4, has no problem folding his long legs into the front seat of the Bolt, which has been designed to optimize interior space. The lack of gas engine and all of its connecting parts enabled designers to keep the floor flat in both the front and back. In the front, that means room for a handbag or briefcase beneath the floating dash, a centre console with side-by-side cupholders and a pocket for built-in induction phone charging. In the rear, where there is still enough space to fit a six-foot-tall person behind Heisel, two passengers fit comfortably, but you could squeeze three. The flat floor there means passengers can easily scoot across the bench to exit at either door; a fifth passenger wouldn’t have to sit with knees jammed up in the chest. The design is a slam dunk for ride-sharing companies and their passengers. 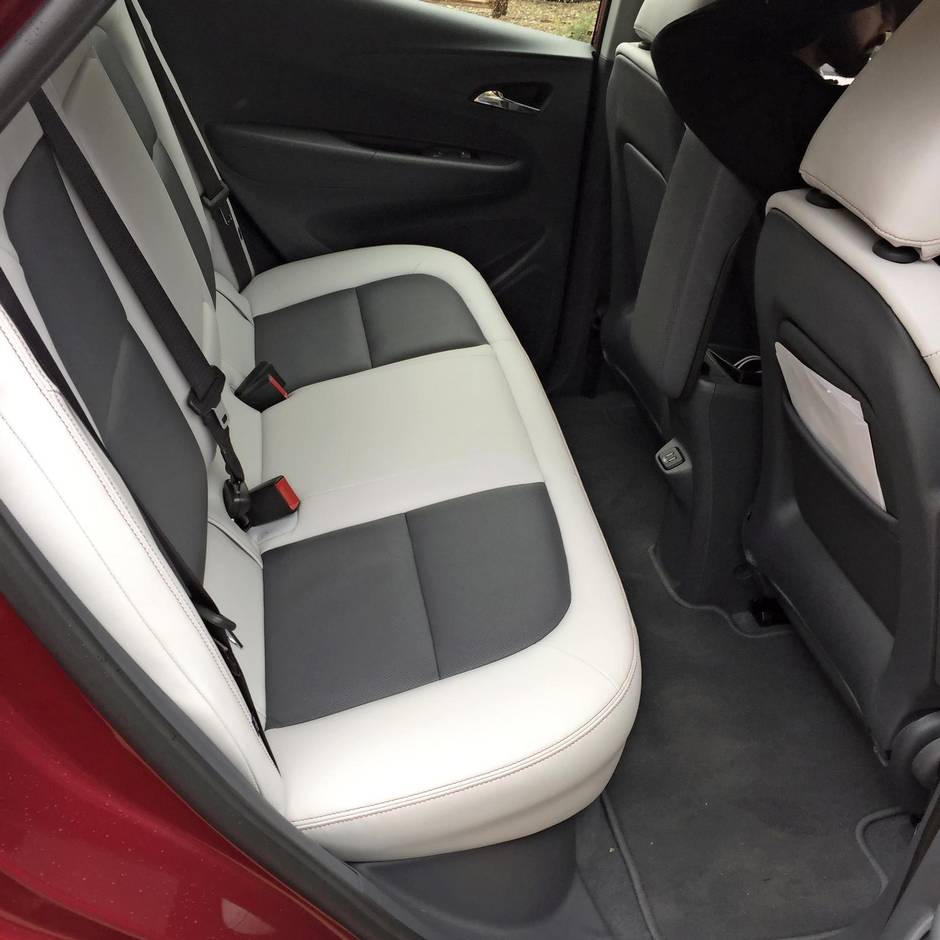 The interior has been carefully tailored and, at first glance, could have been designed by Apple. Its feel is deliberately familiar and fresh. “We didn’t want the car to be a science project,” managing director and designer Stuart Norris said. “As we remove barriers to electric cars … they can’t be weird,” he said.

The Bolt is far from it. With a 10.2-inch touch screen with a black surround, the dash is sparse and intuitive. Instead of faux wood or a stainless look, Chevy opted for moulded plastic in trendy but safe greys. It is stamped with a subtle geometric pattern that adds design flare without going overboard. The colour scheme is repeated in the leather-clad seats, which have bright-coloured stitching that again brings to mind that bespoke feel. Moulded out of plastic, the seats are an inch slimmer in width than traditional seats, a choice Norris made to maximize back-seat legroom. In the Premier trim level, both front and back seats are heated, as is the leather-wrapped steering wheel. While the seats don’t have power, they are six-way manually adjustable and comfortable on long rides. 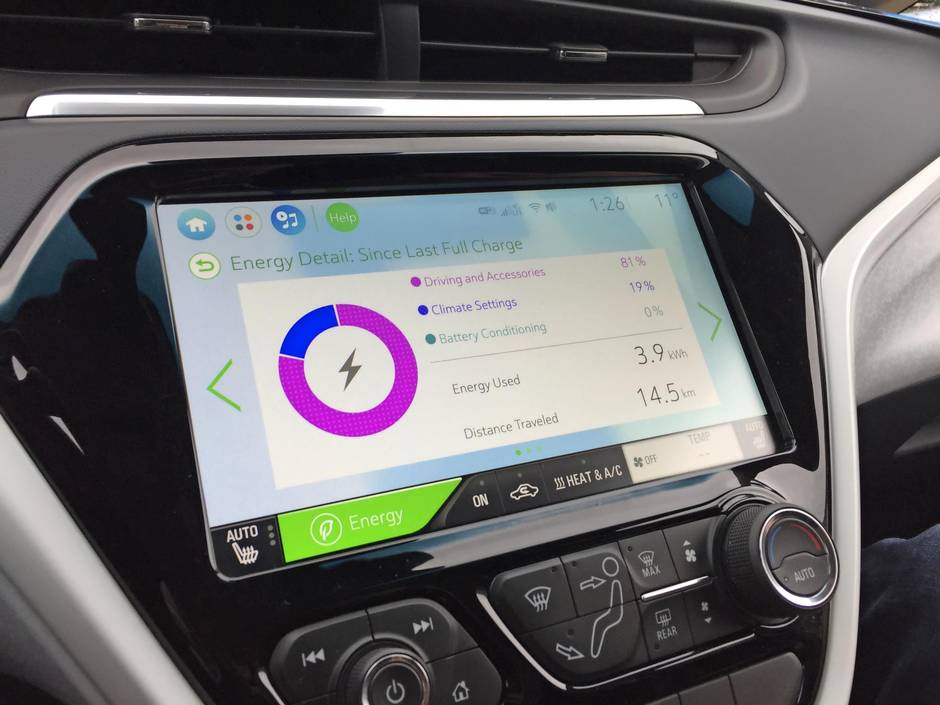 Now, about the ride. No, there isn’t an engine to purr. But you don’t miss it. The peaceful quiet of the electric motor is addictive and buoyed by the Bolt’s instant torque. Slip into “L” mode and you can drive with one pedal – gas instead of brake – to decrease energy use and improve range. A steering-wheel paddle that engages regenerative braking is easy to use. That, combined with three screens that display the vehicle’s energy flow and usage (one even gives you an efficiency score to improve on), gives driving a gamified feel.

It’s a fitting sensation for Chevy’s big (but compact) game-changer. 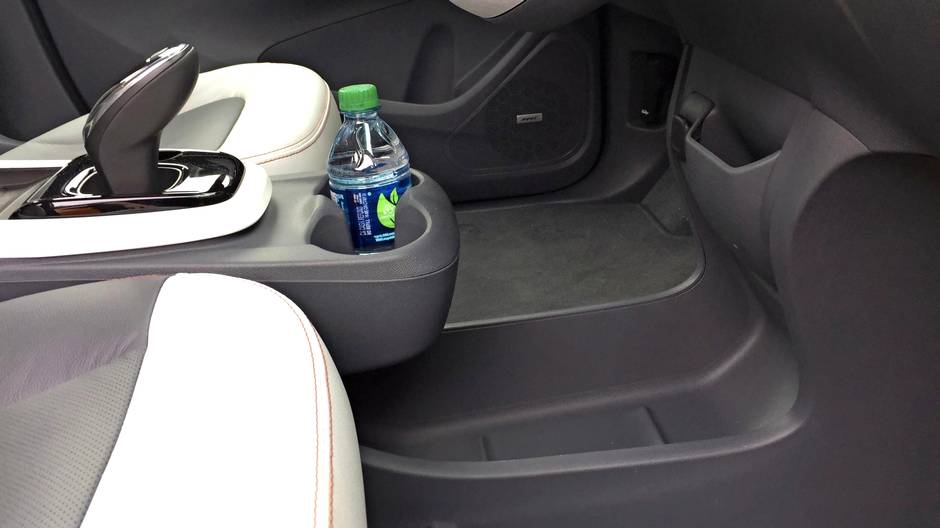 Base price: $44,495 (less with government rebates in Ontario, Quebec and British Columbia) 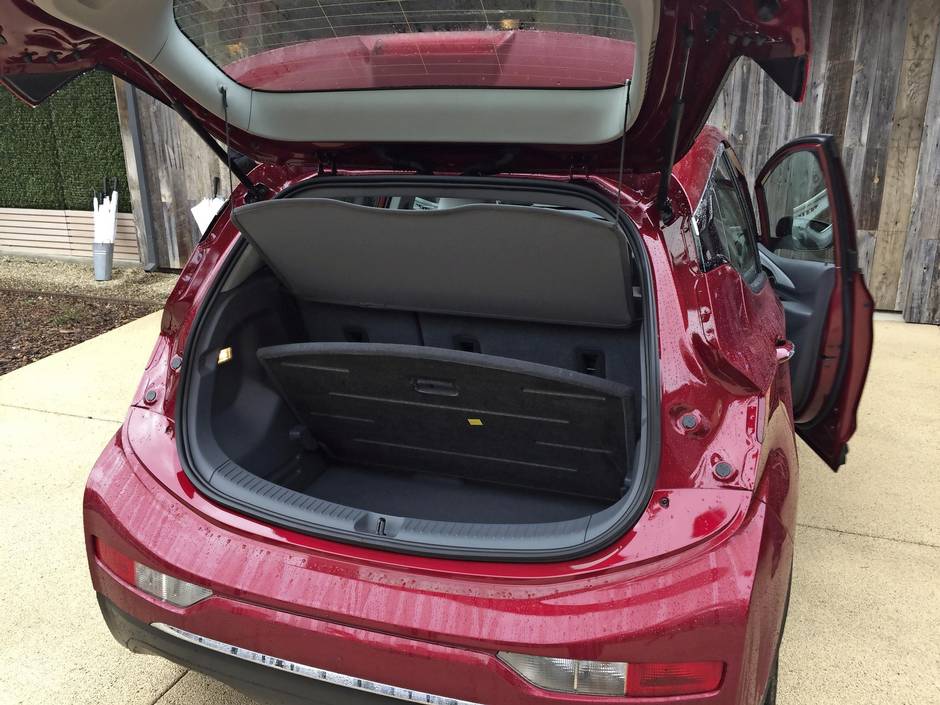 Looks: Deceiving in the best way. From the outside, the sleek Bolt appears more compact than it feels inside. Thoughtful styling cues are woven throughout. We especially like the subtle, monochromatic design on its grille, which has an edgy, tribal feel.

Performance: Zippy, responsive and well powered, or use Sport mode for a boost. With 200 hp and 266 lb-ft of torque, the Bolt goes from zero to 60 km/h in 6.5 seconds.

Cargo: Floating dash creates ample storage space for driver and passenger handbags below. Fold-flat seats in the rear optimize functionality of the available storage space, which is more than Nissan’s Leaf and BMW’s i3. 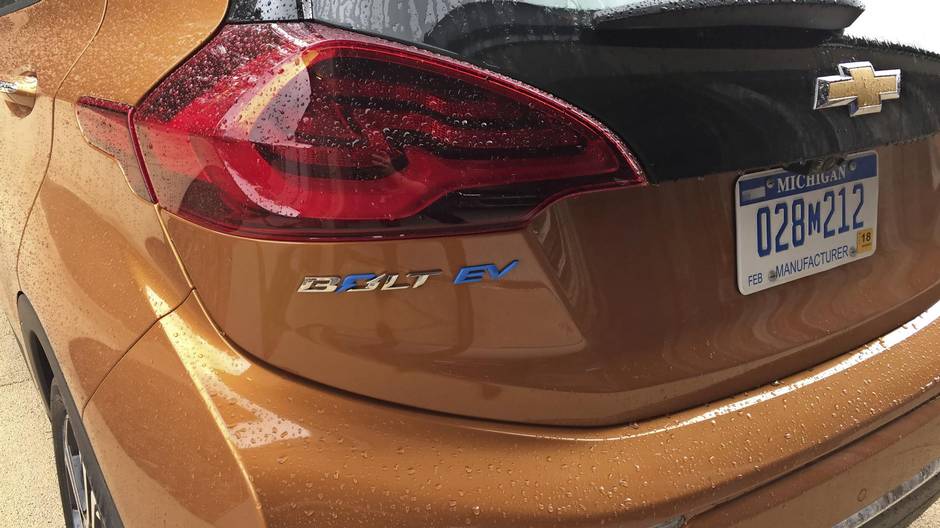 GM calls the Bolt a game-changer and it is. It delivers long range fully-electric driving at a relatively low cost without sacrificing driver enjoyment or passenger comfort to preserve battery life.