For a while, Hyundai almost did the unthinkable. In six of the first eight months of 2011, the newly redesigned Elantra outsold the Honda Civic. Eventually, Honda got its act together and extended its car-sales crown for a 14th straight year, but who knows? If Hyundai hadn't been held back by supply, it could have been an upset of epic proportions.

In 2011, the Elantra was a fresh and striking design challenging a Civic that was nearing the end of its model cycle. This time around, the Civic is fresh off a dramatic re-do for 2016, while this 2017, sixth generation Elantra is more evolutionary. The shape has retreated from last year's dramatic sculpting. And although Hyundai claims a much stiffer structure through increased use of high-strength steel, the basic architecture is familiar.

Hyundai's schtick has always included bang for the buck, and the 2017 takes that to new heights. Would you believe heated front seats, even on the base model? Or a heated leather wheel, plus blind-spot and rear cross-traffic alert, on the mid-range GL? Spring for the Ultimate package and you get automatic emergency braking with pedestrian detection, adaptive cruise, and lane keeping assist. Other notable available features include rear seat heaters, and smart trunk opening.

Still, there's no Bluetooth on the base L trim, satellite radio on the L or LE, and only the top two trims have disc rear brakes. And Civic lets you option its active-safety/driver-assist package on lower-trim models.

The Elantra's mechanical headline is the Atkinson-cycle engine – the first such application in a vehicle that isn't a hybrid. Without getting too technical, the Atkinson cycle is a variation on the four-stroke cycle that enhances fuel economy but usually at the expense of performance. Hyundai has addressed the downside by (among other things) bumping displacement to 2.0 from 1.8 litres. The resulting 147 hp and 132 lb-ft of torque (estimates) are each two more than the old base 1.8 but well below the 173 hp and 154 lb-ft of the 2.0 in the top-trim 2016s.

Hyundai hinted heavily that higher-output alternatives are coming, but for now most buyers will get about the same performance as before – i.e., less than class-leading – while GLS/Limited buyers will lose some. Subjectively the new 2.0 is less peaky than the old 1.8, with better low-end torque. Incidentally, the six-speed automatic is standard on all trims except the basest L, which is six-speed-manual only.

But what about the elephant in the room – the old Elantra's inconsistent-going-on-demented ride? Hyundai revised the rear springs and bushings, but I suspect the transformative change was repositioning the dampers more vertically to follow the suspension travel more directly. This may account for the slight reduction in trunk volume, but it's a price worth paying for the reformed ride. A couple hundred kilometres around southern Vancouver Island failed to reveal any surface interruptions that could induce the old car's "tantrum of thump, shudder and hop."

Also contributing to the ride-and-handling transformation is much enhanced on-centre feel and precision for the steering.

All told, Hyundai has contrived a package with increased mainstream appeal at the same time as Honda has pushed the envelope with a Civic redesign that might be too radical for some customers. It's going to be an interesting year in the sales charts.

You'll like this car if ... The Honda Civic used to be your first choice, but the 2016 redesign has gotten too youthful and sporty for your tastes.

Like its Sonata big-sister, the Elantra trades edgy style and performance for a classier aura of calm competence and solid value. It's a package that should suit most car users just fine. As for engaged drivers, they'll no longer be repelled by the old car's dynamic flaws, but several rivals are still more fun to drive.

The rise of Japan: How the car industry was won
November 5, 2015 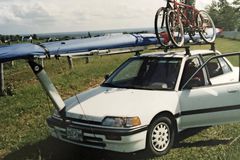