Let’s agree on some auto-electrification acronyms. Sorry to get so tech-heavy up front, but getting on the same page now will save time later as we explore Hyundai’s new eco-warrior, the Ioniq.

So, repeat after me: an HEV is a conventional gas-electric hybrid electric vehicle as pioneered by the Toyota Prius; a BEV is a pure battery-electric vehicle as popularized by the Nissan Leaf; and a PHEV is a Plug-in HEV (think: Chevy Volt) that can be externally charged to provide an initial electric range of typically 20 to 50 kilometres. 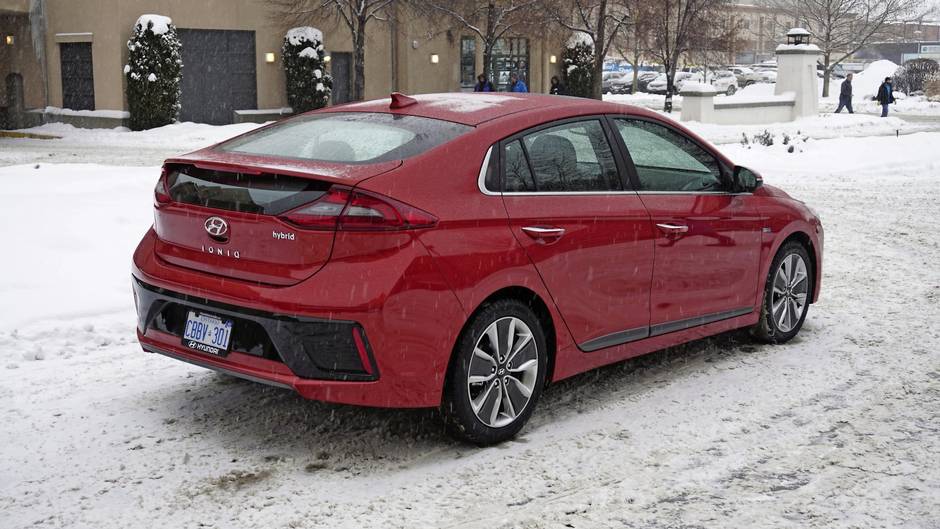 All this matters because, uniquely in the industry, Ioniq will be offered in all three degrees of electrification – HEV, PHEV and BEV. Many rivals are one of those things, a few can be two, but none are all three.

If you’re simply looking to spend less on fuel, have fun with your return-on-investment calculations. Aside from Ioniq’s seven price points (with more to come) and four distinct levels of energy efficiency, there are electrified-vehicle incentives that vary by province and/or according to the degree of electrification (that is, assuming your province even has rebates). 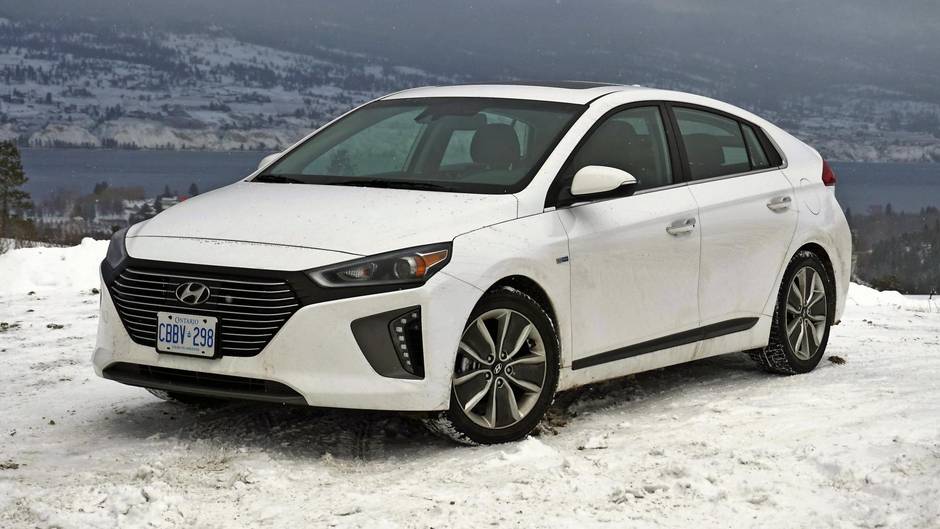 As we expect from Hyundai, pricing is highly provocative. Due in showrooms imminently, the estimated price (there’s no official word yet) for the HEV’s four trims range from $24,000 to $33,000. The BEV’s three trims will run between $35,000 and $42,000 (less provincial incentives up to $14,000). Expect PHEV pricing closer to its launch in the third quarter. 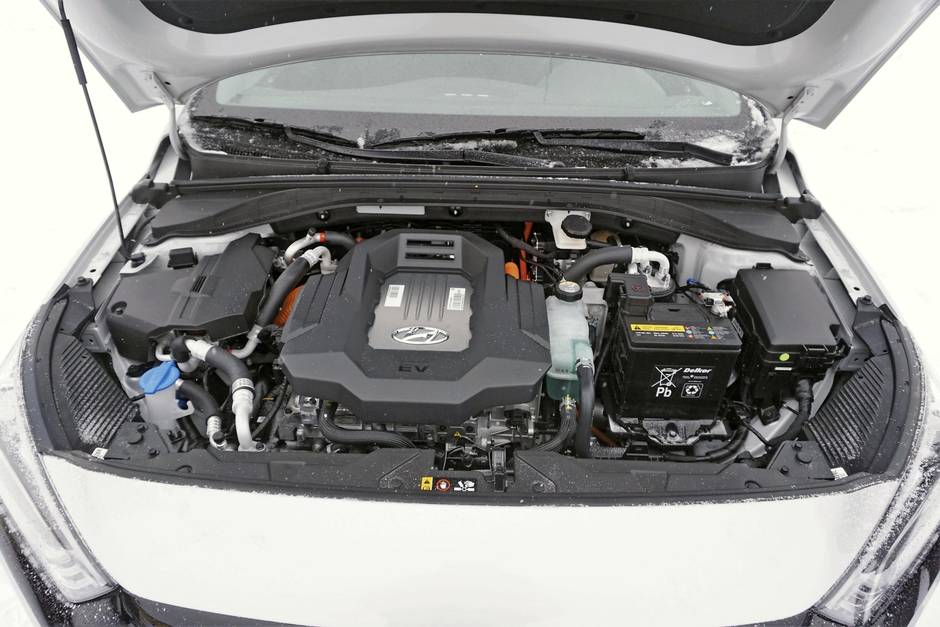 The HEV and PHEV also get a trick multi-link rear suspension, while the BEV’s simpler torsion-beam rear end makes space for its 28-kWh battery; the HEV and PHEV batteries rate 1.56- and 8.9-kWh respectively. Fuel-consumption data available so far credits the base HEV Blue with 4.1 litres/100 km combined, other HEVs with 4.4, and the BEV with 1.7 Le/100 km equivalent. The first and last of those are claimed to be best in their respective classes.

Hyundai Canada’s press preview was side-swiped by a snow dump that the local desert-dwellers were clearly ill-equipped to handle, so driving conditions precluded in-depth evaluation. Suffice to say our time in the BEV seemed to confirm its 200-kilometre claimed range is do-able in the right conditions, and better than any other BEV, except the game-changing Chevrolet Bolt or the big-bucks Tesla. 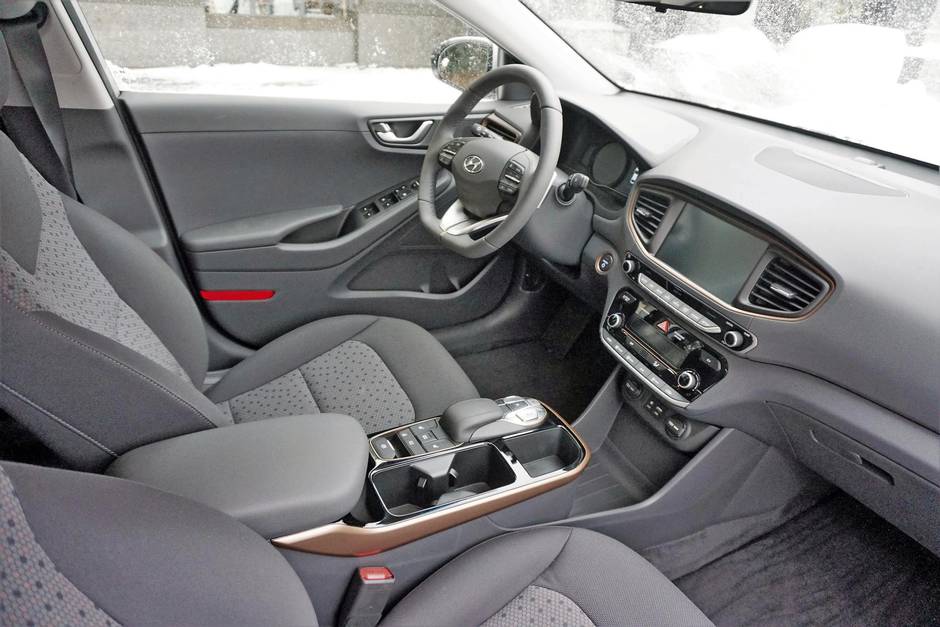 It’s going to be a while before PHEVs are available to drive. By then, warm dry pavement should allow us to better judge the claims for engaging dynamics. Meanwhile, let’s leave Ioniq prospects with one more acronym to ponder: YPYMAYTYC. You Pays Your Money and You Takes Your Choice. 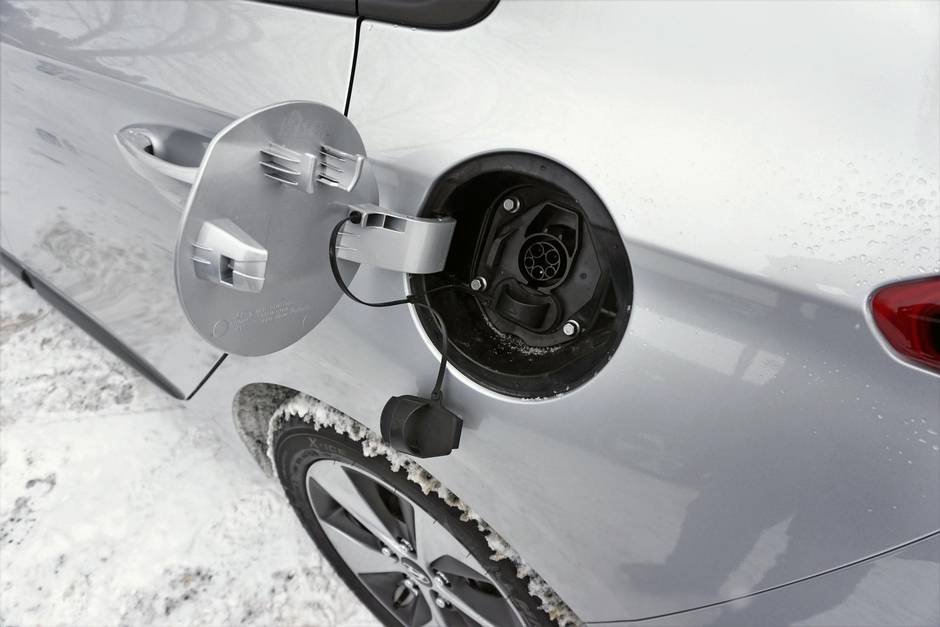 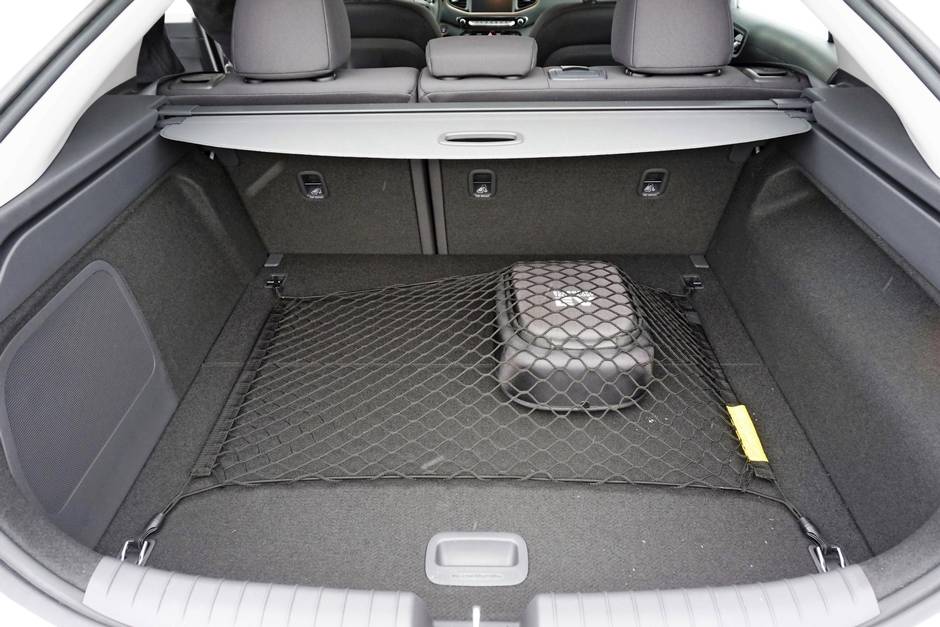 Looks: If Ioniq’s mandate was to not look weird (are you listening, Prius?), it succeeded: it looks like just another stylish but conventional compact hatchback (albeit a little heavy in the rear-three-quarters from some angles). But the mainstream shape belies exceptional aerodynamics: the claimed 0.24 co-efficient of drag equals the industry benchmarks, including Prius.

Interior: Hyundai sought a “purified high-tech” look inside, whatever that means. Each version has its own colour trim accents. At the wheel we found the view of the dashboard and beyond pleasingly normal, ditto the ergonomics. All versions have a hospitable back seat, with competitive legroom, though headroom is a little below par.

Performance: Engaging dynamics? The white-coated drive route demonstrated little more than the transparent effectiveness of the traction-control system. Our BEV was appropriately quiet, and after a 70-km drive through hilly terrain on snow tires (i.e. more rolling resistance), while making full use of all heating amenities, it showed a promising 107 km of range remaining. On a 140-km street drive the HEV proved mechanically refined, the slick six-speed DCT almost as seamless as a CVT but with the familiar normality of a stepped transmission. Indicated fuel consumption: 5.2 L/100 km. Ride comfort was fine on Okanagan-valley roads. As for handing, suffice to say that a quick twirl around a slushy auto slalom showed promise.

Cargo: The Ioniq is a hatchback, with 40/60-split flat-folding seats. Trunk volumes are both near top-of-class among their respective rivals. 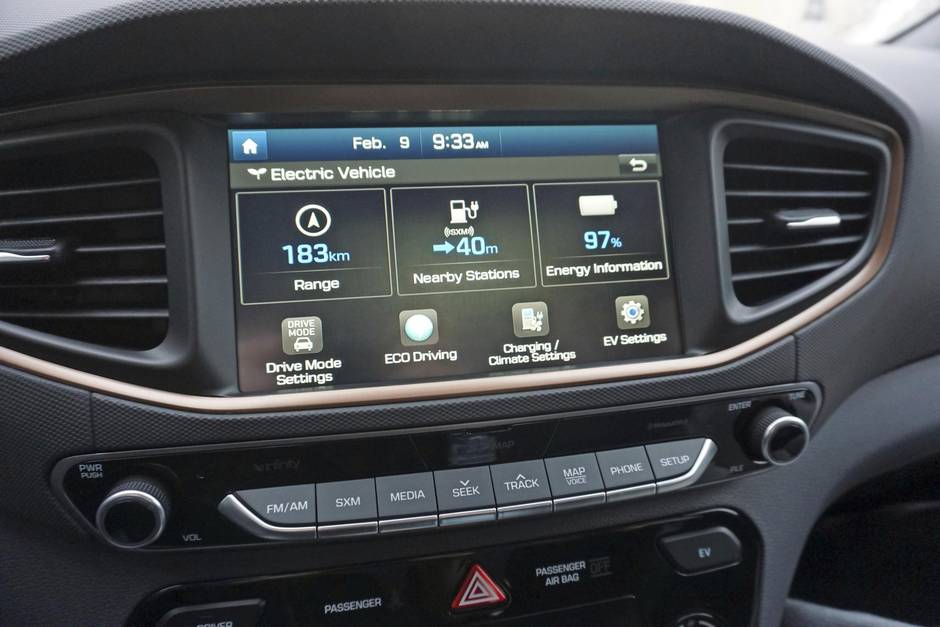 A nice, normal decent-driving compact car that just happens to be a hybrid … or a plug-in hybrid … or an electric car. 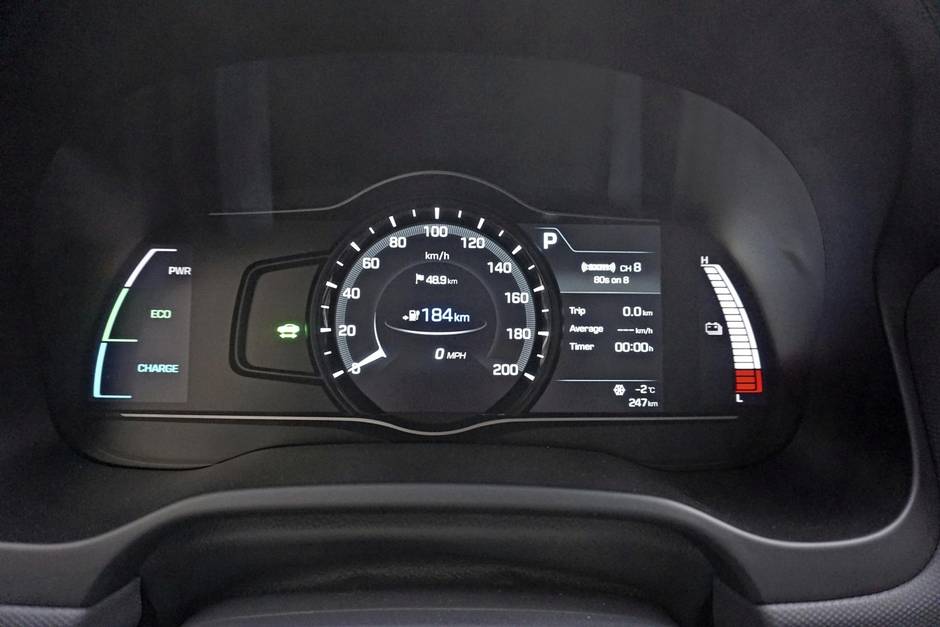 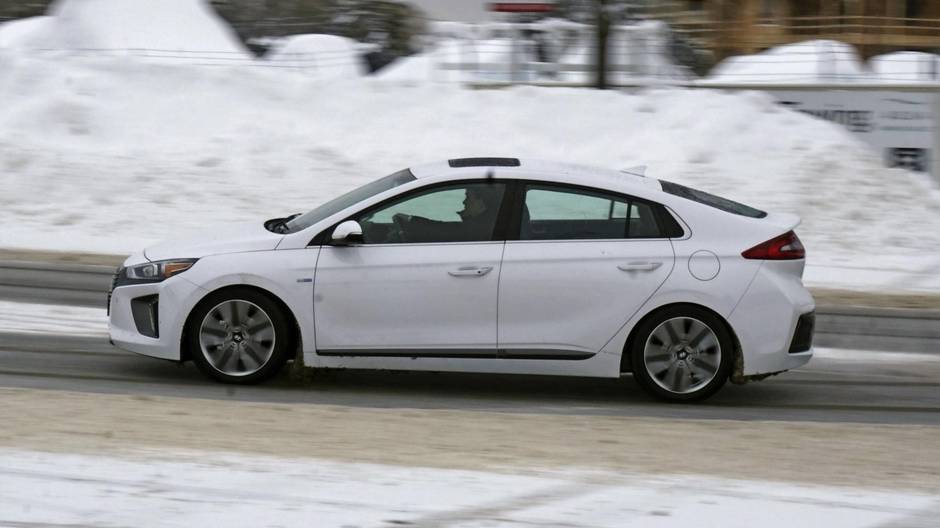