Let us begin at the end. The Prius Prime’s rear hatchback is a marvel of engineering, boasting carbon composite construction and wildly curved glass. Taken apart from the car, it’s like something an Italian coachworking firm might come up with: it resembles an Alfa-Romeo 1900 Zagato Double Bubble.

Yet if this single piece represents a daring move for a mainstream production car, the rest of the changes to the new plug-in variant of the Prius are entirely evolutionary. For the most part, that’s a good thing. 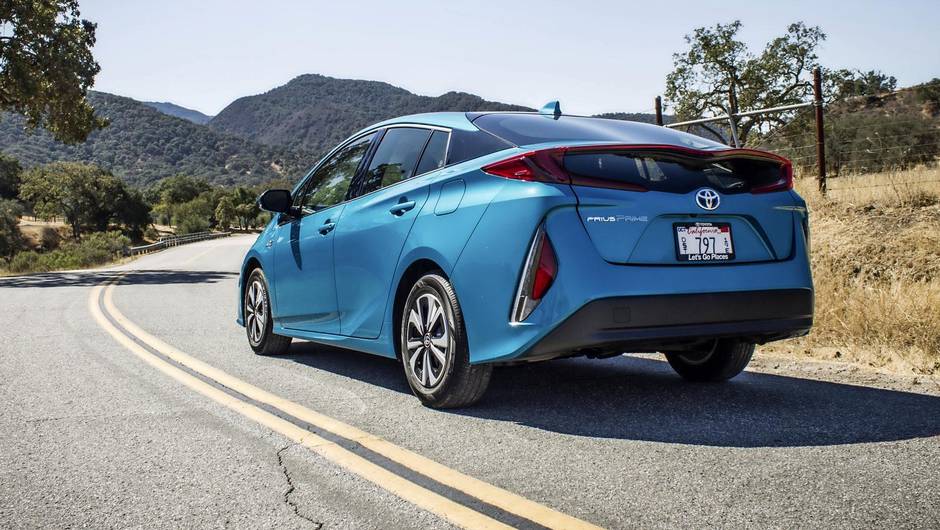 The standard Prius shook things up with some pretty shocking styling. The Prime ups the ante with even less restraint. It looks like a Pokemon that’s grown a goatee.

More photos: Prius Prime inside and out

Quad-LED headlights are now standard, with the inner pair functioning as daytime running lights and the outer pair as highbeams (all four are illuminated under ordinary conditions). The rear taillights are LEDs as well. The wheels are 15-inch lightweight alloys with wheelcovers.

Video: Why you aren't buying a hybrid

Compared to the previous-generation Prius, this new machine is longer with a lower roofline. Automatic shutters in the grille direct flow underneath the car for better aerodynamics. The coefficient of drag, already a Prius bragging point, is now down to as low as 0.25.

Inside, the Prime loses some trunk depth over the standard Prius, thanks to the larger 8.8-kWh battery. The Prime also is a four-seater only; rear seat headroom is improved by a scalloped roof, but this is a less practical car than the ordinary Prius. 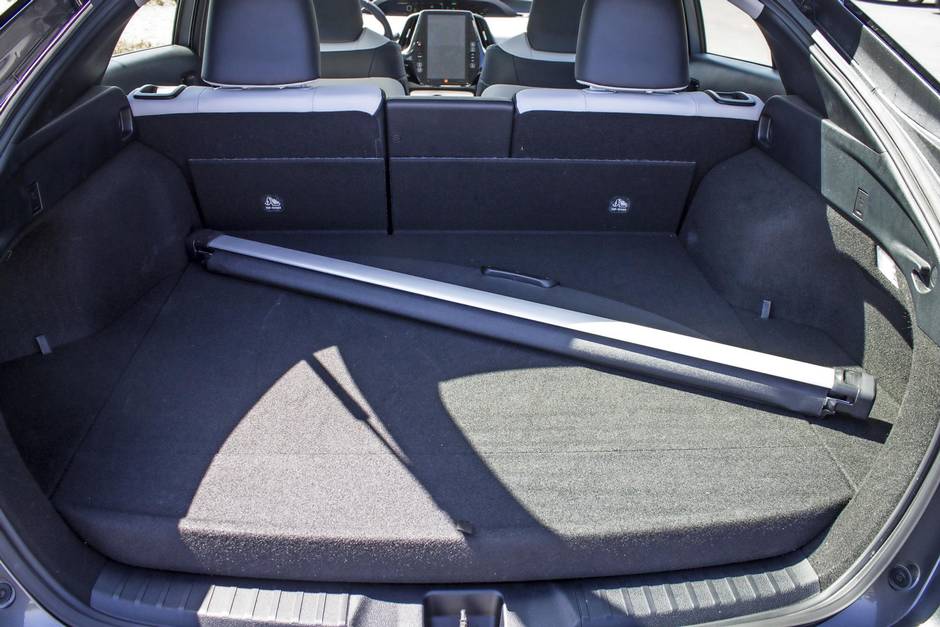 On the other hand, the dedicated commuter will find much to like about Toyota’s newest fish-faced hybrid. The dashboard is dominated by a huge 11.6-inch touchscreen display, such as you might expect to find in an entry-level Tesla. Control of air-conditioning, audio, and navigation are all handled through the main screen, with vehicle information displayed higher up in the centre-mounted instrument panel.

Along with the larger battery pack, which Toyota claims should offer up to 35 kilometres of EV-only range, the Prius Prime gets a new two-motor system that can call on the generator to add more motive force. Top speed in pure EV mode is 135 km/h, meaning the plug-in Prius can be used for your brief highway commute without burning any gasoline. If you’d like to ensure a gasoline-free drive, you can also lock out the gas engine by selecting EV mode – the Prime won’t kick on its four-cylinder even if you floor the accelerator. 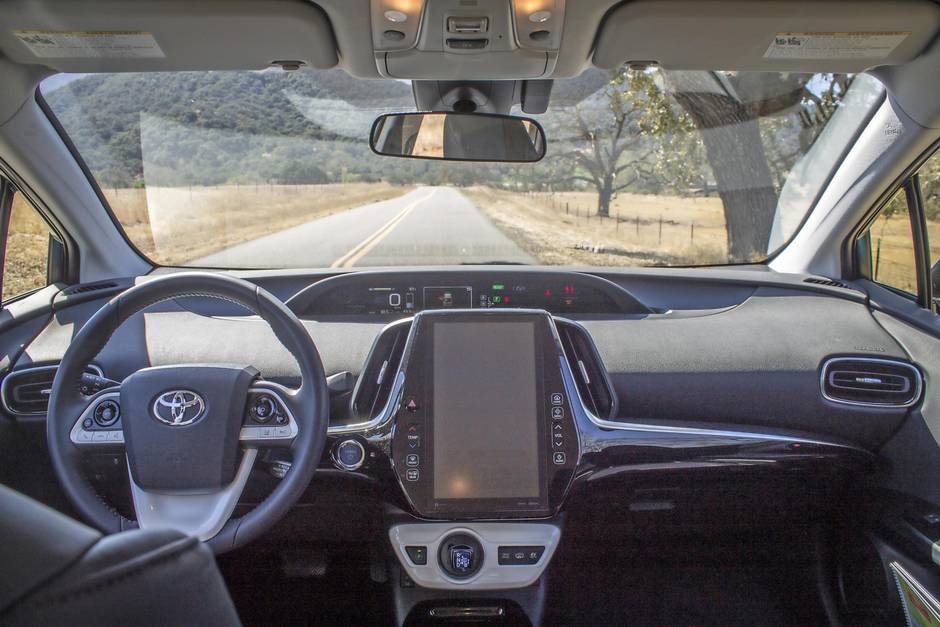 If the huge touchscreen had you thinking Baby Toyota Tesla Fighter, flooring said throttle will soon disperse the notion. In full EV mode, the Prime provides adequate acceleration, but nothing more. Calling on the gasoline engine to help motor up a hill, performance is relatively sprightly, certainly enough to effect passes with confidence.

However, it is sprightlier than earlier Prius models. Handling is also considerably better than the previous-generation car. Toyota’s new global architecture is stiffer, and all Prius models benefit from better forward visibility, and double wishbone suspension at all four corners.

Over the looping canyon roads of California, the Prime felt well composed, climbing past trucks on hills and hoovering up kinetic energy on the downward slope. If you like the idea of an all-electric vehicle for a short commute that can also easily handle a weekend trip, then here you go. 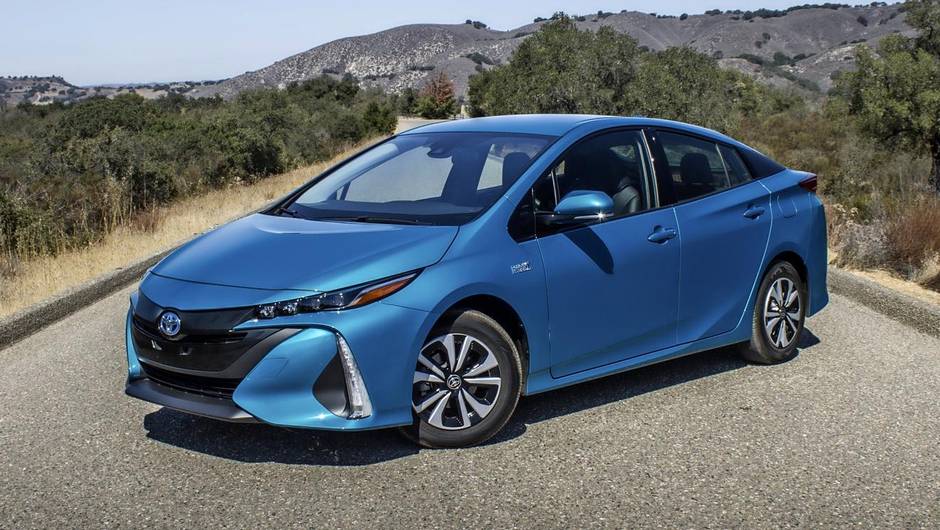 Estimated charging times for the Prime are 5.5 hours on a 120-volt circuit or two hours on a 240-volt charger. Engineers indicated that charging the battery to 80 per cent capacity would take about two-thirds of that amount of time. Thus, if you wake up in the morning having forgotten to plug in your Prime, you can hook it up to a Level Two charger while you eat breakfast and still get to work running on electrons.

In this way and others, the Prime is a deeply unchallenging car to own. It doesn’t have the trunk space of the regular Prius, but its hatchback means it’s livable. It doesn’t matter if you forget to plug it in. Worrying about range isn’t an issue. Fuel economy is excellent, but power and handling are equal to most other mainstream compacts.

While other manufacturers are busy promising a future where electric vehicles provide 400-plus kilometre ranges, the Prius Prime provides a practical solution for the present.

Toyota Canada plans on releasing the car by spring, and is waiting on the outcome of pending rebate legislation to settle on pricing. In terms of fuel-saving, the standard Prius is already excellent, and will be both cheaper and more practical. If the Prime’s premium gets set a little too high, it might not be worth plugging in. 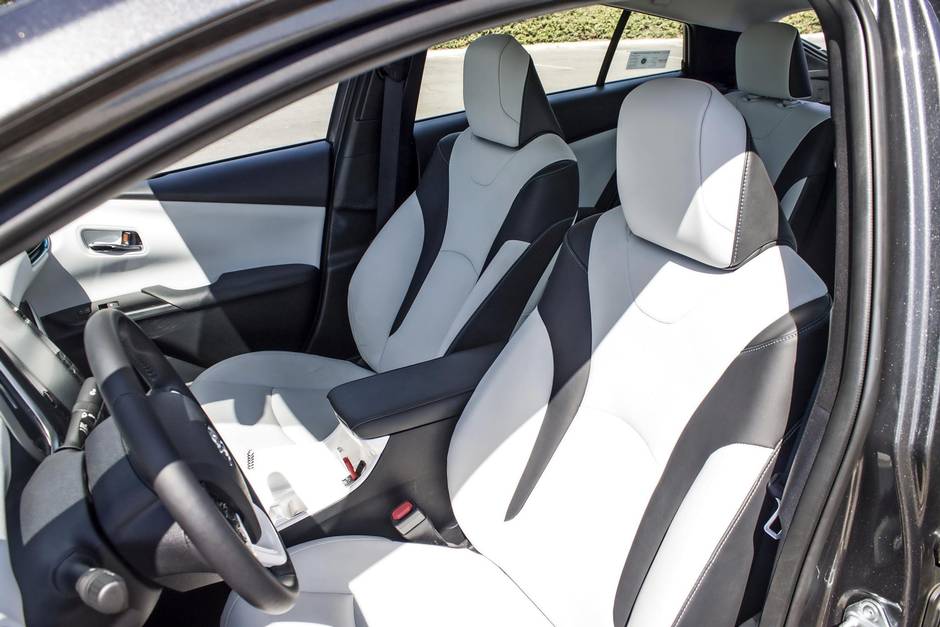 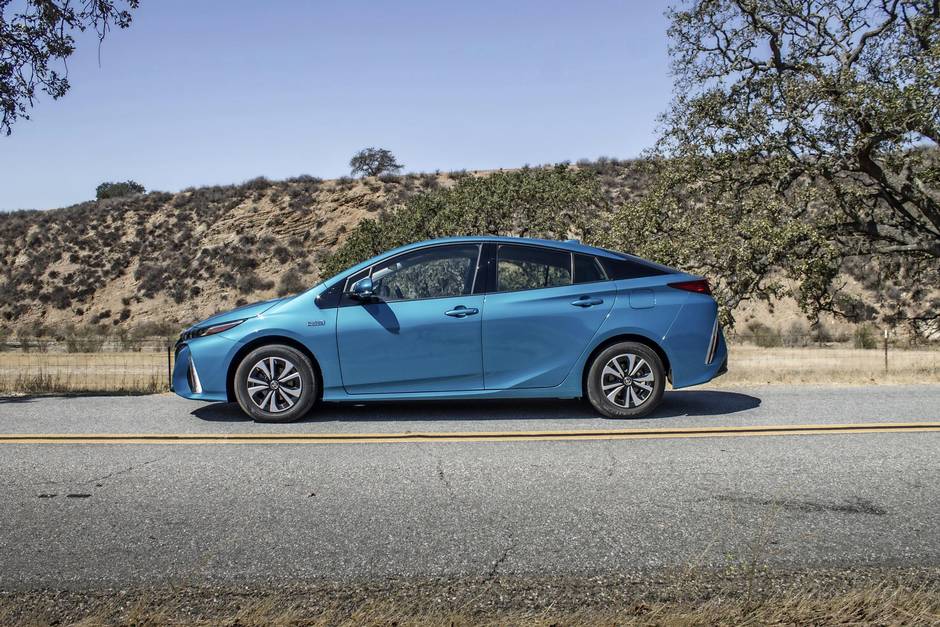 Looks: The Prime’s wild styling seems far too aggressive for a car intended to be ecologically minded. However, have you seen the gaping front end on a Yaris? Or a Camry? The carbon-fibre rear hatch is still the most interesting feature.

Interior: The Prime comes standard with Softex leatherette, a heated steering wheel, and a 7-inch display. Interior quality is hugely improved over the old Prius, which always felt a bit pre-recycled. The showpiece 11.6-inch display will be part of the technology package, at extra cost.

Performance: Increasing the all-electric speed of the Prime required harnessing in a second electric motor, one ordinarily used as a starter for the gasoline engine and as a generator. If you’d prefer to maintain your battery’s charge while on the highway, you can place the Prime’s hybrid system in a new charging mode, which replenishes the battery while running the gasoline engine.

Technology: Perhaps the most interesting standard feature on the Prime is Toyota’s new suite of advanced safety features, which are rolling out to the Corolla, the RAV4, the Highlander, and across the rest of Toyota’s range. Automatic braking and collision mitigation are standard, as are lane-departure alert and automatic highbeams.

Cargo: Installing a larger battery in the Prime reduces its practicality. The trunk is now shallow, and while the seats fold flat, cargo capacity is greatly diminished. 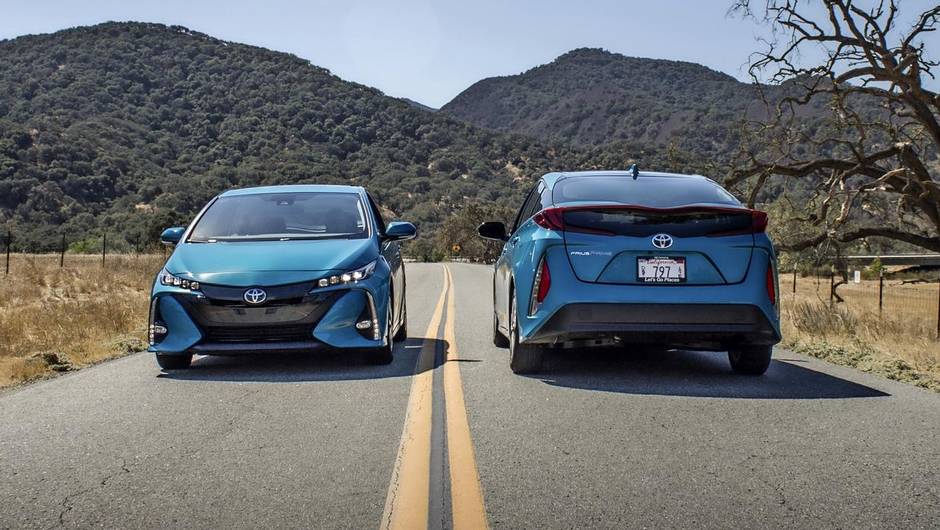