There’s a yellow rotary dial in the middle of the centre console of the 2018 Mercedes-AMG GT R. It’s been, I think, physically separated from the controls that govern how this supercar accelerates, shifts, handles and sounds. All of those switches form a border framing the stubby shift lever and rotary dial that’s used to operate the navigation and infotainment system.

The yellow dial, effectively, separates the AMG GT R from its track-ready competitors – and separates real drivers from mere passengers.

Drawn directly from motorsport, the dial is a driver-selectable, nine-stage traction control system. When you have a car that creates a thundering 577 horsepower and sends every last ounce of it to the rear wheels, traction is an important consideration. When you’re behind the wheel of the AMG GT R and you take to an ultra-fast and frightening racetrack littered with blind turns, it’s a bigger consideration. 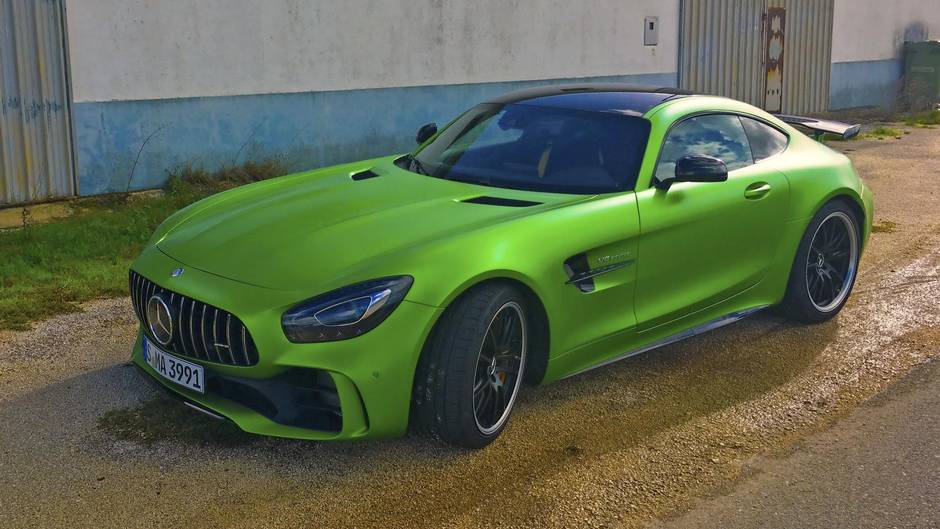 Taking a step back, the (thus far) most powerful version of the AMG GT line has all the engineered and electronic aids needed to keep you safe and sound. The tires are ultra-wide and filled with grip. The fixed rear wing pushes the back end to the ground for increased stability. An aerodynamic undertray serves to vacuum the car to the road at higher speeds. A new active rear wheel steering system helps the AMG GT R corner with greater alacrity. And, if everything still manages to go sideways, a high-performance braking system stands at the ready.

Furthermore, there are five drive modes, including one for “comfort”-able and leisurely cruising … well, not so much in the AMG GT R, but that’s the theory. However, if you should be brave or foolish enough to select race mode – turn off the traction control system and then turn that infamous yellow dial to the left – you had better be a big fan of “non-autonomous” driving.

When you turn the dial, you see a graphic representation of the nine settings in the instrument panel. Leave the dial to the right and you leave well enough alone; the first three stages are coloured yellow for, you guessed it, caution. Snap the dial to the left once more and you enter the red zone; when all nine bars are illuminated, you are literally left to your own devices.

Perhaps all of this makes the 2018 Mercedes-AMG GT R seem like an out-of-control monster. Not true: It’s just a supercar that challenges the driver to raise his or her game. Dare to switch all of the traction aids off, make sure you’re on the right piece of track at the right time, and you’re rewarded with an incredibly balanced and authentically thrilling rear-wheel drive supercar. 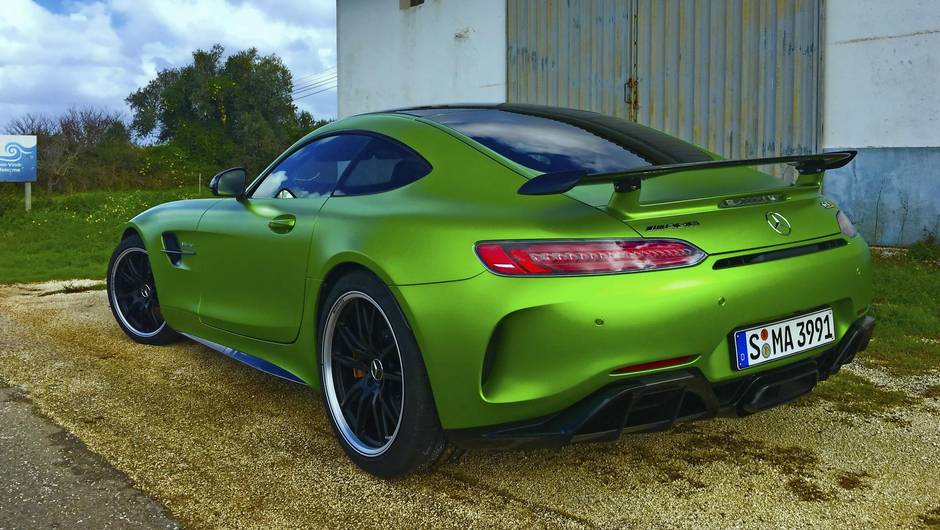 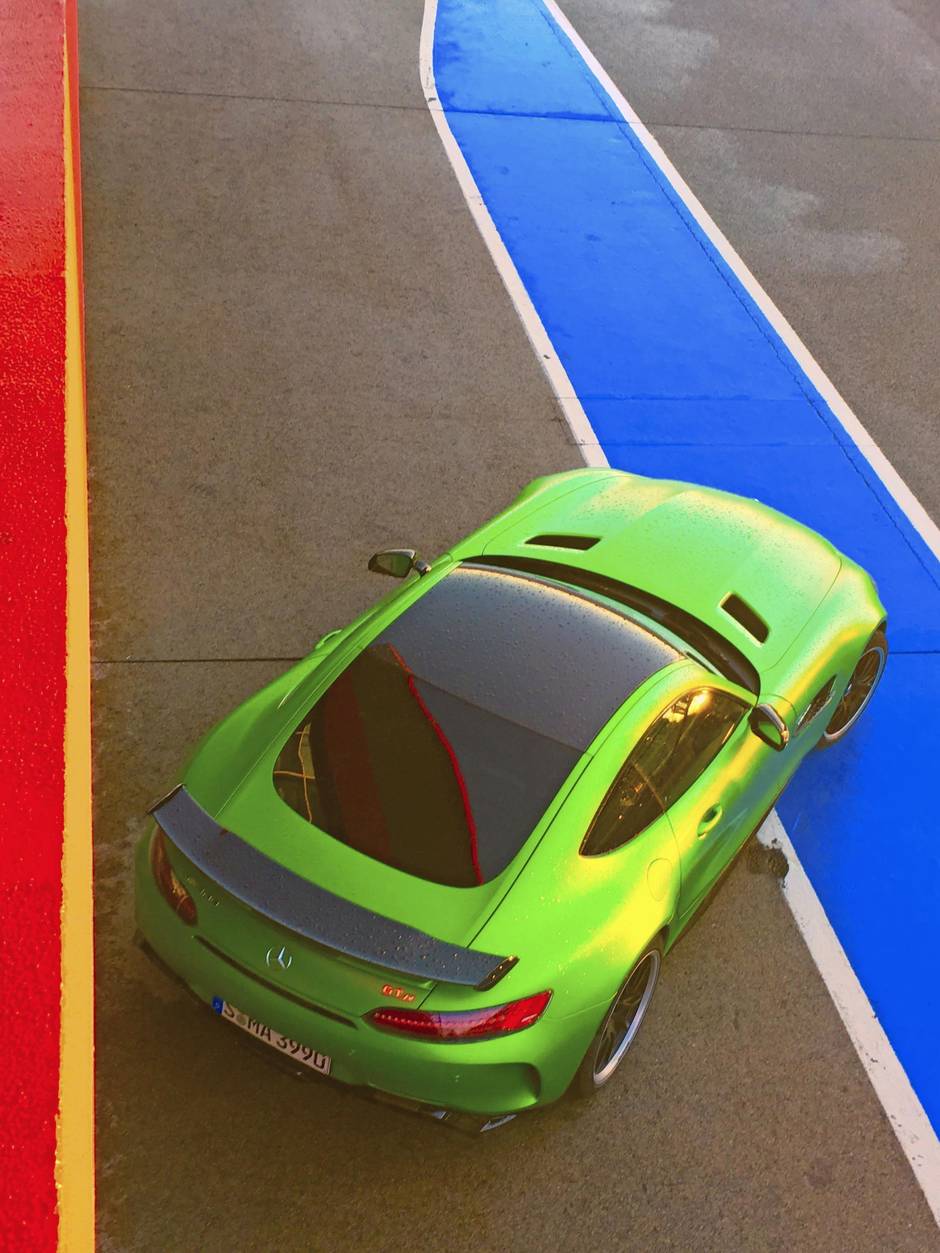 Looks: The milder versions of the AMG GT were already a compelling design proposition. The AMG GT R takes this starting point and pushes past the edge of the envelope with its Carrera Panamericana-inspired front grille, fixed rear wing, aerodynamic bits and pieces, and, yes, optional “Green Hell” exterior paint. This is not the car for slipping away unnoticed.

Interior: The cockpit is, understandably, cramped. But due to some expert work in ergonomics, once you wrestle yourself into the driver’s seat, you will find little reason to shift your position. One big caveat: The manually adjustable race-inspired carbon fibre seats on our test version are not coming to Canada. Boo!

Performance: The AMG GT R is not much faster than the GT S in a straight line, despite 74 more horsepwer and about 15 kilograms less weight. But throw a few curves into the mix, and the GT R roars off into the distance with plenty of yaw and more than a little tire smoke. On a recent trip to the Green Hell (the Nurburgring Nordschleife), the AMG GT R set the “fastest street-legal rear-wheel drive car” lap in history.

Technology: The car has infotainment and navigation systems, plus all sorts of connectivity. But the trickery of the aerodynamic undertray, active air intake system (for better cooling) and race-inspired coil-over suspension system (for consistent contact with the track surface) are the kinds of advances the target buyer will appreciate.

Cargo: There’s a rear cargo area under that tinted glass hatchback that can fit some clubs, but there are no illusions that this is an “everyday supercar” – this is a track car that you could use to pick up groceries if your other cars are in the shop. 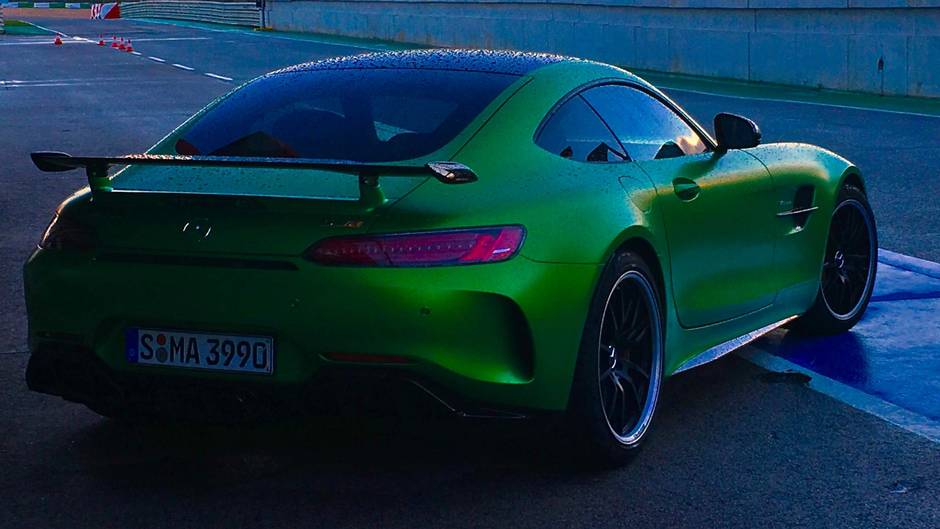 So fast, so well balanced, so audacious.