When a car design starts to feel creaky and weak in the knees, the auto maker has every incentive to rush a replacement into production. But that hardly applies to the Honda CR-V. Originally launched as a 2012, the fourth-generation design received a comprehensive refresh two years ago, and sales have been doing just fine. Last year it was the No. 3 best-selling SUV in Canada and sales are up 14.5 per cent this year through the first 11 months.

Still, Honda runs on a five-year model cycle, so here right on cue is the all-new fifth-generation CR-V. 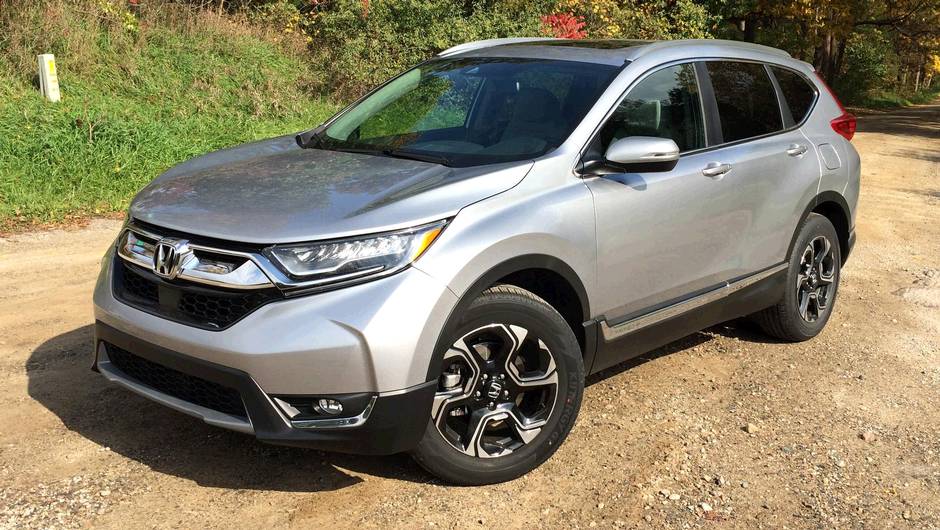 Not surprisingly, the starting point for the 2017 re-design was the compact architecture that we first saw on the 2016 redesign of the Civic. In the CR-V’s case, Honda modestly upsized the outside without straying from the industry-standard package size for a compact CUV – just under 4.6 metres long. The body is slightly wider and taller than before, but overall aerodynamic drag has been lowered by two per cent to what is claimed to be best-in-class levels (though, as always, Honda is coy about the actual numbers).

Within this barely-enlarged exterior, Honda scooped out significantly more interior volume than before – and the previous CR-V was already more than competitive. Cargo volumes of 1,110 litres behind the rear seat, 2,146 litres seats-folded, are tops in the segment. Somehow, though, the new CR-V seems to have mislaid the tall-in-the-saddle seating position that is supposed to be one of the appeals of crossovers.

Under the hood, last year’s 2.4-litre naturally aspirated four-cylinder engine is displaced by the 1.5-litre turbo that is the up-level option on the Civic. In this application it generates a robust 190 horsepower – more than the base outputs of most rivals, though still short of the high-output V-6 or turbo-four options available on some. The transmission is the CVT familiar from other Hondas, including the 2015-2016 CR-V. 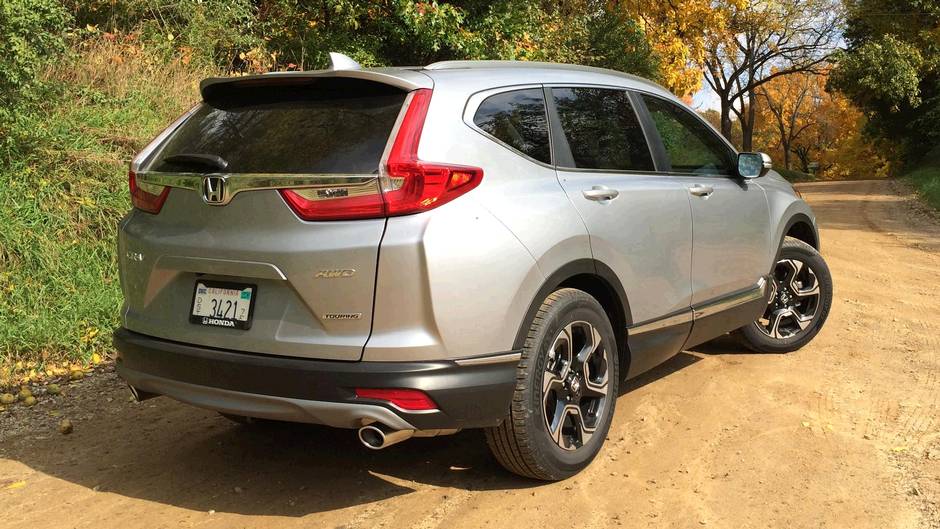 The all-wheel-drive system (not previously one of the industry’s better efforts) has been upgraded so that it can now divert up to 40 per cent of torque to the rear wheels when needed, a significant improvement from 25 per cent previously. The new suspension and steering have been tuned to restore the engaging dynamics that we used to take for granted in Hondas.

There are four trim grades in all – LX (FWD or AWD), plus AWD EX, EX-L and Touring. The list of standard or available features is extensive and includes most of the expected connectivity and driver-assist technologies of our modern age. Too bad one of the more notable standard amenities is remote start, a “convenience” that is as bad for the engine as it is for the environment.

You’ll have to avoid using the remote start if you want to benefit from fuel-economy potential that Honda expects to be top of its class (not counting hybrids).

Still, with its blend of leading roominess and fuel economy plus a full suite of contemporary technologies, this new CR-V not only presents a compelling alternative to other compact CUVs, it could also lure shoppers down from the next size class up. 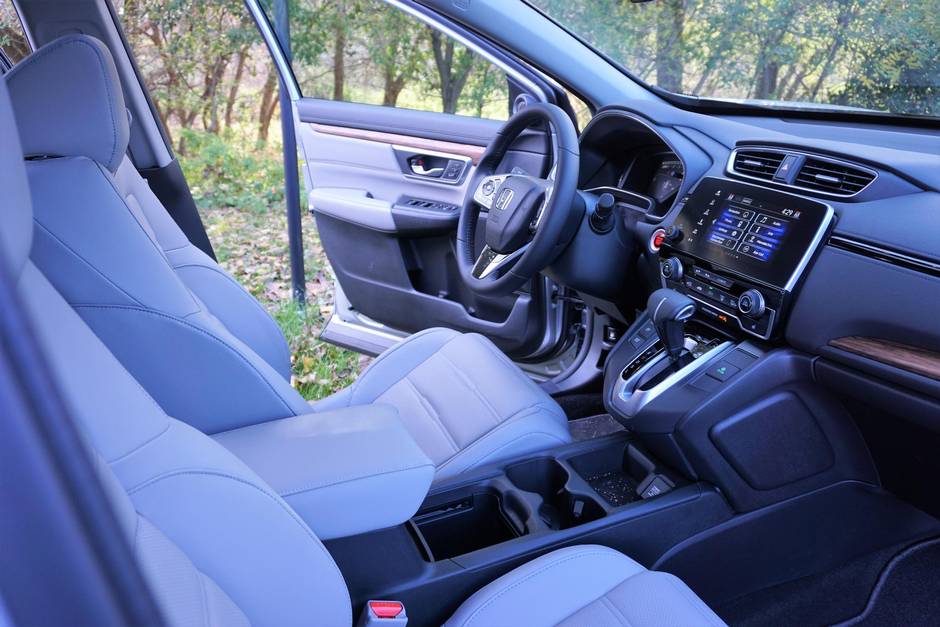 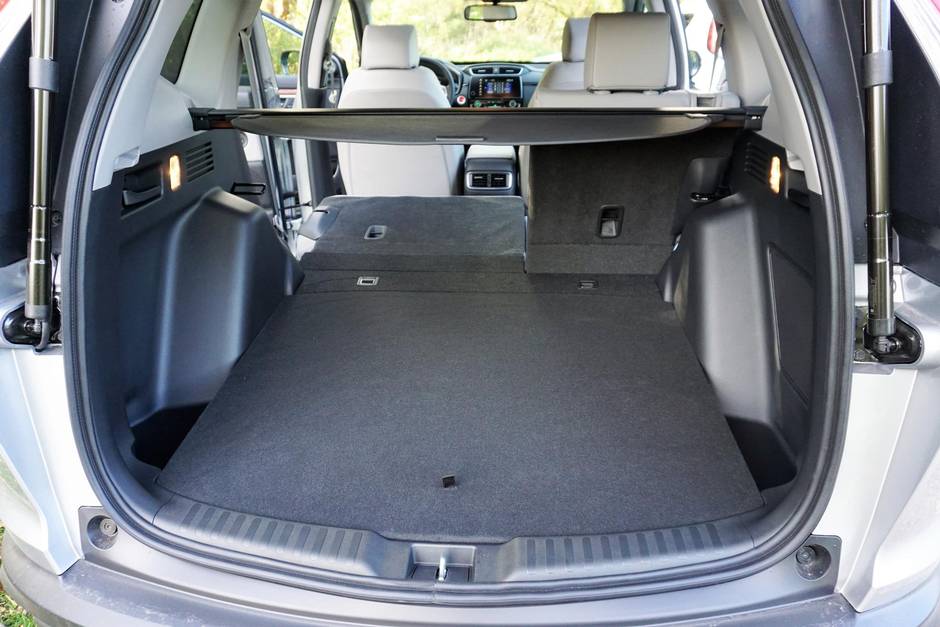 Looks: The body is 100-per cent new, yet still bears some family resemblance to its predecessor. Honda calls the new look sharper, and we won’t argue with that, though we’re not sure about that jutting-chin profile up front. Wheelbase and overall length are both longer.

Interior: The CR-V always was a paragon of packaging efficiency and the 2017 takes that to the next level. Best-in-class rear head- and leg-room provide ample stretch and sprawl space, and the back bench is comfy too (though, oddly, rear hip room is down significantly). Twelve-way power driver-seat adjustment on most trims is a bonus, but a tall-in-the-saddle posture was easier to find on the old model. The presentation of the 7-inch touchscreen strikes an unusual compromise between the free-standing and integrated schools of design, while we welcome the round knob for audio on/off/volume. But then Honda goes a bit weird on us with a gauge cluster devoid of round dials: the speedo is digital, the tacho a vaguely 50s-ish horizontal strip and the ancillary gauges are shaped like boomerangs. 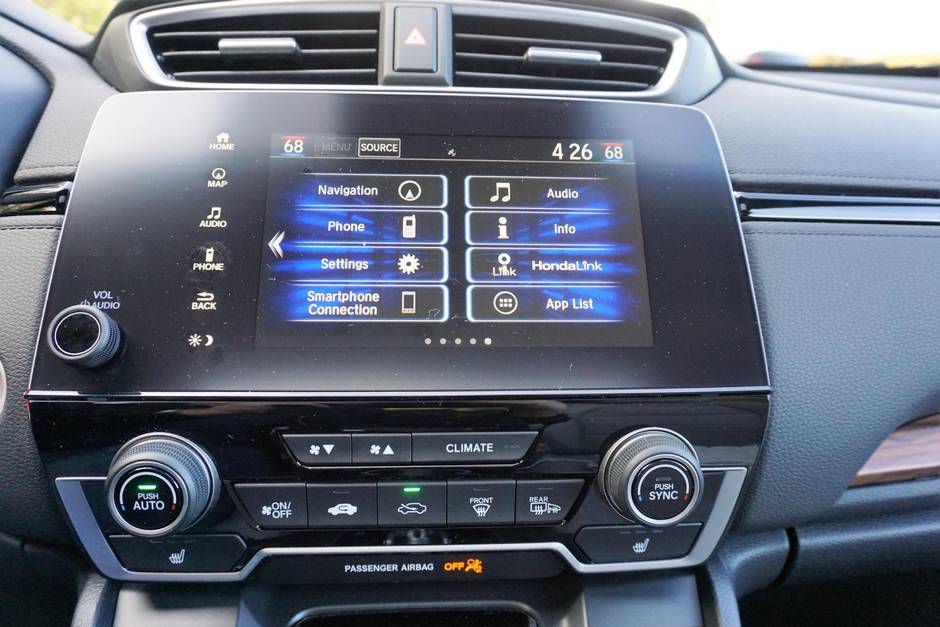 Performance: U.S. buyers get a carryover 2.4-litre base engine, but for Canada all CR-Vs use a 190-hp version of the 1.5-litre turbo introduced last year on the Civic. Teamed with a continuously variable transmission, it propels the CUV energetically, if somewhat raucously when leaned on hard. Driven more sedately, the CR-V is commendably quiet. As you’d expect from a chassis shared with Civic, the handling is lively and engaging, yet the ride is absorbent (though we did notice some lateral head-tossing motions on uneven country roads).

Technology: The important bases seem to be covered, featuring standard Android Auto, Apple CarPlay and Bluetooth, plus available HD Radio and SiriusXM. Dual-zone automatic climate control is standard, as are heated front seats and remote start (ugh!). A power liftgate is available. On the active safety front, Hondas Sensing (including adaptive cruise, automatic braking and lane keeping assist) is standard on all except the base FWD model.

Cargo: One-motion fold-down seatbacks lie almost perfectly flat, and are flush with the two-position cargo-area floor when the latter is in its upper position; in its lower position the floor maximises cargo room. The seats-folded cargo floor is also a whopping 25 cm longer than before. The front cabin is well served with oddments stowage space. 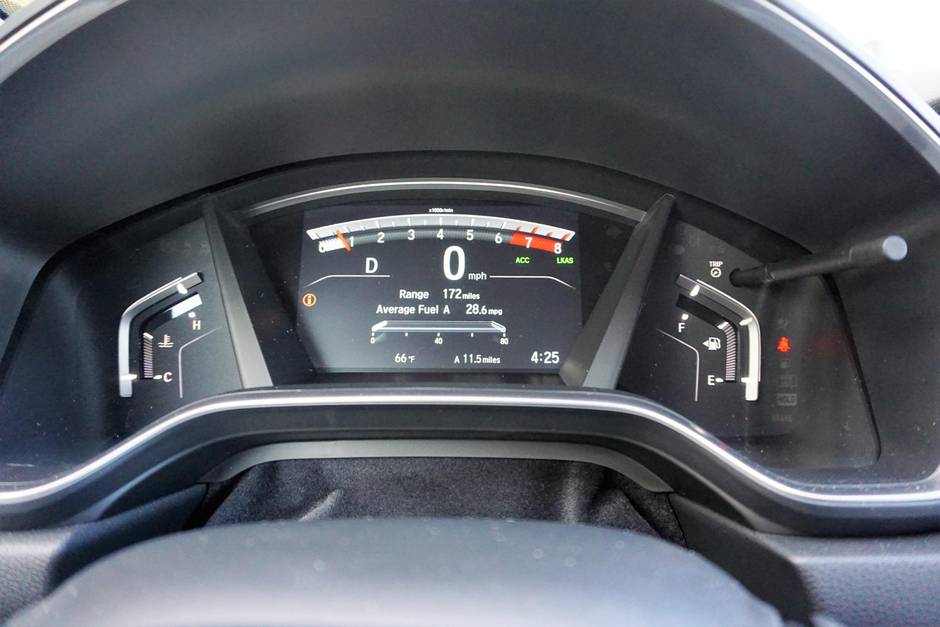 Already a contender, the CR-V gets a redesign that extends its left-brain virtues and adds new right-brain appeal. 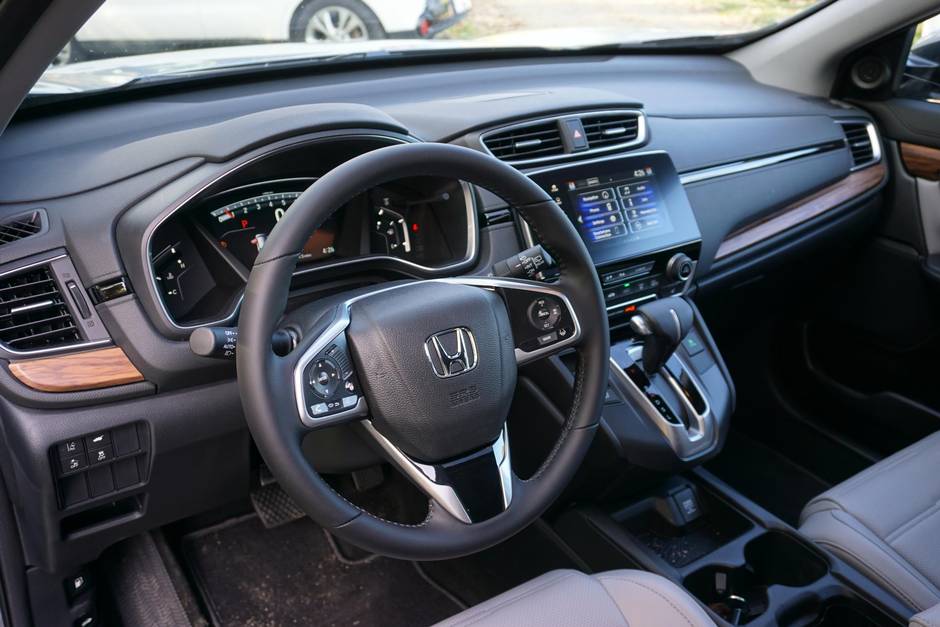