In 2005, General Motors replaced the ubiquitous but tired Chevrolet Cavalier/Pontiac Sunfire with a pair of attractively styled sedans in the form of the Chevrolet Cobalt and Pontiac Pursuit. Both of these models were built in Lordstown, Ohio, but the Pursuit was sold in Canada only.

Constructed on GM's global Delta architecture (also utilized in the Opel Astra in Europe), the Pursuit allowed Pontiac to stretch out a little more in terms of styling and performance tuning. It was also meant to complement the Pontiac G6, which was unveiled in the same year.

According to GM, it was all part of the company's "big swing at the plate" in the small-car market segment, and the Pursuit was designed to appeal to both penny-pinchers and the tuner crowd.

In 2005, there were three versions: base, SE and GT. The first two models were powered by GM's familiar 140-horsepower, 2.2-litre Ecotec four-cylinder, while the GT got a robust 170-hp upgrade and 200 cc more displacement. A Getrag five-speed manual gearbox was standard equipment with an available four-speed automatic. The higher performance engine in the GT had a variable valve timing feature for the first time in the history of this powerplant.

The GT also came with up-rated suspension, a wider choice of colour combinations, optional heated leather seats and an optional monster sound system that was loud enough to be used as a weapon. GM executives joked that you'd know when the GT version was coming because you'd be able to hear it from blocks away. It was also one of the first times in years that General Motors designed one of its entry-level models with younger buyers specifically in mind.

Although the suspension in the Pursuit was fairly orthodox - MacPherson struts up front and torsion beams in the back - it was the best-handling economy car GM had ever produced. Its predecessor - the Sunfire - was a competent but essentially uninspiring family hauler, but the Pursuit was actually fun to drive - especially the GT, which was downright tossable.

All versions came with electronic power steering and the base and SE received front disc/rear drum brakes, while the GT had four-wheel discs. ABS was available across the line and you could choose from three different wheel sizes.

Base price for the new Pursuit was $15,925, with another $5,000 for the SE version, which came with air conditioning, power windows, cruise control and ABS, among other things. As usual for GM, there was wide range of options and special equipment "groups."

I drove an early production version of the Pursuit back in '05 and, while I appreciated its handling and performance, I was appalled at its lack of build quality. During highway driving, there was so much wind noise, I actually pulled over to check that all four doors were closed properly. Pontiac did clean up its act in terms of fit and finish as production ramped up, and among other things, the Pursuit featured special laminated steel cabin construction, with plastic polymer sandwiched between layers of sheet metal around the firewall and inner dashboard area.

Just one - fairly trivial - safety recall to report from Transport Canada: It concerns possibly flawed headlight assemblies that could rattle loose. An easy repair, performed by the dealer. The U.S.-based national Highway Traffic safety Administration has this glitch on file, too, as well as an airbag warning concerning inadequate head protection in the event of a rollover. This last item is actually for the Chev Cobalt, but since the Pursuit is essentially the same car, it's logical to assume that it applies to it as well.

NHTSA has a hefty 103 technical service bulletins on file for a four-year-old Cobalt and these almost certainly apply to the Pursuit. Among the various glitches are warnings regarding an incorrect mileage display on the odometer, a slow-filling fuel tank, a hyperactive brake warning light and various engine cooling issues.

Kind of a mixed bag from Consumer Reports. While the magazine concedes that the Cobalt/Pursuit is a step up from the old Cavalier/Sunfire, it doesn't like its crude nature and mediocre fuel economy.

It gets an "average" used-car rating, with red flags in the electrical system and suspension. There is also a black mark in the area of "squeaks and rattles." Again, these ratings are for the Cobalt, as the Pursuit has never been sold south of the border and the old Sunfire was discontinued after 2005.

With the exception of powertrain quality, a four-year-old Cobalt/Pursuit gets average or below-average marks from market research company J.D. Power in virtually every category. It doesn't seem to care for this vehicle at all.

Expect to pay less than half of what an '05 Pursuit cost new. Depending upon trim level and options, prices seem to range from about $6,000 to $9,000, but hard bargaining could probably get you one for less - there doesn't seem to be a huge demand for this variety or vintage of Pontiac. 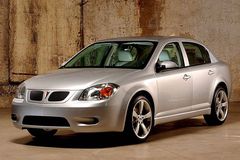 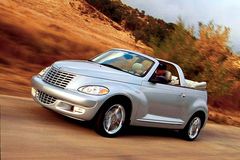 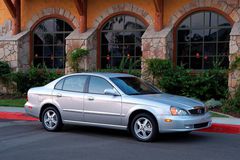 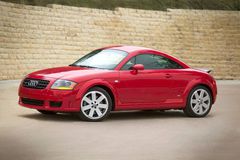 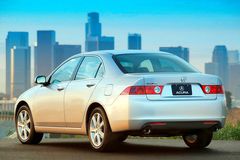 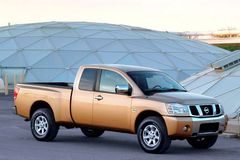 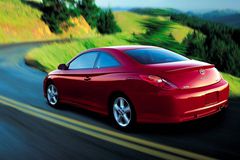 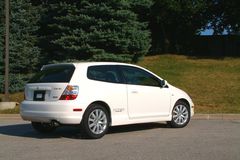