Investors seeking to profit from a recovery in oil and gas prices might need plenty of patience, but owning dividend-paying energy stocks in the meantime can make the wait easier.

Oil prices have been volatile recently amid uncertainty about a production cut by the Organization of Petroleum Exporting Countries when it meets Nov. 30. Crude plunged to around $27 (U.S.) a barrel in New York last February but has rebounded to nearly $50 recently. And natural gas prices have been under pressure because of a glut in supply and concerns about a warmer winter.

We asked three portfolio managers for two picks each among energy-dividend payers.

Calgary-based PrairieSky is a more defensive way to play an energy-price rebound because the company earns royalty revenue from oil and gas companies drilling on its lands, says Mr. Tahmazian, who oversees the Canoe Energy Income fund. "The producer spends all of the money to drill and takes the risk," he says. Commodity prices, however, do affect PrairieSky, which was spun off from Encana Corp. in 2014. When prices climb, PrairieSky earns a higher royalty off a company's production. "If prices fall, it is going to get less from the producer," he said. PrairieSky reduced its dividend this year amid the downturn, but the risk of a further cut is low because it uses 75 per cent of its cash flow to cover its monthly payout, he said, and "has resiliency if commodity prices come down." The royalty company, which has no debt and $170-million in cash, has extremely low overhead so it can distribute more of its monies.

Shares of this Calgary-based midstream oil and gas operator are attractive for income-seeking investors because it has a solid track record of increasing its dividend, says Mr. Tahmazian. Keyera is a fee-for-service business involved in natural gas gathering (via pipelines), processing, fractionation, storage, marketing and transportation. "It has exceptional vertical integration," he noted. "We think that is an advantage versus other midstream companies." Keyera, which has a strong balance sheet, has a 60-per-cent payout ratio, so its monthly dividend is sustainable, he said. The rest of its cash is being invested in "significant growth projects," he added. Because the company receives a stream of fees from energy producers, it is deemed by the market to be more of a fixed-income stock, so it is more vulnerable to potentially rising U.S. interest rates than to commodity prices, he said.

With the help of a "pristine balance sheet," this Calgary-based integrated oil company has been making acquisitions during the downturn to pave the way for future growth, says Mr. MacDonald, who oversees the Trimark Energy fund. Suncor raised its stake in Alberta's Syncrude oil sands joint-venture project to nearly 54 per cent after acquiring Canadian Oil Sands Ltd. as well as Murphy Oil Corp.'s 5-per-cent stake. Suncor can now apply pressure to ensure the Syncrude plant operates more efficiently, he said. In addition to cutting costs, Suncor has been divesting assets, including its lubricants business. Assuming oil prices rise to $55 a barrel next year, Suncor could generate free cash flow of more than $2-billion (Canadian) after paying dividends, he suggested. Shares of Suncor, whose intention is to shift more capital to dividends and share buybacks in the future, trades reasonably at around eight times 2017 cash flow, he said.

Shares of this Houston-based oil and gas exploration and production company are compelling, but the market seems to underestimate how much undeveloped resources Occidental has in Texas's Permian Basin and globally, Mr. MacDonald says. The company spent $2-billion recently to acquire more acreage in Texas and increased its capital budget for next year in anticipation of higher oil prices, he added. In the Middle East, its interests include a 40-per-cent stake in the Al Hosn gas project in the United Arab Emirates. Occidental also owns a chemical business, which provides some diversification and would be worth a "lot of money if it was ever split off," he added. The company, which has a strong balance sheet and has raised its dividend for 14 consecutive years, trades at about 10 times 2017 cash flow, he said. "Its shares have a lot more upside to rising oil prices than people give them credit for."

This Calgary-based light oil producer is an attractive energy play because of strong management, a solid balance sheet and the ability to make "smart acquisitions at the bottom of the cycle," says Mr. Granger, who co-manages the Sentry Energy fund. Whitecap's chief executive officer, Grant Fagerheim, has a history of starting and selling energy companies. Whitecap is focused on keeping its oilfield production-decline rates low, which means it has more cash for dividends. Its dividend was cut twice this year, but it was "prudence in managing the balance sheet," Mr. Granger said. This year, Whitecap struck a $595-million deal to acquire the oil-producing assets in Saskatchewan from Husky Energy Inc. Whitecap is unlikely to cut its dividend again because the price of oil seems to have bottomed in February, he said. "The stock could easily be back at $13 to $14 a share in a year's time."

Shares of this Calgary-based oil and gas producer offer upside potential because it has a strong management team focused on earning the best rate of return on its assets, says Mr. Granger. ARC has been selling oil properties to focus on "highly profitable" projects in British Columbia's Montney shale gas play, he said. Last week, it sold its Saskatchewan oil assets to Spartan Energy Corp. for $700-million. ARC, which pays a monthly dividend, has also announced a $665-million capital program for 2017. These moves, plus a possible elimination of its dividend reinvestment plan, which is dilutive for shareholders, should provide a "tailwind for its share price," he added. The company reduced its monthly dividend this year, but no more cuts are expected, he said. The stock could climb to the $25-to-$27 range over the next year, he suggested. "It's been a stellar performer year-to-date." 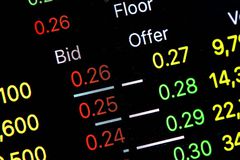 Adviser-fee options for floundering millennial investors
November 23, 2016
Anticipating a market rout? Five ways to protect yourself
November 17, 2016
Solid stocks and ETFs for your retirement portfolio
November 10, 2016
Want to buy Amazon and eBay? Do your stock shopping carefully
November 2, 2016
When to push the sell button on a stock
October 19, 2016
Parents of disabled children face daunting financial preparation
October 13, 2016
Follow us on Twitter @globebusiness Opens in a new window
Report an error Editorial code of conduct