Pent-up demand for vehicles is finally arriving at dealers' lots, propelling U.S. vehicle sales to their best quarter since before the recession and Canadian deliveries to their strongest March in more than two decades.

U.S. sales hit about 14.5 million last month on a seasonally adjusted annual rate basis, providing another strong signal that what was once a tepid auto recovery is getting hotter. Canadians bought more than 157,000 new cars and trucks, the strongest March since at least 1989 if not ever, according to available figures. Sales records toppled for several auto makers in the Canadian market.

The auto sales numbers combined with other recent economic data suggest the economy is slowly but surely bouncing back from the recession and are a positive sign for battered manufacturers in Ontario. The health of the sector greatly depends on a strong U.S. economy and a steady procession of vehicles rolling out of assembly plants.

"There's no question the first quarter over all was quite solid," said Douglas Porter, BMO Nesbitt Burns Inc.'s deputy chief economist, noting an annual sales rate of 14.5 million is considerably higher than the 12.8 million U.S. sales level of last year. "There's a need – at least among some consumers – to replace their car, but I think a lot of it is just being led by a quiet, persistent recovery in the broader economy."

Fuel prices represent one factor that makes this auto recovery starkly different from previous comebacks. In the past, gas prices near record levels in both Canada and the United States would have choked off sales. This time, however, they appear to be pushing some U.S. drivers in particular to trade in vehicles that are on average 11 years old for up-to-date models that are as much as 30 per cent more fuel efficient.

On both sides of the border, there was plenty of evidence that buyers were reacting to gas prices that are near record high levels.

Customers of Chrysler Group LLC, which posted a 34 per cent increase in U.S. sales and held on to the sales lead in Canada, purchased more than 14,000 mid-sized Chrysler 200 sedans, surpassing such traditional stalwarts as the company's minivans and Grand Cherokee sport utility vehicle, which also rose.

Toyota Canada Inc. said sales of the hybrid version of its mid-sized Camry soared 194 per cent.

Sales of the compact Focus rose by double digits in both markets.

"Fuel economy was the name of the game in March, as it had been in the first quarter," Ken Czubay vice-president of U.S. marketing for Ford Motor Co., said on a conference call with analysts and reporters. "All customers, regardless of segment, are telling us they want fuel economy and performance."

Don Johnson, vice-president of U.S. sales for General Motors Co., said the percentage of Americans buying GM vehicles with four-cylinder engines – the most fuel efficient the company offers – hit a record high of 42 per cent in March.

"There is definitely a general trend toward more fuel-efficient and sometimes smaller vehicles, but it is not what I would call a panic reaction to it," Mr. Johnson told reporters and analysts.

In Canada, sales of the subcompact Chevrolet Sonic outperformed its predecessor, the Chevrolet Aveo, but General Motors of Canada Ltd. posted a 7 per cent decline, in an overall market that rose 3 per cent. 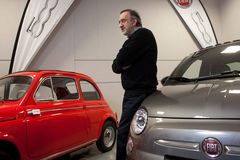