Two powerhouses in the Canadian online world will end their five-year marriage next week and begin competing with each other for the same advertising dollars.

Microsoft Corp. and BCE Inc.'s Bell Canada will close their Web portal, sympatico.MSN.ca, on Tuesday and refresh their own sites: MSN.ca and sympatico.ca.

Both companies said the split will give them greater flexibility to pursue their own online strategies. The formula for making money online is now driven by advertising, they noted, making it vastly different than it was in 2004.

"Six or seven years ago, Microsoft's view was that the way to monetize the Internet was through subscription services, and we felt we needed partnerships with phone companies around the world to distribute them," said Owen Sagness, vice-president of Microsoft Canada Co.'s consumer and online group. "As it turned out, by the time we implemented, the online advertising world was showing signs of life."

The Web deal, announced in 2003, brought together the two top portals in Canada. It was one of the first such deals that Microsoft ended up signing with a telecom player. Mr. Sagness said the joint portal soon became "misaligned" with the software giant's strategy, as the company gave up on subscription services and dove into advertising.

"This turned out to be a good deal for Bell," he said. "Microsoft was driving the majority of advertising impressions and Bell was keeping most of the revenue." Neither company would say what amount of revenue the portal drives, but both said it is profitable.

Kevin Crull, president of residential services at Bell, said the phone company went into the relationship with the idea it could use Microsoft's software to add services to the Sympatico portal for which users would pay. "We wanted their development capabilities. They wanted our audience," he said. "It was a very different world."

Bell and Microsoft have signed a new, three-year arrangement that will see the two sharing Web traffic and some services. Microsoft, for example, will let Bell sell some of the ads on its Hotmail and Messenger services. And Bell has agreed to make Microsoft's new search engine, Bing, the exclusive search tool on Sympatico.

The arrangement will allow Bell the ability to focus on serving content and signing up advertisers for what the company terms its "three-screen strategy." Essentially, Bell will look for ways to tie together opportunities among its Internet, television and mobile phone platforms.

"This is an evolution of our partnership," Mr. Crull said.

Sympatico will still operate on a lot of Microsoft technology, but Bell will add four of its own new content channels to its independent site: autos, health, movies and finance. Most of the material will be aggregated from top content providers, Mr. Crull said.

Microsoft said going it alone will allow the company to add global content it has already licensed for use on other MSN sites around the world. For example, MSN.ca will have a BBC feed on the site. A deal to use the BBC content just for Canada is too expensive for the size of the market place here, but by adding the service on to an existing global contract, the terms become economically viable, Mr. Sagness said.

"We are going to step up our game in the Canadian market and bring [the MSN portal]up to the level we have had in the rest of the world."

An independent MSN.ca will also tap more of Microsoft's Web technology to improve users' experience, such as adding the ability to handle multiple live feeds on the site, he said. "We can do things a Canadian organization might not be able to do on its own at a reasonable price point."

Microsoft said it has added about 60 advertising and editorial staff to prepare for the launch of the new MSN.ca. Bell says it has kept its Sympatico head count stable. Both companies will compete with the joint portal run by their rivals Rogers Communications Inc. and Yahoo Inc.

RIM expected to improve web browsing with acquisition
May 1, 2018 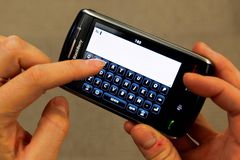 In wireless war, Bell's arsenal gets a boost
April 28, 2018
Follow us on Twitter @globeinvestor Opens in a new window
Report an error