Bombardier Inc. is taking a step toward a full-blown battle with airplane giants Airbus SAS and Boeing Co., introducing a version of its new C Series plane that increases the number of seats to 160.

The announcement was made at a Bombardier factory in Mirabel, Que., Thursday as the Montreal-based transportation giant unveiled the first completed aircraft in its decade-long effort to enter the market for large commercial planes.

The C Series will make its first flight by the end of June, Bombardier officials told customers and suppliers gathered at a hangar for the first glimpse of the new plane. The June deadline is six months later than the originally scheduled date of the end of 2012 for the first flight.

The move to a maximum of 160 seats from 145 pushes the company closer to the heart of the narrow-bodied segment of the market, now dominated by a bitter dogfight between the Airbus A320 and the Boeing 737. It also raises the stakes for the $3.4-billion project, adding an ambitious new thrust for one of the aerospace sector's biggest programs.

The C Series is Bombardier's bid to expand beyond its two major plane categories: business jets and regional jets.

Airbus and Boeing have already responded to the threat of the C Series seats by offering new, more fuel-efficient engines on the A320Neo and 737MAX versions of their planes, both of which are scheduled to arrive later this decade.

But the step up to 160 seats and a potential move later to stretch the C Series to offer as many as 180 seats means Bombardier could cut into a hugely profitable segment for Airbus and Boeing, whose thousands of orders help finance development of larger planes.

A plane offering 160 seats is "right in the sweet spot of the 320Neo and the 737MAX," said industry analyst Addison Schonland, who watched the curtain rise to reveal the new plane. The 737-800, for example, offers 162 seats.

"What they did today was fire a shot across the bow of the bigger guys," said Mr. Schonland, a partner in consulting firm AirInsight.

In fact, one customer, airBaltic, said it will change some its orders to the new version.

The new version of the plane – which is longer by about two feet and is required to offer an additional emergency door over each centre wing – is aimed at low-cost airlines. Many are growing rapidly, especially in emerging markets.

The question is the extent to which Airbus and Boeing will step up the discounts they have been offering airlines buying A320 and 737 planes in order to blunt the impact of the C Series.

Analysts have said Bombardier needs to offer similar discounts, buyback rights, subsidized lease terms or other deals to encourage customers to sign up to buy a plane that hasn't yet flown. If C Series gains momentum because of the 160-seat version, the two giants will respond, Mr. Schonland said.

Mike Arcamone, president of Bombardier Commercial Aircraft, said the 160-seat variation is simply an option and the company's focus remains on delivering the smaller CS100 version to customers by the middle of 2014 and the larger CS300 by the end of 2014.

There are no current plans to offer a larger version, Mr. Arcamone said.

The new C Series is "not a paper airplane, it's a real airplane," he said. "It is not a re-engined aircraft we're putting in the market."

After unveiling the completed plane, Bombardier officials showed off three other aircraft among the five that will be part of the flight test program, all in various states of completion.

Those totals are lower than they should be at this stage of the plane's development, said a European airline industry source who insisted on anonymity.

"Part of the problem is not Bombardier's fault per se, in that the [Boeing] 787 debacle and the A380 problems have made airlines wary of ordering untried aircraft when they don't have to," the source said. Both those wide-aisle planes were delivered years later than originally scheduled and the 787 is grounded at the moment because of fires in the lithium ion batteries of some planes. 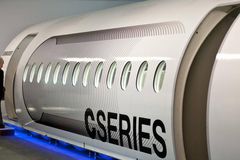 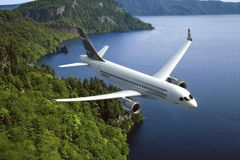 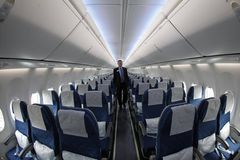 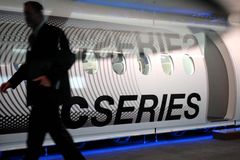