The complete story hasn't been written on old-fashioned books.

Amid pressures to make up for book sales being lost to the digital world, Heather Reisman says a surprising proportion of surveyed customers are reading both digital and physical books, rather than just making the complete switch.

The dual-reading consumers augur well for the future of her business, Indigo Books & Music Inc., as it gets squeezed by the inexorable shift to e-reading.

As a result of that shift, Ms. Reisman, Indigo's chief executive officer, has spearheaded a massive transformation of Indigo as predominantly a bookseller into what she calls a cultural department store – turning to a wider array of products for children, babies and the home.

Her reinvention notwithstanding, "the book business is still a thriving business," she said at Indigo's annual meeting on Wednesday. "What strikes us most significantly is the percentage of people whom we talk to and survey, who say they are reading both ways."

The silver lining is a saving grace in a book-selling landscape that can't hide from the harsh reality: About 18 per cent of readers already have moved to e-books from physical books, according to Indigo data. Industry projections suggest that within five years, as much as 50 per cent of books will be read digitally.

And while the projections will continue to strain Indigo's bottom line, Ms. Reisman can find some comfort in the number of consumers who remain loyal to traditional books, even as they read some material on a Kobo or iPad as well.

"Some people thought that everybody would be reading digitally," said Robert Gibson, head of research at Octagon Capital. "I don't think that that has happened, or is going to happen."

The shifts have caused significant pain to Indigo, which now is investing in its burgeoning non-book business. Indigo's EBITDA (earnings before interest, tax, depreciation and and amortization) margin tumbled to 2.8 per cent in fiscal 2012 from 8 per cent in fiscal 2008, before e-readers became a bigger force.

"The transformation we are embarked upon is a demanding multiyear effort," Ms. Reisman said in her recent annual report. "It will certainly take a few years before our operating financial results … return to pre-e-book levels and are poised for major new growth."

Under her transformation, Ms. Reisman is stocking up on toys, gifts, stationery and home goods to help offset the decline in Indigo's book sales. She said on Wednesday that each of the non-book businesses is growing "very nicely."

Along with its e-book challenge, the retailer also battles U.S.-based discount giants Wal-Mart, Costco and online specialist Amazon.com, which offer heavy markdowns on books. By next March, Indigo will feel further strains when U.S. cheap-chic purveyor Target Corp. starts to open its first stores in Canada.

The federal government is reviewing Target's move here to determine whether its bookshelves and cultural products will carry enough homegrown content.

In 2010, Ottawa weighed Amazon.com's proposal to set up its own warehouse here. It gave the online retailer its nod, with the condition that Amazon.com invest more than $20-million, including $1.5-million for cultural events and awards and for promoting Canadian-authored books abroad.

Indigo is looking for a boost. Its fourth-quarter results swung to a profit because of the sale of its Kobo e-reader business. However, excluding one-time items such as the Kobo gain, its loss widened to $15.3-million from $13.7-million a year earlier. Revenue slipped to $196-million from $200-million. 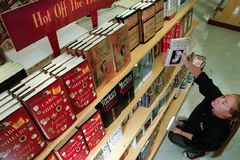 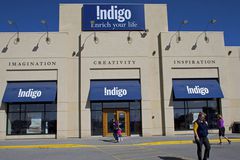