After more than three years of selling milk and frozen pizzas alongside power drills and patio sets, Canadian Tire Corp. is retreating from its experiment with food.

In the latest and most significant signal yet that it is putting the brakes on expanding into groceries, the retailer has decided against placing pilot food sections in its new prototype stores. Instead, the company is dedicating its focus to pumping up its signature tires and other auto-related products.

The chain's failure to embrace food more widely underlines the challenges of non-grocers in stepping into the category. And it reflects the pressure on retailers today to bet on their core strengths at a time when U.S. discount titan Target Corp. is gearing up to invade Canada in early 2013.

While food tends to draw shoppers more frequently to stores, its gross margins can be half those of general merchandise. And running food sections can be labour intensive and result in spoiled products that ultimately have to be tossed, pinching profits further. Savvy discount grocers, such as No Frills, provide stiff competition. Even Wal-Mart Canada Corp. struggled to get its food strategy right when it introduced it in a bigger way here in 2006.

Canadian Tire's 2008 foray into food was part of its bid to find new ways to rev up customer traffic. Rivals ranging from Shoppers Drug Mart Corp. to Wal-Mart rapidly added eggs and cheese to their aisles. By next year, Target will arrive here with its own food offerings. The appeal is evident: Customers who buy food shell out three times more over all than those who don't, according to Shoppers' findings.

But stocking food requires Canadian Tire to set up a costly distribution network and refrigeration for perishable goods, which need to be replenished more frequently than lawnmowers or toasters. What is more, food can take the retailer's eye off its key initiatives in the battle to fend off Target and other foreign threats.

Even chief executive officer Stephen Wetmore has played down the food strategy. "Obviously, we still have to make a decision on food," he told analysts in November. "Economics versus traffic-driving on a national scale is the issue. So we are continuing to look at all the options, and we'll obviously keep you posted."

Mr. Wetmore may shed more light on his food test on Thursday when Canadian Tire releases its fourth-quarter results, which are expected to be crimped by fewer sales of winter-related merchandise after a mild season. Company officials declined to comment before the results were issued.

Having moved into the corner office in 2009 after the food initiative was rolled out, Mr. Wetmore has since mapped out a clear plan: He's returning the retailer to its roots in tires and auto products while ramping up housewares and sporting goods following last summer's acquisition of Forzani Group, the largest retailer in that field, which includes Sport Chek.

With food (beyond snacks and soft drinks) in 17 of its 487 stores, Canadian Tire hasn't added it to outlets since 2010. Early that year, Mike Arnett, one of its executives, said that food was "the most-shopped category" in stores where it was carried, generating a positive customer response.

Still, Canadian Tire's four new prototype stores have no food offerings. "This could be a signal that the [food]experiment is over," said Mark Petrie, an analyst at CIBC World Markets.

The prototype in Bowmanville, Ont., for example, tries to lure more customers with new aisles of party supplies, greeting cards and mobile phones along with a stepped-up offering of items for pets. "Keeping this simple with a low-service [model]with strong margins is Canadian Tire's bread and butter," Mr. Petrie said. The store also has bolstered its aisles of kitchen goods, which will be a key retail battleground in 2013 because of Target's strength in the area, he predicted.

For the store to succeed with food, it would have to cater more to women who still do most of the grocery shopping and tend to head to Wal-Mart or Shoppers over Canadian Tire, Ms. Chan said.

When Wal-Mart Canada beefed up its food offerings in 2006, it grappled with an array of issues, including having to improve its supply chain, said David Marcotte at consultancy Kantar Retail.

It faced gross margins in groceries that can range between 20 and 24 per cent, compared with twice that level for general merchandise, he said. But food margins often shrink to between 3 and 6 per cent after accounting for the cost of labour and damaged and stolen goods, he said. "Simple economies of scale and the labour pool take time to build to profitable processes."

David Cheesewright, former CEO at Wal-Mart Canada who now heads other regions as well, has acknowledged the tough retail food terrain in this country. "Our ability to get food margins as high as the U.S. is challenged," he told a conference last June.

Canadian retailers have a Target on their backs
December 26, 2011
Canadian Tire gets back to its roots
October 19, 2011 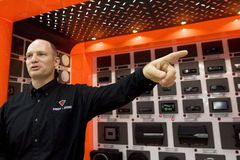