The relentless push by global corporations to slash costs has eliminated the jobs of about 450 people in London, Ont., who had been locked out of their Caterpillar Inc. workplace since Jan. 1 in a high-profile and bitter dispute.

The Caterpillar move is the latest in a series of plant closing or lockout actions taken by foreign companies against employees in Canada amid globalization, a fragile recovery from the recession, the rising value of the Canadian dollar and a perception that workers are in a weak position.

The closing infuriated Mr. Lewenza, whose union represents the plant's workers. Caterpillar had demanded pay cuts of 50 per cent in many job categories, elimination of a defined-benefit pension plan, reductions in dental and other benefits and the end of a cost-of-living adjustment.

"I've never had a situation where I've dealt with such an unethical, immoral, disrespectful, highly profitable company like Caterpillar," Mr. Lewenza said in a telephone interview Friday as he drove to London from Toronto to meet with the workers.

He said that during bargaining in December, he told the company's negotiators: "If it's in your business plan to close us, don't punish us, let's work out a closure agreement. They said: 'We have no intention of closing the facility.' "

Caterpillar officials would not respond to the CAW leader's comments.

Spokesman Rusty Dunn said much the reasoning for the company's decision is summed up in one of the four paragraphs in the Progress Rail news release announcing the closing.

"The cost structure of the operation was not sustainable and efforts to negotiate a new, competitive collective agreement were not successful," the statement said.

"This is something that EMC-Progress Rail has been saying quite consistently," Mr. Dunn added in an e-mail from Caterpillar's headquarters in Peoria, Ill. "All facilities within EMC [Electro Motive Diesel]Progress Rail Services must achieve competitive costs, quality and operating flexibility to remain viable in the global marketplace. Expectations at the London plant were no different."

The company said the work is moving to other operations in North and South America.

Union officials and other observers expect a new Progress Rail plant in Muncie, Ind., to be the beneficiary. The closing was announced 36 hours after Indiana Governor Mitch Daniels signed so-called right-to-work legislation, which makes it more difficult for unions to organize.

"It's possible that's a coincidence," but doubtful, said Mike Moffat, a professor at University of Western Ontario in London who has followed the lockout closely.

Eight days ago, Caterpillar reported record annual profit of $4.9-billion (U.S.), an 83-per-cent increase from $2.7-billion in 2010. That came from record sales of $60.1-billion for one of the signature companies of Corporate America.

Those kinds of increases had not been seen since the post-Second World War boom days of Harry Truman's presidency from 1945 to 1952, Caterpillar's investor relations director Mike DeWalt told investors on a conference call last week.

Caterpillar is the third U.S.-based manufacturing powerhouse in six months to close a Canadian factory and cut some of the best-paying jobs in southwestern Ontario. In August, heavy truck manufacturer Navistar International Inc. announced the official closing of a factory in Chatham, Ont., that had ceased production in July, 2010. In September, Ford Motor Co. closed its St. Thomas Assembly Plant in Talbotville, Ont., just south of London.

Meanwhile, Rio Tinto Alcan locked out about 750 workers at a smelter in Saguenay-Lac-Saint-Jean, Que., on Dec. 31 after their contract expired. A United States Steel Corp. lockout of workers in Hamilton ended last fall after workers agreed to concessions on pensions.

Caterpillar has been relentless in facing down unions, notably the United Auto Workers, with which it fought a series of epic battles in the 1990s that included a 17-month strike.

"Since then, they've been taking hard lines in terms of their negotiations with the United Auto Workers and apparently the Canadian Auto Workers," Prof. Devinatz said.

Caterpillar, a manufacturer of earth movers, mining equipment and other machinery, purchased Progress Rail in 2010 from a hedge fund that had bought the diesel locomotive division of General Motors Corp. in 2007. GM opened the London plant in 1951.

The factory served as a site for Prime Minister Stephen Harper to tout the advantages of corporate tax breaks in the 2008 federal budget, including doubling the capital cost allowance deduction for locomotive purchases.

Several months after that budget, Canadian National Railway Co. announced an order for the purchase of 40 locomotives from the London plant. Mr. Harper climbed into the cab of a locomotive and waved to assembled workers.

Bracing for trouble on the picket line
January 7, 2012 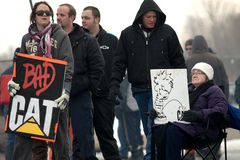 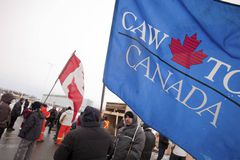 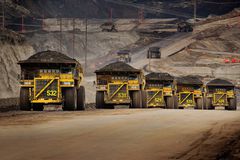