Caterpillar Inc., the maker of heavy equipment sold around the globe, missed earnings expectations this week and sharply reduced its 2013 guidance. So why are the shares up – by roughly 5 per cent – since the news?

It may be that many investors believed the pre-earnings share price reflected maximum pessimism, and the worst is behind it. Not all have bought into that theory, however, meaning Caterpillar shares are closer to their 52-week low than their high. And that represents a buying opportunity for believers in one of the world's great global brands.

Now, this may sound familiar. If so, you recall that this column recommended Caterpillar in July, 2012, for investors more optimistic about the global economy than the consensus, or those with a longer-term view. Buying then, and selling in February, when the shares nearly touched $100 (U.S.), yielded a 20-per-cent gain. Investors who kept holding on are back to the $82 level of July, 2012, unfortunately.

It's easy to understand the retreat. The shares took their last few steps toward a 52-week low in mid-April, when the news hit that Chinese GDP grew a mere 7.7 per cent, versus expectations of 8.0 per cent. (The Chinese growth story has been key to Caterpillar's fortunes.)

Then, in this week's earnings release, Caterpillar acknowledged what everybody else knew: Its mining equipment business, which accounted for a third of sales and half of profit in 2012, was slumping. The guidance cut – in which Caterpillar reduced its profit forecast from a range of $7 to $9 per share to "about $7" – was largely due to a new outlook of a 50-per-cent drop in mining equipment sales this year.

"While there can never be assurances that mining has 'bottomed,' we believe this outlook is undoubtedly (and uncharacteristically) more realistic given current commodity prices and global economic growth," says analyst Theoni Pilarinos of Raymond James Ltd. (She has an "outperform" rating and $100 target price, down from $105 prior to the earnings.)

Ms. Pilarinos's reference to "uncharacteristically more realistic" reflects a widespread belief that Caterpillar's management has been more optimistic about global growth than circumstances warrant. Caterpillar CEO Doug Oberhelman told cable channel CNBC he believed "we're close to the floor in mining." It's fair to take issue with that.

However, analyst Joel Tiss of BMO Nesbitt Burns Inc.'s U.S. affiliate says "consensus thinking seemingly suggests that virtually all of Caterpillar's business is related to the mining industry … we would remind investors that Caterpillar makes products and whichever end markets are strongest, tend to become a larger part of Cat's overall business mix."

Mr. Tiss, who has an "outperform" rating and $96 target price (down this week from $111), notes construction equipment made up 60 per cent of the sales mix in 2006, during a global housing boom; that figure is 25 per cent today. "Investors are not giving enough credit to the diversity and balance inside Caterpillar's global business mix," he says.

But what will be the next driver of growth? While demand for equipment for the construction, rail and energy industries is growing slowly, it's hard to see what will compensate, this year, for what analyst Brian Langenberg of Langenberg & Co. says will be "three more hideous [earnings] comparisons" between the remaining quarterly reports in 2013 and their corresponding periods in 2012.

Thus, it's unclear what the all-important catalysts that analysts look to for short-term stock gains might be. That makes Caterpillar, as we suggested last July, a buy for those who are optimistic in the short term or who can wait for the long term.

Most of the company's earnings multiples are just a tick or two above mid-2012 levels. Its trailing price-to-earnings ratio, according to Standard & Poor's Capital IQ, is about 11.3, versus around 10.7 at the end of June, 2012 – which was, it's fair to say, a time of greater global economic uncertainty. Caterpillar is trading below construction peers, despite a 2.6-per-cent dividend yield and the recent addition of $1-billion to its share-buyback program.

BMO's Mr. Tiss says at the next cyclical peak, Caterpillar could earn $12 per share (the company's long-term goal is $15, he notes) and a peak P/E multiple of 12 pushes the shares to $150 or above.

Or, put another way, if the shares can gain 5 per cent on bad news, imagine the return that awaits when Caterpillar, and the global economy, fires on all cylinders? 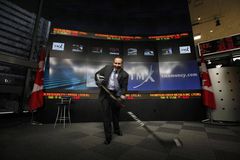 Manitoba Telecom may gush cash, but watch that pension deficit
May 11, 2018 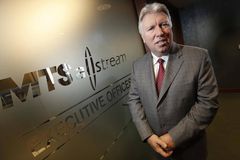