Sophisticated algorithmic trading systems have become the bane of an equity day trader's life, reacting faster to news than any human can and spotting price irregularities across thousands of stocks at once.

Nearly 40 per cent of all share orders in Europe are sent by algorithmic trading computers, up from just 20 per cent five years ago, according to the Tabb Group, a capital markets consultancy. In the U.S. the figure is 37 per cent.

Yet despite the prevalence of these supposedly smart machines, some traders are making a tidy profit getting the better of these systems, which can make costly mistakes if they are not set up correctly or if their trading patterns can be understood.

Svend Egil Larsen, a Norwegian day trader, worked out in 2007 how the computer algorithm of Timber Hill, a unit of US-based Interactive Brokers, would respond to trades in certain illiquid stocks. The stocks would change price in a uniform way regardless of how much was bid.

He found that he could bump up the price with very small trades and then sell with much larger trades for a profit. He was not the only trader who worked out this flaw, which he called "painfully obvious". But he still made $50,000 (U.S.) in a few months.

Charges of market manipulation were brought against him and another trader, Peder Veiby, in a high-profile court case where the public came to look on the duo as heroic Robin Hood figures, beating financial houses at their own game.

The courts found them not guilty of market manipulation this month, concluding that they were making the market more efficient by exposing a flaw in the system.

Meanwhile Mr. Larsen - and others - continue to beat algorithms. A few months ago he says that UBS failed to set a bottom limit on one of its trading algorithms and he picked up some stock at a discount. He estimates he made $14,000 in a few minutes.

It is not just Mr. Larsen getting the better of financial institutions. Eivind Stolen, a Swedish day trader, says he made several thousand dollars in seven minutes last year after a Morgan Stanley client algorithm went "totally haywire" in Atlas Copco and SSAB stock.

He says the computer started buying at the offer price and selling at the bid, instead of the other way round, and hundreds of people across the world piled in to take advantage, making a small spread on every trade they bought and sold straight back. Morgan Stanley was fined for this error on Wednesday.

"Every few weeks an algorithm is going wrong, and there is always someone making money from it," says Kjell Jørgensen, associate professor at BI Norwegian Business School.

John Bates, chief technical officer at Progress Software, a U.S.-based company that provides algorithmic trading software, says that every time there is a big failure of an algorithm because of a "fat finger" or programming error, behind the scenes there are always "some traders making a lot of money".

He points to some notable recent failures where day traders and others in the market likely made a profit, including when Deutsche Bank's trading algorithms in Japan took out an $182-billion stock position by mistake in 2010.

Another was in 2011 when a possible "fat finger" nearly wiped out ten Focus Morningstar exchange traded funds that had just been launched on Nasdaq OMX and NYSE Euronext .

Annika von Haartman, head of surveillance at the Nasdaq OMX Nordic stock exchanges, says that over the past two years they have seen more cases like this than ever before due to the rate at which new algorithms are emerging. "We deal with algo related issues on an everyday basis," she says.

Policy makers in Brussels want to tighten up regulation of high-frequency trading after fears about the integrity of these trading systems were raised in the wake of the "flash crash" in 2010, when the Dow Jones Industrial Average swung hundreds of points in 20 minutes.

In the meantime, traders contacted by the Financial Times say that their technique for beating algorithms is the same as beating any other trader: endless screen watching. This gives them a sense of how certain stocks behave, allowing them to spot quickly when something goes wrong. Often they do not know it is an algorithm they have beaten until after the event.

In the day-to-day, they stress that algorithmic traders are an overwhelming negative for them, making trading more difficult. But this makes it all the more satisfying when they outwit one of the big financial institutions. "We feel like Robin Hood, or David beating Goliath," says Mr. Larsen. 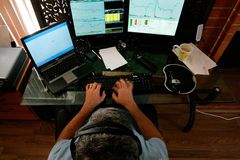 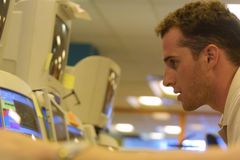