Enbridge Inc. is facing an investigation by U.S. officials into complaints that it coerced residents near its Michigan pipeline spill into giving up their rights to sue, in return for paying for items such as air purifiers and hotel rooms for those who were evacuated from their homes.

The complaints, which come from members of the House of Representatives transport committee, represent a setback to the Calgary-based company's aggressive efforts to restore its reputation among state and federal regulators and the residents who live near its sprawling pipeline system.

Enbridge - which operates a heavily regulated pipeline network throughout the U.S. - is fighting a public relations war over its Michigan spill, aware that, in the aftermath of BP PLC's devastating blowout in the Gulf of Mexico, the American public and regulators are particularly skeptical of oil company behaviour.

The House committee launched an inquiry into the July 26 rupture of a major Enbridge pipeline, which spilled 19,500 barrels of crude oil into the Kalamazoo River system. The company has since repaired the break and has conducted pressure tests aimed at persuading regulators it is safe to resume the 190,000 barrels per day in crude shipments from Alberta to Great Lakes refineries.

In letters released Wednesday, committee chairman James Oberstar, a Minnesota Democrat, and Representative Mark Schauer, a Michigan Democrat whose district includes the spill site, alleged that Enbridge asked individuals to sign waivers against further liability, in exchange for air purifiers, air conditioners and lodging expenses for those who lived closest to the spill and were forced to leave their homes.

The legislators also claimed that Enbridge demanded the residents provide the company with sweeping access to their medical records in exchange for payment of health-related bills. The congressmen have asked both federal and state attorneys-general to investigate, and officials are expected to look into the allegations.

"Enbridge's efforts to take legal advantage of Michigan residents under the stress of the immediate aftermath of the worst oil spill in the region's history are reprehensible," Mr. Oberstar and Mr. Schauer wrote in a letter to Enbridge chief executive officer Patrick Daniel.

Enbridge insists it did nothing wrong, that its waivers and releases were "standard" forms, and that it did not require residents to sign waivers to be reimbursed for direct expenses relating to the oil spill and resulting evacuation.

"From the outset, we indicated we are going to take full responsibility for all reasonable and non-fraudulent claims with regard to damages associated with this spill," Mr. Daniel told a teleconference on Wednesday.

"We feel that claim process has been effective. We're surprised and disappointed to hear that there may be some concerns around it."

The CEO said he did not believe the company had required residents to sign waivers in order to be paid for air purifiers, which some residents purchased in light of concerns about elevated levels of benzene and other chemicals in the air immediately after the spill. But he added he would look into the matter further.

An Enbridge spokeswoman, Terri Larson, said that some residents who filed for damages not directly related to the spill were asked to sign waivers. She said the release form prevented them from resubmitting a larger bill, but did not prevent them from submitting other claims or even suing the company.

In his letter, however, Mr. Schauer, who faces a re-election fight this fall, quoted from a "full and final settlement release" form - which he said was obtained from residents and staff of Enbridge - that discharged "all liability, claims, actions, causes of action, costs and expenses" against Enbridge.

Mr. Daniel has spent much of the past five weeks in Michigan overseeing the cleanup operation and the company's efforts to restore service and address the concerns of local residents. The company has even offered to buy homes from residents who believe the oil spill has devalued their property. To date, Enbridge has purchased three houses in the depressed town of Marshall, and has three other deals pending and 40 other appraisals under way.

Enbridge has completed remediation of the immediate area around the spill, subject to approval from the Environmental Protection Agency, and expects to complete the work along the Talmadge Creek and Kalamazoo River by Sept. 27. It expects to spend up to $400-million (U.S.) on the cleanup and claims - not including fines and lawsuits.

The company is hoping to reopen the pipeline in the coming weeks but Mr. Daniel said the federal regulator has given no indication of its time line for approving Enbridge's application. In fact, federal officials from the Pipeline and Hazardous Materials Safety Administration have suggested it is an "open question" whether the line would in fact be opened, though Enbridge clearly expects a positive response.

With files from Cigdem Iltan 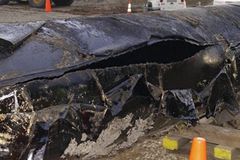 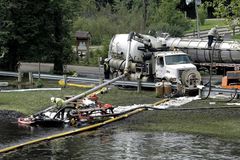 Crews in Enbridge spill shift from containment to cleanup
August 1, 2010 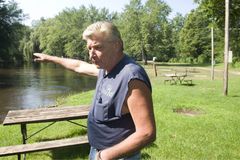 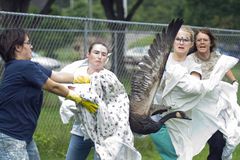 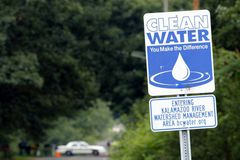 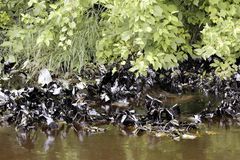