Encana Corp. is turning some of its attention back to oil in a sign of how persistently low natural gas prices are reshaping the energy industry.

The company, North America's second-largest producer of natural gas, has signed a series of joint venture deals that give it a substantial interest in extracting oil from a series of lucrative new plays sweeping across Western Canada.

Encana split itself into two a little more a year ago, jettisoning most of its oil assets by carving out oil sands producer Cenovus Energy Inc. Although that strategy meant losing the benefits of diversification - and drew criticism from some quarters - Encana believed investors were better served with separate companies, each focused on a single commodity.

And it has continued its aggressive pursuit of natural gas growth. On Thursday, for instance, the company's shares rose as much as 5.2 per cent amid market speculation that it is nearing completion of a major deal with China National Petroleum Corp. to speed development of its northeastern British Columbia gas holdings. A deal, Encana executive vice-president Mike Graham said this week, could be "an order of magnitude bigger" than a similar $565-million agreement with Kogas Canada Ltd.

But Encana is also quietly shifting back toward oil as the imbalance between low gas and high oil prices dramatically tilts the business of energy extraction. Across the oil patch, companies are slashing their gas spending and attempting new ways to profit from the gas they have. Canadian Natural Resources Ltd. will drill 72 gas wells this year, down from 900 in 2005. Talisman Energy Inc. signed a $1-billion deal late last year that will see it pursue construction of a plant in Western Canada to convert natural gas into liquid fuels.

"It's not surprising that everybody is migrating from the zero-profit commodity to the extremely high-profit commodity," said Peter Tertzakian, chief energy economist at Calgary's ARC Financial Corp.

Last year, for the first time in 40 years, the United States increased its crude production. Mr. Tertzakian expects the same trend to soon surface in Canada. Within two or three years, he said, "you are going to see a turnaround and growth in our conventional [non-oil-sands]oil production, too."

Even with such dramatic change afoot, Encana's new openness toward crude is striking. In recent months, it has signed joint venture deals with a number of companies to explore for oil on more than 465,000 hectares in Alberta and Saskatchewan.

"It does give us a lot of oil exposure," Stacy Knull, an Encana vice-president in charge of its southern Alberta operations, said in an interview. "But we're not scared of oil."

The joint ventures are a potentially major source of new revenue. They stem from a unique part of Encana's land holdings. The company owns more than three million hectares of "fee lands," on which it holds subsurface rights. In those areas, which were originally granted to the Canadian Pacific Railway in the late 1800s, Encana pays no royalty to the Crown.

Instead, it can charge royalties to other companies - a strategy it is now pursuing on lands that lie in some of Western Canada's most prominent new oil plays, including the Viking, Cardium and Alberta Bakken. Encana has agreed to allow other companies to explore some of its lands in exchange for a royalty of anywhere between 30 and 38 per cent.

In the biggest deal, it gave Crescent Point Energy access to a 350,000-hectare swath along the Montana border in what is known as the Alberta Bakken; the play that has drawn immense attention in the past year, including from major companies such as Royal Dutch Shell PLC.

By some estimates, the Alberta Bakken contains as much oil as Saskatchewan's Bakken play, or roughly five million barrels in place per 260-hectare section. With about 10 to 20 per cent of that recoverable, the Encana lands could contain a massive pool. Under the terms of its joint ventures, a company such as Crescent Point has access to the Encana land for a three- to five-year period, and must drill one section of land to earn an interest in it.

"They'd have to do a lot of drilling on that many sections to hold it all - and we encourage it because we make good royalties," Mr. Knull said.

Encana also benefits by having someone else shoulder all the risk for finding oil. If it likes what it sees, it can then make a decision to drill for oil itself - an option it is open to, Mr. Knull said. "We're definitely interested to see where this goes."

Similar deals on other lands have already proven desirable for the company. In 2009, Mr. Knull's unit was Encana's most profitable, in part because of a stream of royalty dollars equivalent to about 70 million cubic feet of daily production, or 6 per cent of Encana's Canadian total. 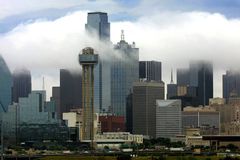 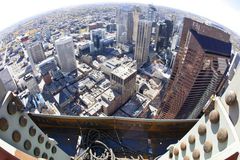