Canadian politics almost pulled Frank Stronach away from Magna International Inc. in 1988. Austrian politics has lured him away in 2012 – probably permanently.

The 80-year-old founder of the auto parts giant, which has risen to become one of the handful of global champions of Corporate Canada, is stepping down from the board of directors of the company he founded in 1957.

Mr. Stronach said he is too busy starting a new political party in Austria and getting his latest venture – a chain of steakhouses serving organic beef – up and running to remain on the board of a company that is on track to surpass $30-billion (U.S.) in sales this year for the first time.

"I'm involved so heavily in politics and it's not fair to the company," Mr. Stronach said in a telephone interview Thursday.

His decision to leave the board is the latest of several steps he has made in recent years to ease out of Magna, leaving it in the hands of professional managers who grew up in the company and pledged again Thursday to keep intact the culture and system he created.

Those steps include resigning as chairman in May, 2011, after the approval of a controversial $863-million (U.S.) deal to buy out the multiple voting shares with which he controlled the company.

He also sold most of the common shares that he was given as part of that deal. He now holds about 720,000 common shares and will remain as honorary chairman of Magna. Consulting contracts that will pay him tens of millions of dollars over the next few years will end in 2014.

The creation of the new political party in Austria, which has no name yet except Team Stronach, is taking up much of his time, Mr. Stronach said. The party received a boost Thursday when five members of a right-wing party defected to Team Stronach, whose main plan is to pull Austria out of the euro zone and restore the schilling. The party was granted parliamentary status when the five elected representatives joined it.

In 1988, Mr. Stronach ran for the federal Liberals in the free-trade election but was defeated in York Peel riding north of Toronto.

Like many entrepreneurs, however, he is most animated when talking about ventures that he believes will make money, something he has been successful at with Magna, but less so at horse racing and gambling company Magna Entertainment Corp., which collapsed into Chapter 11 bankruptcy protection during the recession.

His latest venture is steakhouses serving organic beef, from cattle raised on his 70,000-acre farm in Florida.

Permits are being sought next week for construction of three of the restaurants, called Adena Gourmet Grill. One is set for Aurora, Ont., where Magna is based and Mr. Stronach has a residence, one at Gulfstream Park near Miami, a racetrack he owns after having bought it during the Magna Entertainment Chapter 11, and another in Ocala, Fla., near the ranch.

"I start with three and hopefully they grow to about 100," he said. Plans are to open the restaurants late next year.

The cattle are "all free range, they're not locked up, there's no feedlots, it's all natural, no hormones, no antibiotics, they're grazing."

Mr. Stronach's resignation from the board came as Magna announced record third-quarter sales and share profit despite the deteriorating economy in Europe, where the company generated 27 per cent of its $7.41-billion in revenue.

The company raised its expectations for full-year sales to between $30.3-billion and $31.2-billion, but said German auto makers are starting to cut production. They represent about 70 per cent of Magna's business in Europe, so profits will be hit if production falls. 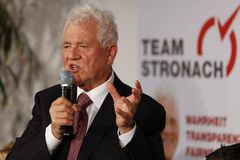 Frank Stronach pulls back on reins of racehorse IPO
May 1, 2018 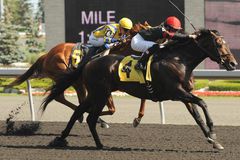