Bitcoin exchange-traded funds are coming, helped by the emergence of derivatives on the digital currency, according to industry executives.

Don Wilson, founder of Chicago-based trading powerhouse DRW Holdings LLC, said on a panel at the Futures Industry Association annual conference in Chicago that it seemed obvious that futures and options will lead to an ETF. His view was echoed by others who spoke at the event Thursday.

"Once a derivative is launched, a bitcoin ETF will follow," Mr. Wilson said in an interview after the panel discussion. "That's the common wisdom."

There are plans for bitcoin derivatives. LedgerX won U.S. Commodity Futures Trading Commission approval in July to offer options, while Cboe Global Markets Inc. wants to create futures this year or early in 2018, pending CFTC approval. There is currently no way to trade derivatives on bitcoin or other digital currencies in the U.S. right now, a roadblock for traders who want to hedge positions.

Creating an ETF on bitcoin has been a much harder task. The U.S. Securities and Exchange Commission rejected a bitcoin ETF proposed by Tyler and Cameron Winklevoss in March, saying the exchange that wanted to list it couldn't enter into necessary surveillance-sharing agreements given that "significant markets for bitcoin are unregulated," according to the agency. The exchange was owned by Bats Global Markets Inc., which has since been acquired by Cboe -- meaning Cboe might one day offer both futures and an ETF on the currency.

"It's a pretty reasonable assumption" that a bitcoin ETF is coming, said Michael Mollet, managing director of product development at the Cboe Futures Exchange. "People are looking for something fresh and new in the ETF space," he said. "Whether there's huge demand for it, we would find out. Certainly people are going to try it."

An ETF would give retail investors as well as institutions an easy way to get exposure to bitcoin, compared with buying or selling it on digital exchanges and holding it on a wallet secured to the blockchain, the software ledger that powers bitcoin and its cousins.

Bobby Cho, a trader at DRW's Cumberland Mining unit, said that within the next 12 months, "We can confidently say an ETF will come to market."

Even though LedgerX has received the go-ahead from the CFTC, it's not clear if they have begun to offer options trading. Asked if the exchange had started, Juthica Chou, a co-founder and chief risk officer, said, "I'm not authorized to talk about it."

While the CFTC has signed off on bitcoin options, its views are a bit more nuanced regarding its role in regulating spot trading in bitcoin. The SEC said earlier this year that many new cryptocurrencies, known as ICOs or initial coin offerings, appear to be securities that must be registered with the agency. Investors have poured more than $3-billion into ICOs this year.

CFTC Commissioner Brian Quintenz said Wednesday that ICOs may also be considered a commodity. He spoke a day after the CFTC issued a primer on digital assets and the blockchains that support them. The regulator classified bitcoin as a commodity in 2015, but hasn't done much on the topic since, Mr. Quintenz said.

"It was right to classify it as a commodity, but we still have a lot of work to do," he said yesterday to reporters at the FIA conference. "ICOs, these things can transform. They may start their life as a security from a capital-raising perspective but then at some point -- maybe possibly quickly or even immediately -- turn into a commodity." His comments were some of the most specific from the CFTC on the nature of ICOs.

"There are new challenges all over the place with virtual currencies and commodities," Mr. Quintenz said.

Canadian stock surges over 600% after switching from mining gold to bitcoin
October 12, 2017 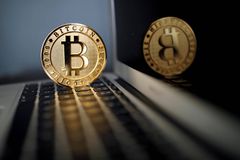 Bitcoin trades above $5,000 for first time ever
October 12, 2017
Chaos and hackers stalk investors on cryptocurrency exchanges
September 29, 2017
Report an error