If it takes five minutes to make five widgets on five machines, how long does it take to make 100 widgets on 100 machines?

This question was first posed by Shane Frederick of the Massachusetts Institute of Technology and was part of a three-question quiz called the "Cognitive Reflection Test." It was designed to test one's cognitive ability versus one's intuition. Half of you – or more – will get the answer by your intuition (100 minutes), but the cognitive – and correct – answer is five minutes.

This simple test underlines the idea that humans make cognitive errors when they answer questions with intuition. Artificial intelligence solves the problem of human bias and error. (In the five widgets/five machines example, output is one widget a machine every five minutes; therefore it would take 100 machines the same time to make 100 widgets.)

When making investment or other decisions, we are prone to errors, too. While automation will help solve for the cognitive errors we make, the bigger cost may be jobs. To be sure, how we work in the future will be changed significantly by robotics and AI.

Automation is largely been responsible for the rise in the value of U.S. manufacturing output – and the simultaneous decline in the number of manufacturing jobs. Many high-paying manufacturing jobs of past decades are likely not coming back, but engineering and programming jobs are flourishing.

One example is in horizontal fracturing. It used to require a team of 20 to operate a rig; the newest technology rigs can be operated with only five workers. Since oil prices bottomed in early 2016, the number of rigs in use has more than doubled, but almost no new jobs have been added in the oil sector. Simply put, the investment is not in people, it's in technology.

In the investment world, BlackRock Inc., the largest investment manager in the world with over $5-trillion (U.S.) in assets under management, has recently replaced a few dozen portfolio managers with AI.

A similar transformation is happening, on a smaller scale, at our firm: We are trying to remove the human-error bias by using AI in our asset-allocation decisions. I expect that the vast majority of portfolios in the world will be run by AI in the coming years.

It's not a leap to think that the computer can "listen" to management commentary and formulate price targets more efficiently than humans, and without bias. I've said for years, and it has been verified by many studies, that the biggest cost of investing is not the management expense ratio or adviser fee, it is the emotional cost of buying and selling driven by fear and greed. Making investment decisions based on intuition and emotion, rather than rational thought, is your biggest cost. AI will make the best investment decision possible based on facts and probability, and most importantly, without bias.

There are a handful of exchange-traded funds that allow investors to participate in the AI and robotics revolution. There are two types; the first are companies that manufacture robotics and building AI applications. Robo Global Robotics & Automation Index ETF (ROBO) and Global X Robotics & Artificial Intelligence ETF (BOTZ) are the early movers in the space. These hold companies globally that are involved in the sectors (many in Japan).

Since these ETFs launched in 2016, they have really taken off, each more than doubling the return of the Vanguard Total World Stock ETF.

The second type of ETF uses AI programs to select the companies in its portfolio. BUZZ US Sentiment Leaders ETF (BUZ), formerly Sprott Buzz Social Media Insights ETF, was launched in 2016 and has done well. Granted, it has underperformed the total U.S. market by about 0.5 per cent, annualized, with a bit more volatility, but that underperformance was because of the higher MER of the active strategy.

This ETF selects stocks based on their positive sentiment in the marketplace. The AI program scans the internet and social media and "understands" the sentiment and confidence in the stocks the ETF owns. It's been a relative short period and its efficacy should be evaluated over long periods, but it does strongly suggest that portfolio managers can be replaced.

Horizons launched its Active A.I. Global Equity ETF (MIND) on Oct. 31. It uses AI to look for patterns in the marketplace and allocates assets via ETFs, again showing that the portfolio manager can be replaced. This is not unlike the project I'm working on, in partnership with Alberta Machine Intelligence Institute (AMII), a research lab at the University of Alberta.

I believe that by making better investment decisions with AI, we can add 100 to 200 basis points of annual returns compared with the high emotional cost of traditional human-based security selection. (A basis point is 1/100th of a percentage point.)

According to DALBAR, a quantitative-based consultancy that calculates performance and returns, the long-run cost of emotional investment decisions is about 500 basis points annually. I believe AI can solve this emotional problem and help make better asset-allocation decisions.

It's an exciting field and I'm happy to be an early adopter. For now, I do not own any of these ETFs. The companies are on a great growth trajectory and I'm looking to buy them on the next correction, but I've been waiting for a year. That's the emotional problem. So, how many people does it take to increase economic output and improve investment performance? Fewer than before, that's for sure.

Editor’s note: An earlier version of this story used a previous name for the exchange-traded fund BUZZ US Sentiment Leaders ETF (BUZ). Also, this ETF has underperformed the total U.S. market by about 0.5 per cent, annualized, not 1.4 per cent, as published earlier. 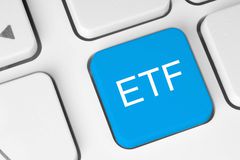