"Blockchain technology is creating revolutionary and disruptive change at many levels," Michael Kovacs, president and chief executive officer of Harvest, said in a statement. "During this nascent stage of development, blockchain technology is providing new opportunities for business, government and many other conduits of information and financial exchange. HBLK provides a simple way for investors to participate in the growth of this fast-developing sector."

Blockchain is an online digital ledger that keeps a record of recent transactions. Once a transaction is completed, it goes into a blockchain database and is kept as a permanent secure record. It is most commonly known as the technology behind the function of the booming cryptocurrency bitcoin – which soared above $18,000 (U.S.) last month.

With investors now becoming more comfortable with digital currencies and blockchain technology, ETF providers have been looking to get in on the game. Already there are at least two investment companies in Canada that have applied for regulatory approval to offer bitcoin ETFs. In the United States, there are another 19 ETF filings targeting bitcoin and blockchain technology including funds that would use leveraged or inverse strategies and could see returns rise – or fall – twice as fast as the price of bitcoin on a given day.

If approved, Harvest would be the first blockchain ETF to launch in North America. Mr. Kovacs says the company first started working on the investment idea last summer.

"It was during a time when everyone had a huge interest in bitcoin and cryptocurrency assets, but we had much more of an interest in the underlying technology around the blockchain," he adds.

Mr. Kovacs hopes to launch HBLK later in the first quarter of 2018 based on regulatory approval, and says unlike bitcoin, blockchain technology is becoming a more common business strategy with many large-cap companies such as IBM Corp. and Accenture PLC.

A listing of the top holdings in the index is currently unavailable to the public as the index is pending regulatory approval. 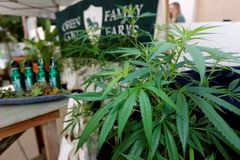