A study by EquityClock on performance of the S&P 500 Index during presidential election years, based on data for the past 65 years, shows that the Index slightly underperformed average years by realizing a return per period of 6.7 per cent while recording significant seasonal variations from average during the year.

Variations during a U.S. presidential year corresponded with changes in political rhetoric exhibited during the political campaign. The S&P 500 Index slightly underperformed during the first two months of the year when final candidates for the Republicans and Democrats were not known and political rhetoric was relatively low. The Index briefly outperformed into early April after results from state primaries began to narrow the field of presidential candidates. The S&P 500 Index moved strongly higher from the end of May to at least the middle of August during a presidential election year, corresponding to selection of final candidates at party conventions.

In contrast, average return for U.S. equity markets from early May to near the end of October has been close to 0 per cent. Thereafter, until near the end of October, U.S. equity indexes moved lower when chosen candidates began battling each other and political rhetoric was ramped up. After the U.S. president was elected on the second Tuesday in November, the S&P 500 Index moved higher in anticipation of expected favourable events announced in the president's election platform. The Index traditionally closed at or near its high for the year. 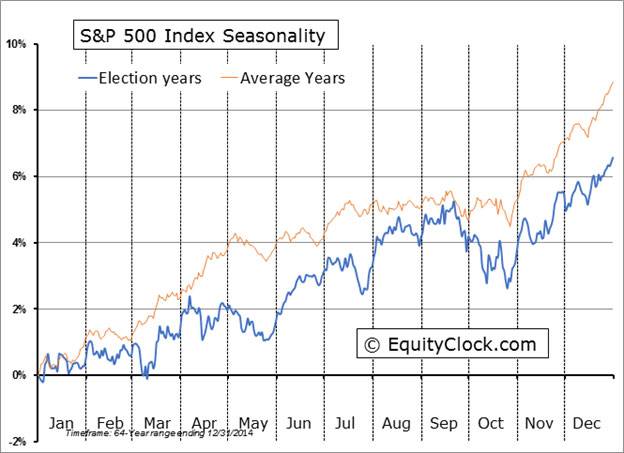 Events in early 2016 are evolving as usual. Final selection of party candidates has yet to be settled. Recent poll suggest that Hillary Clinton is, by far, the leading candidate for the Democrats. The Republicans officially have 13 candidates who are committed to stay in the contest until at least the Iowa Caucus on Feb.1 and New Hampshire primary on Feb. 9. The field of Republican candidates is expected to narrow significantly shortly after "Super Tuesday" on March 1, when 13 primaries are scheduled.

Well-funded Political Action Committees, better known as Super PACs, are expected to dominate media advertising during the last three months prior to the election. Legal changes reached after the last election greatly enhanced the ability of Super PACs to spend money on advertising. Negative advertising by Super PACs was the trend during the U.S. mid-term elections in 2014 and is expected to be a major influence during the 2016 election season. After a new president is elected on election day, Nov. 8, U.S. equity markets likely will follow their traditional pattern of moving higher until the end of the year.

How to invest? Owning U.S. equity indexes and their related Exchange Traded Funds (in U.S. dollars) has been a profitable strategy in the past and is expected to be profitable in 2016. The most liquid ETF tracking the S&P 500 Index is S&P 500 SPDRs (SPY-N). Canadian investors can choose from a wide variety of ETFs trading in Canadian Dollars that track the S&P 500 Index including iShares Canadian S&P 500 (XSP-T) (hedged), Horizons BetaPro S&P 500 units, BMO S&P 500 hedged to CAD (ZUE-T) and First Trust AlphaDEX U.S. Dividend plus CAD hedged (FUD-T).

Don and Jon Vialoux are authors of free daily reports on equity markets, sectors, commodities, and Exchange Traded Funds. Daily reports are available at http://TimingTheMarket.ca/ and http://EquityClock.com. The enclosed report is for information only. It should not be considered as advice to purchase or to sell mentioned securities. Data offered in this report is believed to be accurate, but is not guaranteed.

Follow Don Vialoux,  on Twitter @EquityClock
Report an error Editorial code of conduct
Due to technical reasons, we have temporarily removed commenting from our articles. We hope to have this fixed soon. Thank you for your patience. If you are looking to give feedback on our new site, please send it along to feedback@globeandmail.com. If you want to write a letter to the editor, please forward to letters@globeandmail.com.
Comments