Managers of a new investment fund have a message for those who made staggering gains from bitcoin before the recent sell-off: diversify and avoid the fate of early dotcom believers who were wiped out when tech crashed.

"They need to diversify -- take a portion of the profits and do what Mark Cuban did," says Marcus New of InvestX Financial (Canada) Ltd., referring to the billionaire who made his fortune in the early days of the Internet. "What we've tried to do is to make it really easy for them."

While a slew of funds already accept cash to invest in virtual currencies, Mr. New believes his fund may be the first to do the opposite: take cryptos to invest in a traditional asset class, in this case private companies about to go public. There's a reason most of the money has been going the other way. Nine funds buying digital currencies tracked by Eurekahedge Pte soared 1,167 per cent in 2017, trouncing the 8-per-cent returns of hedge funds globally.

Vancouver-based InvestX says it's selling prudence, not the biggest returns, with its new fund that launches Thursday for U.S. and international investors, with a target to raise $100-million.

"Many of the people in cryptos are long-term believers that this asset class is going to make them hundreds of millions of dollars so they're shifting from bitcoin to other alternative coins," said Mr. New. "I heard the exact same thing being said in the dotcom era except 'alt coins' was 'dotcom stock."'

Bitcoin Investors "Should be Prepared to Lose All Their Money"

Whether InvestX can convince the crypto nouveau riche to cash out remains to be seen. Bitcoin investors face challenges monetizing their wealth: sellers can wait days to convert digital coins into regular cash, while the costs are too high for everyday transactions. True believers have an ideological aversion to selling out as they see a remaking of the global financial system.

The recent plunge in bitcoin and other currencies may be changing those views of course. Bitcoin tumbled below $10,000 Wednesday, bringing its loss to more than 50 per cent from a record set only a month ago, as increased scrutiny from regulators around the world weighs on the digital-coin craze.

InvestX will accept cryptocurrencies for investment in private companies headed for initial public offerings. Notably, the structure may also offer investors tax benefits as governments seek to take a share of the profits made from virtual currencies.

Investors can use bitcoin, Bitcoin Cash, Ethereum, Litecoin and Dash to buy units in the fund by transferring the digital coins directly into InvestX's digital wallet. InvestX will convert the cryptos at spot rates into U.S. dollars. The fund will invest in 12 to 15 private companies, each valued at at least $1-billion, with an average targeted growth rate of at least 40 per cent. The companies must also show evidence of a "liquidity event" -- an initial public offering, merger or sale -- within 12 to 36 months, said Mr. New, who estimates only about 50 companies globally meet that criteria.

"Crypto investors in general are very global and so are these late-stage companies -- most investors would be familiar with them," he said.

The fund will give them access to late-stage private equity and venture capital deals typically unavailable to individual investors -- something InvestX specializes in. Since 2014, accredited retail investors have used the company's online platform to buy shares in companies including Dropbox Inc., Spotify Ltd. and Pinterest Inc. A total of $35-million has been invested to date.

InvestX gets access to those deals by tapping into "odd lots" -- less than $25-million investments in private placements that are too small for institutions but provide an exit for early investors.

"There's a really great sweet spot of investing in these companies three years prior to a liquidity event, where we buy them in a very inefficient market," Mr. New said.

So-called "growth equity" companies have been among the best-performing traditional asset classes, returning 15 per cent annually over the last 25 years, compared with about 10 per cent for the S&P 500, according to Cambridge Associates.

The Delaware-registered fund will be open to U.S. and international investors. The minimum investment is $100,000 with a four-year lock in. Because the fund will buy stakes in private companies, there is limited liquidity until an exit, InvestX says.

"The psychology of this investor is very different than a traditional investor," acknowledges Mr. New, who says he spent months imploring one crypto baron to diversify beyond digital coins.

"Diversify it -- whether you put it in a fund or into real estate or into an ETF," says Mr. New. "But please, please take some of your profits and put it somewhere else."

A battle of wills has erupted in the world of bitcoin
Subscriber content
January 17, 2018 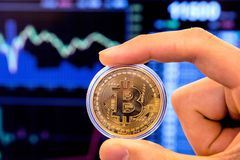 The charts are saying something telling right now about where bitcoin prices are heading
Subscriber content
January 17, 2018 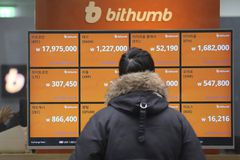