A mutual fund company wants to charge a guy we'll call Nick a fee of about $3,575 to get his own money back.

The fund company calls it a deferred sales charge. Think of it as a vestige of a time when fund companies dominated the world of retail investing and could dictate the price of their products. Memo to investors: Those days are so over. If you're buying or selling any mutual fund, there should be no fees involved.

Nick bought his investment in a major fund company's products through an adviser using the deferred sales charge (DSC) model. The deal was this: Pay nothing to buy the funds, but prepare for a redemption fee if you sell in the first seven years after you buy. "What I remember hearing is that in order to save the most money, this is the best option to go with," Nick said.

The DSC used to be an alternative to the front-end load, where you paid a commission of 2 per cent or more to buy funds. But according to what the analysis firm Investor Economics is hearing from people in the fund business, virtually all front-end-load transactions today are done with the commission waived. In other words, most people buying mutual funds from advisers pay nothing to acquire their funds.

A small but growing percentage of funds are sold under the low-load model, where a deferred sales charge would apply only for funds that are redeemed in less than two years. But classic DSC is in retreat. Research firm Investor Economics says this sales option accounted for 16 per cent of fund assets at March 30, compared with 20 per cent five years earlier. Redemptions of DSC funds consistently outpace new sales.

Roughly half of mutual fund assets are held in no-load funds, which cost nothing to buy or sell. They're sold mainly by banks, but also by smart independent money-management firms such as Leith Wheeler, Mawer and Steadyhand. It's the load-fund world that brought us the loathsome DSC.

A reasonable goal for 2016 is that no investor buys a DSC fund. If an adviser says it's DSC or pay an upfront commission, quote that Investor Economics info about front-end fund commission being waived in most cases. Remember, advisers and their firms are well paid through the trailing commissions they receive out of the management fees – known as a management expense ratio, or MER – investors pay to own mutual funds. Upfront or deferred sales charges are unwarranted in today's more price-competitive investing world.

Nick has a registered retirement account of roughly $65,000 that he'd like to redeem and move to another firm. The deferred sales charge he's been quoted is 5.5 per cent, or $3,575, which he figures he'll pay rather than keep the status quo. "I'd rather take the hit of $3,500 or so as opposed to leaving it there with some clown skimming off fees for doing absolutely nothing. That's where I am right now."

Nick's story offers multiple perspectives on the oppressiveness of DSC, starting with the way it glues investors to their advisers with no consideration for the level of service. Nick believed he would receive a certain level of advice and assistance, but after a brief honeymoon he found himself disappointed. He says mistakes were made with his account that resulted in letters from the Canada Revenue Agency, which claim he over-contributed to his tax-free savings account and must pay a fine.

Out of the country for a while, Nick relied on his adviser to look after matters such as this. But the disappointing service wasn't what finally pushed him to consider leaving. That happened when his adviser told him at a recent social gathering that she was leaving her firm and moving on. Another adviser was supposed to contact Nick, but he's still heard nothing. "That's when I started to think, I'm done with these guys."

DSC is sometimes defended by advisers because it helps clients stay invested at times when they're tempted to sell and lock in losses that might otherwise turn into long-term gains. What nonsense. Strong financial planning and portfolio construction keep clients invested, in large part because they can accommodate the kind of evolving life circumstances that Nick is experiencing.

He's a 35-year-old who is changing careers, and his financial approach needs some adjustment. "I'm part of a generation that's recasting itself every three years," he said. "Locking stuff in for seven years is dangerous."

If you've owned DSC funds for a few years and are a satisfied customer, there's no need to do anything because the passage of time will eliminate your redemption fees. If you're a recent buyer and have concerns, be aware that many firms allow you to redeem 10 per cent of your DSC holdings at no cost every year. This provision isn't cumulative, so use it or lose it.

People are who just starting with a new adviser should adopt a strict no-DSC rule. Low-load funds are a barely acceptable compromise, given that they're just a less confining version of DSC. Ideally, you pay zero in buy and sell commissions, thereby leaving advisers and investment firms to live off the ample compensation built into the fund fees.

Use these guidelines until securities regulators finally deliver on much-needed changes to the way advisers are compensated for their work. Regulators have been studying the idea of having advisers charge a straight-up advice fee set as a percentage of a client's account holdings. This would stick a fork in the trailing commissions built into fund fees, as well as front-end and deferred sales charges.

Instead, advisers would be paid directly through an advice fee and mutual fund companies would be paid separately through the MER fees they charge investors who own their products (fund returns are always shown after these fees are deducted). There's no room in this compensation model for DSC funds. They're a remnant of the mutual fund industry's dinosaur period and can't reach extinction too soon. 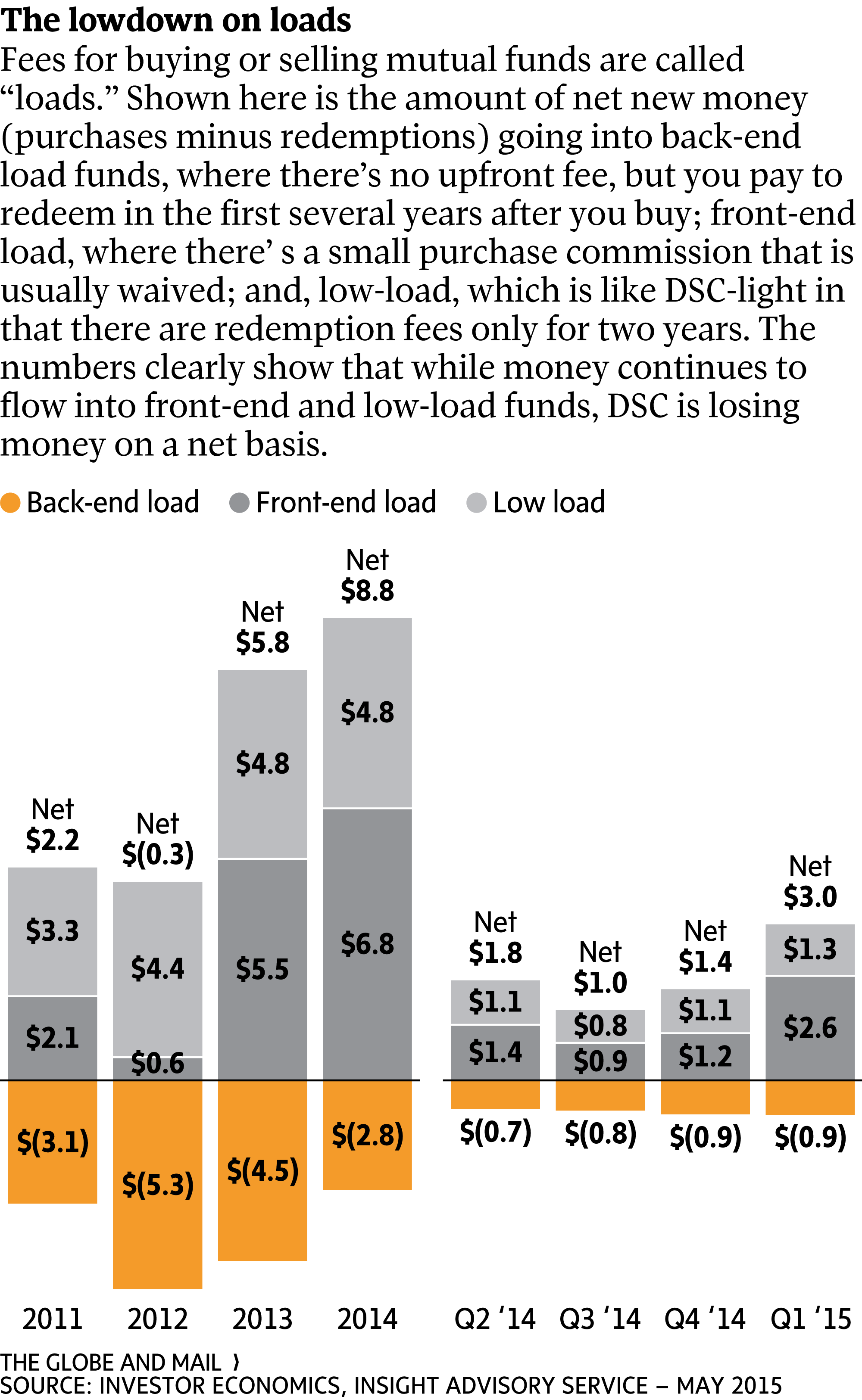