"So much of the index is dominated by the banks, the energy and materials companies," said Conrad Dabiet, a portfolio manager at Manulife Asset Management.

"But we can find opportunities in companies that aren't as followed, or aren't large weights in the index. And we've been able to do this without giving up much of what you'd expect from a dividend fund."

Specifically, that means a decent yield, the prospect of good income growth and the stability that typically comes from a basket of dividend payers.

By running a fund that combines balance among Canadian sectors with strong dividend fundamentals, Mr. Dabiet and his team have managed to realize award-winning returns.

The Lipper Fund Awards recognized about 80 Canadian mutual funds and exchange-traded funds, including Manulife's Dividend Income Fund, which beat all its peers in returns over the past three and five years. (As the fund launched in 2012, it was ineligible for the 10-year category.)

That fund posted annualized returns of 10 per cent and 14 per cent, respectively, over those time frames.

With two-thirds of its value based in three sectors – financials, energy and materials – and with relatively little variety in technology, consumer and health-care sectors, the S&P/TSX composite index provides a shoddy template for balance in portfolio construction.

But Mr. Dabiet said he has little trouble in finding worthy Canadian names outside of the big three sectors. "Health care is one that is definitely under-represented. But even in technology, there are opportunities out there."

Information technology combined with consumer discretionary and staples stocks account for close to 25 per cent of the fund's holdings, while the main Canadian index has about half that level of exposure to those three sectors.

Meanwhile, the fund is considerably less heavily weighted in financials, at about 17 per cent, compared with the index's financial sector weighting of 35 per cent.

The list of the fund's top holdings also differ considerably from the average Canadian dividend fund.

The single largest holding is in Waste Connections Inc., the Toronto-area solid-waste-services company.

"It's a business that's easy to understand. It's run by a strong management team with an amazing track record of creating shareholder value," Mr. Dabiet said. It also has high recurring revenues, strong cost management and margin expansion, and generates a lot of free cash flow.

Those qualities add up to a compelling earnings-growth outlook sufficient to fund dividend payouts – and also reinvest in the business itself, he said.

And it's that kind of company that is well positioned for a rising-rate environment, Mr. Dabiet said. While certain rate-sensitive sectors and high-yielding stocks may be vulnerable as interest rates continue to rise, there is protection in companies that can continue to expand, he said. He said he considers Telus Corp. and Pembina Pipeline Corp., which are also top fund holdings, to be good examples.

"No matter where interest rates are down the road, they're building bigger and better businesses that should be worth more over time."

Another of the fund's significant holdings is in cash, which represents almost 20 per cent of assets and reflects a more cautious stance as a result of current valuations.

"It's the one-year anniversary of President Trump's election, and there's been a significant rally in the U.S. stock market," Mr. Dabiet said. "We've seen a big, big jump in stock prices in general, and there seems to be a lot of optimism out there."

The fund's sizable cash hoard can allow for both daily adjustments in positions and the potential for bigger moves when mass bargains arise, as they did in early 2016, when the S&P/TSX composite index started the year with a 9-per-cent decline over three weeks.

"The valuation of these businesses in reality changes much less frequently than what happens in the market," Mr. Dabiet said.

One-year since Trump’s win, U.S. funds enjoy strong growth
November 7, 2017
Why this product is generating so much buzz in the mutual fund industry
November 3, 2017 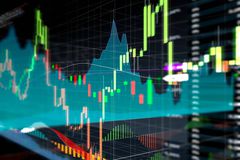