As the man who built AIC Ltd. into a mutual fund powerhouse in the 1990s, Michael Lee-Chin preached the "buy, hold and prosper" mantra. Now, he's selling after years of holding without prospering.

For Mr. Lee-Chin, who modelled himself after Warren Buffett, running mutual funds was a storybook rags-to-riches career. But stock markets that made the AIC owner a billionaire took away a sizable chunk of his fortune in recent years. Yesterday, the 58-year-old sold his Canadian mutual funds to Manulife Financial Corp. for an undisclosed amount.

"It is a bittersweet day," said Mr. Lee-Chin, who bought the AIC Advantage Fund in 1987 with less than $1-million in assets. "It's been my baby for nearly 23 years. It's my passion and my legacy."

When AIC's value-oriented style was clicking in the 1990s, funds outperformed and assets hit $15-billion. In 1999, Mr. Lee-Chin considered selling a stake in an IPO that, sources say, valued the firm at $1.8-billion, only to remain private.

There was a company helicopter sitting outside the Burlington, Ont., head office.

However, AIC's stubborn commitment to owning just a handful of stocks, including financial services companies, meant many of its funds underperformed in recent years. Investors redeemed with frightening regularity, month after month. As the market meltdown clobbered AIC's positions in banks and money managers, Mr. Lee-Chin began quietly shopping AIC more than a year ago.

Manulife is buying a company with just $3.8-billion of assets. While AIC and the insurer did not release a price, sources estimate Mr. Lee-Chin will receive less than $150-million. True to his faith in financial services, Mr. Lee Chin is taking full payment in Manulife stock.

"The transition [to Manulife]is the bitter part," he said. But moving to future plans for his privately owned Portland Holdings company, he said: "The sweet part is that we are really the quintessential investment firm in Canada. [Portland]is a foundation from which we can grow our global asset management business."

In other words, Mr. Lee-Chin sees the sale of AIC as the beginning of a new career, not as an inglorious ending. Friends take a similar view.

"I don't believe Michael has been defeated. He continues to conduct himself with great dignity," said William Thorsell, chief executive officer at the Royal Ontario Museum. He said Mr. Lee-Chin's priorities have shifted to building the Jamaican bank, and that in a recent speech to ROM donors, the AIC founder "spoke passionately of the need to remain calm in difficult times, and stay true to your business principals and your roots."

Through Portland, Mr. Lee-Chin will continue to run a number of AIC funds as a sub-adviser to Manulife. He plans to use Portland to expand a Caribbean empire that includes control of National Commercial Bank Jamaica Ltd. and real estate.

In recent months, he faced pressure to put more cash into some of these Caribbean companies.

Within the industry, there's a sense that Mr. Lee-Chin made the best of a bad situation by selling AIC.

While the fund industry is already highly consolidated - with the top 10 players controlling 80 per cent of the assets under management - Brad Hardie, head of Bank of Montreal's financial institutions team, said: "We will see more deals like the AIC deal."

"The business is all about distribution and scale. Players who fall short in those areas are vulnerable to being taken out," he said.

With file from Tara Perkins

From rags to riches

It is the stuff of fairy tales. Born into poverty in Jamaica, Michael Lee-Chin got to Ontario's McMaster University on scholarship, earned his engineering degree and then took a job flogging mutual funds. While successful, he realized that the real money was to be made running funds, not selling them. He took over a $1-million fund in 1987 and spun it into a $15-billion money manager in just over a decade.

AIC Ltd. made Mr. Lee-Chin a billionaire, and he had all the toys, including the same type of $60-million Global Express corporate jet used by Bill Gates, and two caged parrots in the AIC lobby, named Calypso and Fantasia (trained to squawk "buy" and "hold").

The fairy tale ended yesterday. With assets down and investors walking as AIC underperformed, Mr. Lee-Chin sold the fund manager to Manulife. 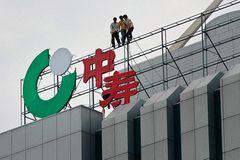