Gildan Activewear's battle to win shelf space from market leaders Fruit of the Loom and Hanesbrands was thrown a legal curve after the Montreal-based company was sued in the United States for relabelling one of its rival's clothing and selling it to consumers.

Fruit of the Loom affiliate Russell Brands accused Gildan of trademark infringement and unfair competition for selling about US$100,000 worth of its Jerzees brand clothing. It claims Gildan labels were added to the clothes or Jerzees labels were "ripped out" and replaced with a Gildan label.

The legal skirmish comes a few weeks after Gildan replaced its competitor as the supplier of men's and boys' fleece to Dollar General stores in the United States.

Gildan was required to purchase about US$1-million worth of Jerzees inventory when it won the Dollar General contract and began to supply the retailer with its own Gildan Smart Basics label products.

Typically, it would resell the inventory with their original labels in the seconds market, where flawed or irregular products are sold at a discount.

Chief financial and administrative officer Laurence Sellyn said Gildan is conducting an internal review to determine how the error was made at one of its distribution centres in the United States.

Calling the error "a small glitch," he said no one at Gildan's corporate office was aware of the label switch.

"It was certainly an unfortunate error," he said in an interview.

"We have no desire to compromise our own brand, which we are very proud of, by confusing it with a competitor' product."

Although the value of the mislabelled products was "not material," he said the company was treating the matter seriously to ensure it never happens again.

Gildan manufactures and sells T-shirts and fleece, but is trying to expand retail sales of its own Gildan branded socks, underwear and activewear.

It has about 30 per cent market share in socks but is very small in underwear and activewear. Construction of its Rio Nance 5 manufacturing facility in Honduras has given Gildan the capacity to consistently supply these new low-cost products to retail mass merchants.

Mr. Sellyn denied that Gildan is targeting any particular competitor but said the company hopes to attract more retailers to switch their private label suppliers and achieve "penetration against Fruit of the Loom and Hanes."

"We feel we have a major opportunity to lever the same competitive strengths that have made us successful in the screenprint market to drive market share in retail," he said.

In addition to seeking to expand its Gildan brand, it is trying to harness the potential of its Golden Toe acquisition by adding new product categories. The transaction made it the exclusive supplier of New Balance socks in the U.S. It is now adding performance T-shirts through its printwear distribution channel.

"I don't know if they need to be worried but Gildan is definitely making retail a greater focus than it has been in the past by going after these branded products and that's something that Hanesbrands and Russell are going to have to deal with going forward," he said in an interview.

Mr. Dley said Gildan is a stock investors "must own" as it prepares to provide its fiscal 2013 guidance on Nov. 30.

Lower cotton costs should add $1.30 per share in earnings, and Gildan should gain market share from the acquisition of Anvil, as well as the exit of Hanesbrands from the wholesale channel.

Martin Landry of GMP Securities recently raised his target price for Gildan stock by $4 to $40. He said the company has benefited from sustained U.S. screenprint industry price increases and market share gains.

"In addition, the product introductions for 2013 appear to have been well-received and should provide Gildan with additional avenues for organic growth above industry growth rates," he wrote in a report.

Mr. Sellyn said Gildan's earning's recovery is due to lower cotton prices, strong market demand and its own efforts to reduce costs and grow sales volume by investing to add new production capacity.

He sees no reason why the incident with Russell Brands should compromise investor confidence in the company.

"While this is a regrettable incident that we wouldn't want to reoccur, the positive side is that we are being successful in obtaining new branded program for retailers at the expense of competitors."

As Gildan rebounds from crisis, CEO’s gamble pays off
August 29, 2012 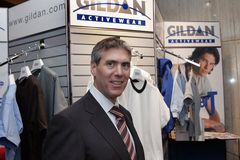 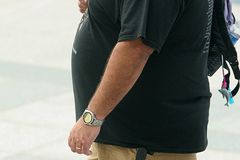 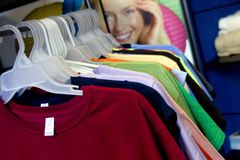