Buying Gildan Activewear Inc. on bad news has been a good strategy during the T-shirt and sock company's 14 years as a public company.

Remember when a stash of marijuana was found on a boat carrying the company's T-shirts in 2001? The stock took a hit, then recovered after it was clear the company wasn't linked to the dope. Four years ago, the stock fell sharply on concerns about production hiccups at its Dominican Republic facilities. Again, a full recovery. Along the way Gildan established itself as the low-cost leader in the wholesale T-shirt and active wear business, expanded into socks, and has begun to expand its presence at retail.

So it's not surprising that the Montreal company's most recent headache is looking more like a short-term blip – and a buying opportunity.

On Dec. 1, Gildan stock fell by 33 per cent to $16.54 after it warned that high cotton prices and weak demand would result in its first quarterly loss in 10 years. When Gildan announced Wednesday that its first quarter from hell would be slightly better than expectations – that it had largely contained the damage and was holding firm to its estimate that it will earn $1.30 per share this year – the market exhaled. Gildan stock closed at $23.86 Thursday, up 7.7 per cent, following a 5.3-per-cent gain the day before.

"With the news, they have taken an important step toward rebuilding investor confidence that they are in charge of their overall business," said Scott Rattee, an analyst with Stonecap Securities in Toronto.

To be sure, the news was not pretty. Gildan reported a net loss of $46.1-million (U.S.), or 38 cents a share. Net sales of $303.8-million in the quarter, down 8.3 per cent from the same period a year earlier, were slightly better than the $300-million the company had suggested two months ago.

Gildan was caught out by a dramatic spike in the price of cotton that had little relationship to underlying market fundamentals. The material, which had traded at around 65 to 70 cents a pound for years, shot up suddenly in July, 2010, trading at a monthly average of more than $2 a pound from February to April, 2011, before easing off substantially.

In response, Gildan implemented a series of price increases. But when the price of cotton began to plummet toward $1 by late summer, wholesalers – which account for the majority of its demand – didn't want to be stuck with high-cost product. Knowing that prices would come down, they ran down inventory levels rather than buying expensive shirts from Gildan.

To address the situation, Gildan gave its wholesale customers a rebate in December to encourage them to take the expensive product off its hands. The ploy worked. "Gildan took the more aggressive route, instead of smaller, more gradual promotions. At this point it would appear they made the right call," said Mr. Rattee.

Gildan is still moving higher-priced cotton through its system, which will weigh on earnings in the second quarter. But Gildan chief financial officer Laurence Sellyn said the expensive cotton should be gone by early July: "Once we're through consuming the high-cost cotton we expect to be back to our normal trajectory of strong sales and earnings."

Raymond James analyst Kenric Tyghe said Gildan is well positioned to gain market share on store shelves for its shirts, fleece and active wear following its 2011 purchase of sock manufacturer Gold Toe Moretz, which has strong brands and relationships with big U.S. retailers such as J.C. Penney and Kohl's.

That leaves the question whether, after the brief runup in Gildan stock, there is any value left for prospective investors. Many analysts say there is. "We still believe there is long-term value in Gildan shares," RBC Dominion Securities analyst Tal Woolley said in a note, in which he maintained his $30 price target on the stock. 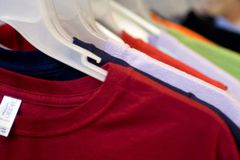 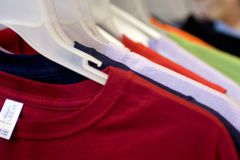