But how much confidence is too much?

I've spoken before about the dangers of overconfidence. The tendency to assume good times will last while ignoring signs that point to the opposite – this has been the downfall of many an investor, both amateur and professional. I remember Warren Buffett's advice: "Be greedy when others are fearful, and fearful when others are greedy." It's the second part that rings in my ears right now.

Unfortunately, there is no one particular statistic or data point you look at to determine whether investors are being greedy. But something I keep my eye on is margin debt, the amount of money lent out for investment.

While it's not perfect, margin debt is a fairly good proxy for stock market confidence (despite the data lagging a few weeks when published). And that's because there's only one logical reason why anyone would borrow money to invest: They're confident the value of a given investment is going up and would like to leverage their bet. Historically, there's been a strong correlation between margin debt and market corrections. Tracking the amount of margin right now should provide a fairly good indication of how many investors are feeling confident – and how vulnerable equity markets are if that confidence were to dissipate.

The chart below tracks the level of margin debt against the S&P 500 equity index. There are three immediate takeaways from these data.

Margin is near all-time highs

First, the obvious: Margin continues to be very high by historical measures. While it has bounced around over the past couple of years, it is near an all-time high.

We are vulnerable to a shock

The high level of margin suggests there's a definite market vulnerability to an economic "shock" – a sudden, sharp rise in interest rates, disappointing economic data, or maybe a negative political event such as a U.S. trade war with China, or increased Russian belligerence.

Of course, investors have to deal with these kinds of "what ifs" all the time. But the level of margin suggests that there is a large (and growing) number of investors who will not be able to "wait it out" should a shock occur. They will have to post new money to cover their margin obligations. If they can't continuously post new dollars, as markets head lower, they will be a forced to sell their positions, which can compound the intensity of selling pressure and subsequently the length of a market downturn.

It's time to get hedged

I want to be clear: The accompanying graph is not a signal to sell everything and stuff your cash under your mattress. Rather, it's a flashing yellow, a signal to proceed with caution. Trimming back speculative positions, building up cash, double-checking your analysis before committing new money – all of these seem prudent in the current climate. Above all, it's time to hedge positions, and protect gains.

I've spoken before about how high-net-worth individuals have increased hedging activity over the past several months, primarily with uncorrelated private equity and other alternatives. They're also putting their money with long/short managers who can short specific stocks, or sectors, or the market as a whole. This gives them a degree of downside protection – a way of turning crisis into opportunity. For high-net-worth investors, the percentage being allocated to these hedged strategies has been rising since early 2015.

I often tell clients that margin is a kind of "turbo boost" for the portfolio. It amplifies the speed and intensity of investment moves (either up or down). After several years of climbing up, the data suggest it might be time to take the foot off the pedal, as there may be a very steep downhill road ahead. 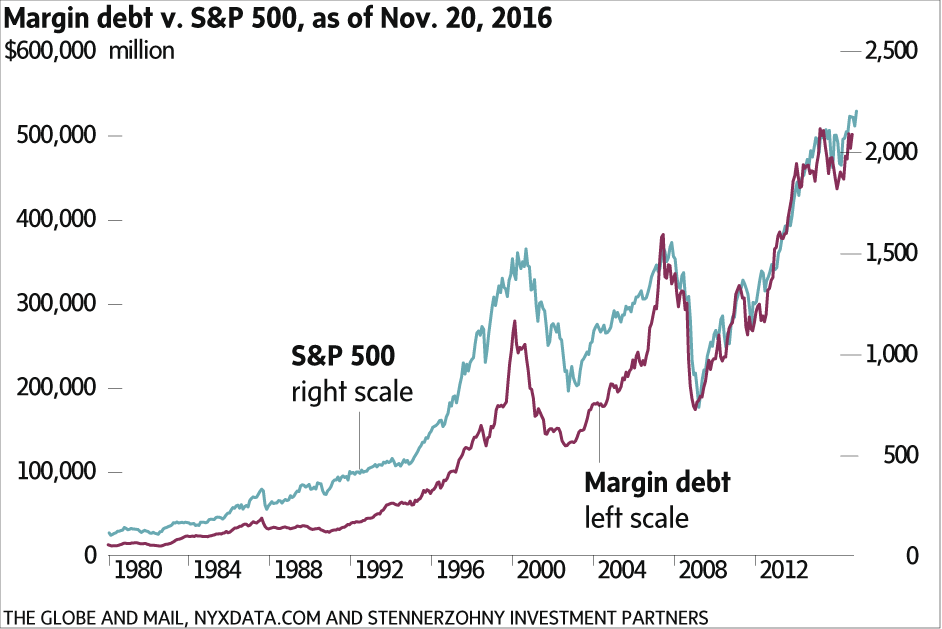 Grab-bag of risks halt energy’s stock-market gains
Subscriber content
January 17, 2017
Follow us on Twitter @globeandmail Opens in a new window
Report an error
Due to technical reasons, we have temporarily removed commenting from our articles. We hope to have this fixed soon. Thank you for your patience. If you are looking to give feedback on our new site, please send it along to feedback@globeandmail.com. If you want to write a letter to the editor, please forward to letters@globeandmail.com.
Comments