As a hockey-obsessed young man, I remember plenty of Saturday nights spent in front of the TV watching my idols Bobby Orr, Guy Lafleur and, later, Mr. Gretzky himself. I watched them for one simple reason: to be a better player. In a lot of ways, the experts were the best coaches I ever had.

I believe you can do the same thing with investing, by watching great investors such as Prem Watsa, Peter Lynch and, of course, Mr. Buffett. Over the years, the lessons I've gleaned from these investment greats have been very valuable, and very profitable.

Another group of people worth watching are the members of TIGER 21, a North American peer-to-peer network for investors with a minimum net worth of $10-million (U.S.).

Related: Traders are betting that volatility is about to spread

Every quarter, the network asks its members to respond to an anonymous survey about their portfolio allocations: what assets they're buying, selling or holding, and how those decisions have changed over the past quarter. Paying attention to what these successful investors are doing with their money can be like a "master class" in investing and risk management.

TIGER 21 (The Investment Group for Enhanced Results in the 21st century) was founded back in 1999. Since then, it's grown to an active membership of about 400 individuals with an aggregate net worth of over $40-billion. It has groups in most major North American cities, and its members are all highly successful investors and capital allocators. Taken together, they represent an impressive bunch of "coaches" for anyone who wants to become better at building and preserving wealth.

Looking back at the past quarter, there was continued uncertainty heading into a highly contentious U.S. election. Unsurprisingly, this mixed environment caused many TIGER 21 members to maintain a more cautious, defensive stance with their portfolios. As always, there are several takeaways from the data.

Steady and defensive with cash

One of the most notable changes over the past several quarters has been the slow, steady rise in allocation to cash. While allocation held steady this quarter at 11 per cent, it remains a strong signal that HNW investors remain notably cautious about market volatility.

Keep in mind that the asset allocation data in the graphic below were collected during the lead up to the recent U.S. election, but well before the unexpected result was announced. I wouldn't be surprised if TIGER 21 members continue to build liquidity in the months ahead.

Many professionals seem to be already doing that: Warren Buffett is now sitting on a cash hoard of about $85-billion (U.S.) (about 23 per cent of Berkshire's current market value), while pension/endowment manager GMO is now at 40-per-cent cash weightings for its clients.

Exit out of fixed income

This seems to be a prescient move. Globally, there seems to have been a significant change of heart in interest rate expectations, with the long, steady downtrend in interest rates from a peak in 1981 to July, 2016, finally coming to an end. Along with it, so is the 35-year bull market in bonds: Rates on U.S. 10-year yields have gone from 1.3 per cent to 2.3 per cent recently, and bonds have been decimated. Those who trimmed their fixed income exposure in the third quarter likely saved themselves quite a bit of money.

Given such a backdrop, I wouldn't be surprised if TIGER 21 members continue taking their fixed-income money off the table.

Another interesting trend was the uptick in allocation to real estate, from 26 per cent of the portfolio to 28 per cent, an increase of 7.7 per cent. While this is not quite the highest allocation recorded to real estate (that would be 30 per cent, recorded in the second quarter of last year), it remains well above the long-term median allocation of 23 per cent.

At first glance, the move is somewhat counterintuitive, as some very smart bond investors (among them Jeffrey Gundlach of DoubleLine, Mohamed El-Erian of Allianz and Bill Gross of Janus) have recently noted that bond yields could double over the next three to five years.

You can get a sense of what might happen by looking at the lower line chart, which tracks changes in the U.S. 10-year bond yield against the performance of Canadian real estate investment trusts (as represented by an index tracking ETF).

Looking at the chart, it's clear how strong the inverse correlation is between the two. If bond yields continue to rise (as most expect they will), it could be quite detrimental to yield sensitive holdings such as real estate.

However, several recent conversations I've had with HNW individuals (TIGER 21 members and others) suggest a possible answer: The continued preference to put money to work in the United States rather than overseas markets. In the face of political and market uncertainty overseas, most wealthy investors would rather keep their money close to home.

Over all, TIGER 21 members seem to be expecting continued volatility over the next several months, and are currently awaiting further signals before committing more money to public markets. It wouldn't be a bad idea to follow their lead. 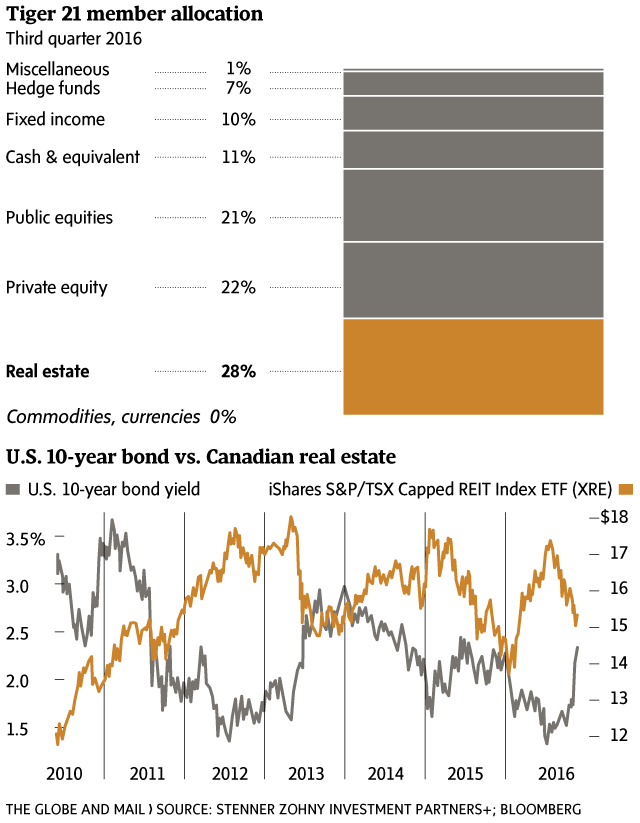