Gold climbed to a third record in a row over $1,800 (U.S.) an ounce on Wednesday, extending its biggest rally since 2008 as a dive in French bank stocks sent new shudders through anxious financial markets.

Although it pared gains late in the day as equity markets pulled up from initial deep losses, gold's long rally showed few signs of letting up as the locus of traders' euro zone debt fears shifted from Spain and Italy to France, which traders fretted could be next in line for a debt crisis.

The jitters overshadowed the U.S. Federal Reserve's unprecedented decision to promise near-zero interest rates for two years. The announcement was a double-edged sword for gold, which retreated during Tuesday's late Wall Street rally but would also benefit from a prolonged low-yield environment.

Gold is up 7 per cent this week, and 20 per cent since June, having broken cleanly above technical resistance from a near three-year trend-channel and putting its ratio to the S&P-500 stock index at the highest since 1988.

But that ratio remains far below its peaks of 1980 and the 1930s, and gold is still below its inflation-adjusted high of nearly $2,500.

"We don't see anything out there that's going to reverse the appetite for gold," said Deutsche Bank commodity strategist Michael Lewis, whose team reaffirmed its forecast for $2,000 an ounce next year, among the most bullish in the market based on a Reuters poll in July.

"Given gold is a financial asset, it's interesting that it doesn't look that expensive at these sort of levels."

He said the risk of a run-up toward $3,000 an ounce -- which would put gold's ratio to the S&P on a par with where it was in the 1930s -- wasn't part of Deutsche's economic outlook, although that likelihood had increased in recent days.

Friday's U.S. credit rating downgrade accelerated a slump in risk assets amid expanding worries over euro zone debt and an increasingly grim-looking U.S. economic outlook. After a one-day respite thanks to the Fed comments, the rout resumed on Wednesday with the S&P falling more than 2 per cent.

This time it was France, joining a long list of woes as shares in its banks -- among the most exposed to Italian and other peripheral euro zone government debt -- slumped as much as 20 per cent in afternoon trade as fears about the currency bloc's debt crisis moved back to the forefront.

Efforts to dispel those fears made only marginal impact. A Standard & Poor's analyst said France's AAA rating was not at risk because it was more serious than the United States in addressing fiscal issues.

Societe Generale, the bank at the center of speculation, said its exposure to peripheral euro debt was small and asked for an investigation into the rumors.

The Fed's promise on to keep interest rates near zero for at least two more years supported the view that the opportunity cost of holding nonyielding gold would remain depressed. But it also triggered a fleeting rally in stocks on Tuesday that spurred a round of profit-taking in gold.

Traders were also starting to build in a greater possibility that the Fed will resort to a third round of quantitative easing, perhaps signaling its intent at its annual Jackson Hole get-together later this month -- exactly one year after Ben Bernanke signaled QE2.

Goldman Sachs predicted a more than 50 per cent chance of a third round of QE by early 2012.

Gold's rally has broken it clear of the ascending trend channel that contained prices since late 2008 -- the last time it staged an 8 per cent gain over four days.

But the Relative Strength Index was flashing overbought status at 84, far above the 70 per cent mark that often signals a correction may be in store. Gold has pulled back both times the index topped that level in the past 12 months.

"When you have a metal that has three or four distinct reasons why it has headed higher, it is very difficult not to be bullish in that environment," said Mitsui Precious Metals analyst David Jolliet. But he added: "Given how far and how quickly we've run up, the move seems somewhat overextended." 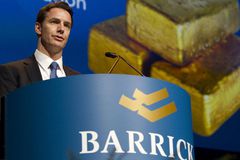 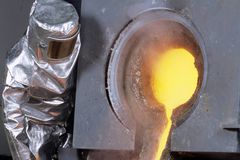 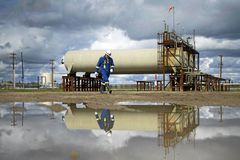 Gold up but off high after volatile post-Fed trade
August 9, 2011 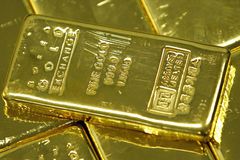 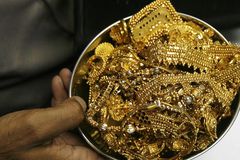