A huge surge in buy and sell orders is jamming up the country's trading system, causing headaches for investors and raising concerns that Canada is at risk of a "flash crash" similar to the stomach-churning plunge in U.S. stocks last month.

The Toronto Stock Exchange, the country's dominant market, recently upgraded its ability to handle orders. Since the TSX capacity increase, the number of orders has rocketed higher, with a new daily record set last month of 101 million. Some analysts pointing to high-frequency electronic traders as the source of all the traffic.

The TSX say its systems are handling the messages, which include buy and sell orders, as well as order cancellations and changes. However, other players further down the line in the interconnected web of computer networks that make up the modern stock-trading ecosystem are having trouble keeping up, traders say.

That's leading to concern that the flood of information is threatening to swamp systems at brokerages, other stock markets and the data vendors that provide stock quotes to investors.

"Not only are the trading venues themselves having issues, but systems at the dealers, vendors and buy-side institutions are creaking under the sudden stress," BMO Nesbitt Burns said in a recent report.

"If message traffic continues to increase on its current trajectory, it is only a matter of time before we witness our own 'flash crash,'" as the 1,000-point plunge in the Dow Jones industrial average on May 6 has now come to be called. Unreliable data systems have been identified as one of the potential causes of that debacle.

In the meantime, the immediate result has been what traders call "stale" quotes. For example, the quote an investor sees on a computer screen might say a stock is trading for $10 a share when in fact that is an old price and the stock has moved higher or lower on the TSX's trading engine but the data isn't keeping up.

Anyone trading on the stale price is in for a surprise - either because they put in an order to buy or sell at the current market price and find out later they did the deal at a different price; or because they enter a trade that they think should get filled because it's close to where they think the stock is trading, when in fact the stock has moved and the trade never happens.

"You're only as good as your data, so if the data is slow you are basically trading blind," said Alison Crosthwait, head of research at brokerage ITG Canada. "It's terrible."

Two weeks ago, just before the May long weekend, many trading desks reported significant slowness in quotes for stocks trading on the TSX as order messaging spiked. Since then, the problem of lagging quotes has persisted.

"You're still seeing that," Ms. Crosthwait said. "Depending on where you're getting your market data, it can be slow at times."

In addition to the issue of trading blind, some traders say the result of the data flood could be higher costs for individual investors. Brokerages and data vendors will have to spend more on technology to keep up with the flood of data, and that cost will get passed on to investors. For investors that don't trade stock but buy mutual funds, they may also see higher fees on mutual funds as managers seek to pass on the cost.

The TSX argues that its upgrades to data capacity are necessary to keep up with global trends in trading and with what customers want.

"We're here to facilitate trading, and our clients want to trade that way," said Carolyn Quick, a spokeswoman for TMX Group Inc., which owns the TSX.

The amount of data flying back and forth between investors and markets is soaring in large part thanks to electronic trading strategies. Many electronic traders use computer programs that are constantly blasting messages to buy or sell, or to cancel or change previous orders.

According to BMO, some electronic trading companies send "hundreds, even thousands, of orders" for every trade that gets done. "These inefficient strategies hog bandwidth and stress marketplace systems."

What's more, because there are now more stock markets than ever before thanks to the advent of alternative trading systems, a single order might create multiple messages as it bounces between markets looking for the best price.

That's just an acceleration of a long-term trend. According to analysts at BMO Nesbitt Burns, message traffic has grown 20-fold in four years, while trading volumes have gone up only 25 per cent.

Possible solutions, traders say, include charging firms for how many messages they send. Currently, exchanges charge by the trade. Another remedy might be for exchanges to "throttle" traffic by cutting back the amount of bandwidth given to those that are hogging it with huge message traffic.

Ms. Quick of TMX said the exchange isn't likely to do either. In fact, the exchange is planning more increases to data-handling capacity, which will increase the pressure on the rest of the Canadian trading world to keep up.

"This is an international trend that shouldn't be surprising," she said. 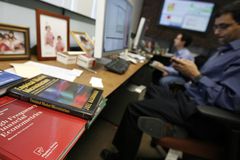