Hewlett-Packard Co. has begun a stunning transformation that will see one of the world's largest technology companies reinvent itself.

On Thursday, the company offered $10.3-billion (U.S.) in a takeover bid for a British software company, revised its 2011 earnings targets downward, and announced it was planning to spin off or sell its personal computer division – the world's largest – to ensure future growth.

The dramatic move is symbolic of the industry's shift from low-margin computer-making toward more lucrative business services, software, and data storage and analysis.

Squeezed between Apple Inc. at the high end and cheaper Asian manufacturers at the low end, HP has struggled to find its place in the post-PC world of tablets and software ecosystems. As it reported weak earnings and slashed its revenue outlook, the company announced late on Thursday its intent to purchase Cambridge, U.K.-based Autonomy Corporation PLC, a company that analyzes data.

HP also said it was killing off its new but unsuccessful TouchPad tablet computer, and discontinuing its webOS software, both of which came from its recent $1.2-billion acquisition of Palm Inc.

HP's move follows similar steps by some of its largest competitors: IBM sold its PC business to Lenovo in 2005, and Dell Inc. is also seeking higher profit margins in software and enterprise solutions.

It also reflects the speed with which the industry is shifting from hardware to software, and comes as the technology giants of old consolidate in order to obtain the technologies that will define the business in the future.

As devices such as Apple's iPad change consumer habits, PC sales are declining and smart phone and tablet sales taking off. At the same time, Asian PC manufacturers have been flooding the market with cheaper imports.

"HP has been caught up in a race to the bottom as the PC market has commoditized," says Sarah Rotman Epps, a senior analyst with Forrester Research. "HP shareholders don't want its low-margin PC business dragging down the high-margin and fast-growing enterprise services division."

Of course, HP's purchase of Palm was meant to help it expand into the mobile world, but the TouchPad didn't sell well, and the company now seems to be ditching webOS.

That came as a surprise to users, said Doug Estey, a user interface developer at Tucows in Toronto, who bought a TouchPad on Monday. "It's been a total pleasure to use," he said. "The entire tech-blog community is freaking out over [this]"

But Maribel Lopez, an analyst at Constellation Research, said it's not enough for HP's own devices to use the operating system, other companies needed to jump on board as well for the system to be profitable.

Acquiring Autonomy would allow HP to move into analytics, where it could help businesses run more efficiently by analyzing the vast amount of information it stores for clients. "Enterprises want smarter systems that just do stuff for them – and until today, HP didn't have an answer to that," Ms. Lopez said, adding that smart computer companies are shifting to analytics. "Hardware is just going to continue to be [a]bloodbath."

At the same time, analysts think the current surge of deals in the tech sector is likely to continue, as companies adjust to the new realities of the industry. Google Inc. on Monday paid $12.5-billion to buy Motorola Mobility, with its more than 17,000 technology patents. Research In Motion Ltd. and Apple teamed with others in a consortium to pay $4.5-billion for Nortel Networks Corp.'s patents.

And Canada's Open Text Corp. – a company that closely resembles Autonomy – was up 6 per cent in trading on Thursday, with National Bank Financial analyst Kris Thompson noting that it could be a target as others mimic HP's move toward enterprise content-management solutions.

"Now the big vendor consolidation starts to happen," Ms. Lopez says. "All the big guys have to really make meaningful plays in order to transition to what we think the next wave of computing will be." 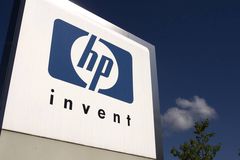 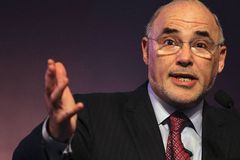 Move over, laptop. The office tablet has arrived
February 24, 2011 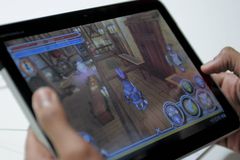