The belief that the Canadian dollar is driven by oil prices is useful but it's what Nobel laureate Daniel Kahneman called a "heuristic" – a form of financial shorthand that oversimplifies the full picture to save intellectual effort.

Heuristics are fine – even preferable – unless things get weird. In that case, a deeper understanding of underlying factors will be required to understand currency markets.

I am definitely not suggesting that oil is insignificant as a determinant of the loonie's value, just that crude's relationship to the Canadian dollar is part of a chain of events that begins with the U.S. Federal Reserve's monetary policy intentions.

There is no doubt that global markets are hanging on every word from Federal Reserve members, both in scheduled meetings and public speeches. When the Fed sounds "hawkish" – inclined toward raising interest rates – U.S. bond yields climb and the U.S. dollar strengthens against most major currencies (in anticipation of foreign money inflows to benefit from higher bond yields). Importantly, when the greenback is strong, oil prices generally fall.

The first chart below shows how important bond yields are for the loonie. The orange line on the chart shows the relative yields of Canadian and U.S. two-year government bonds (the "spread" in this case is simply the yield on the two-year government of Canada bond minus the two-year Treasury yield). A line in negative territory indicates that Canadian two-year bonds are yielding less relative to U.S. bonds. 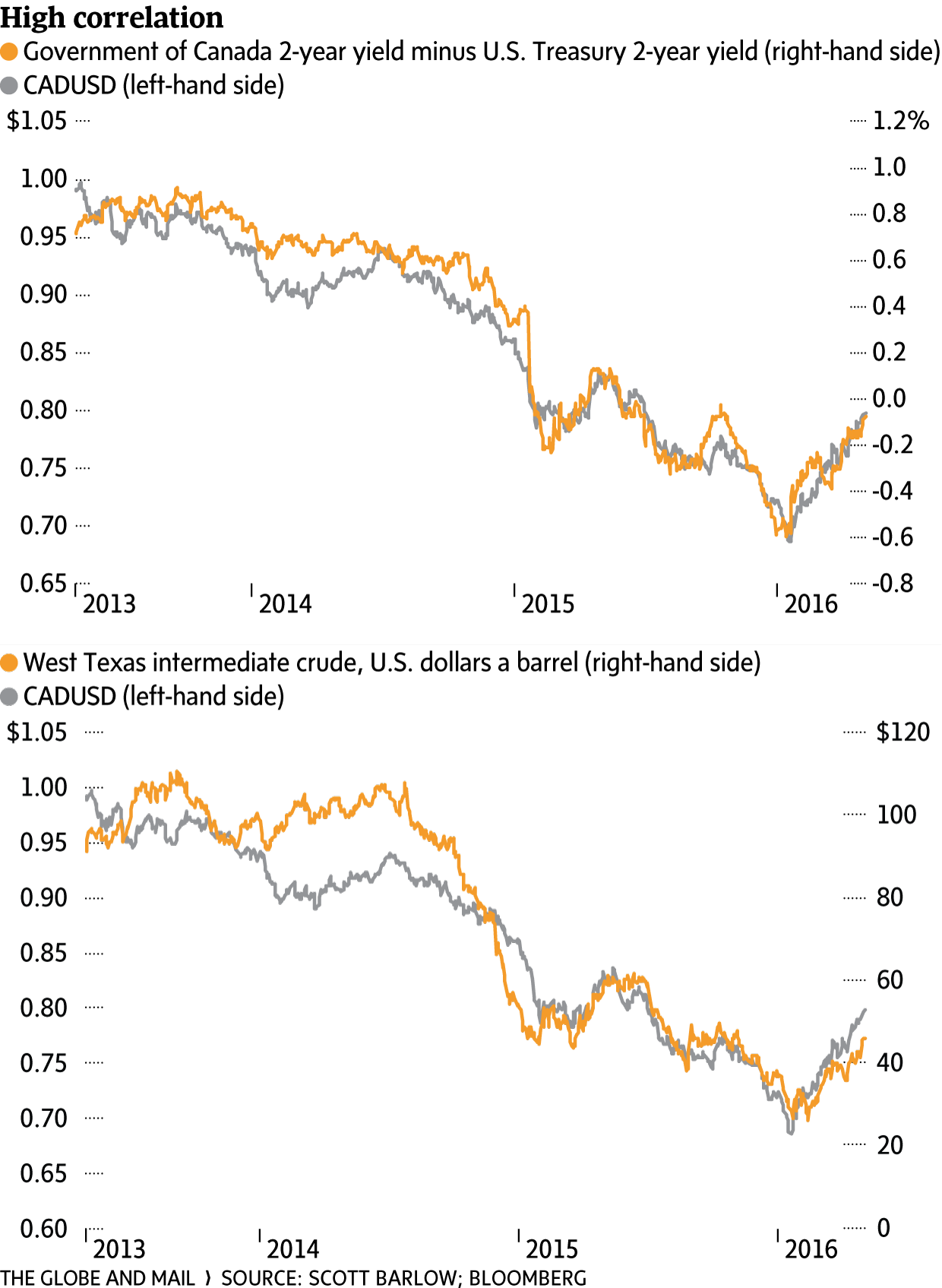 When Canadian yields are higher than U.S. yields, the loonie is strong. On May 8, 2013, for instance, the loonie was at par with the greenback. At that time, the two-year Canadian bond yield was 0.76 per cent higher than the U.S. two-year bond, which was at 0.98 per cent. This domestic yield advantage has steadily eroded along with our currency's decline.

On Jan. 13, 2016, the loonie's value fell below 70 cents (U.S.). The two-year government of Canada bond was yielding 0.31 per cent and the two-year Treasury bond had a yield of 0.91 per cent – U.S. bonds were yielding 0.60 per cent, or 60 basis points, more. Now, the U.S. Treasury bond has dropped to 0.78 per cent and the Canadian bond yield has more than doubled to 0.703 per cent. The yield differential went from 60 basis points to less than eight basis points. The Canadian dollar climbed 12.8 per cent versus the greenback during this period.

The second chart shows the value of the loonie compared with the course of crude prices. The relationship is very close, but it's not as close as the connection between the loonie and the bond yield differential in the top chart. This is backed by correlation calculations – the correlation is higher in the upper chart than the lower one.

Where the value of the loonie is concerned, I think relative bond yields matter more than the price of oil. Admittedly, the factors driving all of these market prices – bonds, currencies, and commodities – are interrelated, which makes causation difficult to assess. I do believe, however, that everything starts with Fed chair Janet Yellen and global investors' frantic attempt to figure out how many U.S. rate hikes will occur in 2016.

All of this is subject to change or update as new information comes in. If I could get these macro frameworks right every time, I'd be living in a Connecticut house the size of an aircraft hangar and commuting daily to my Manhattan office by helicopter. Nonetheless, my thesis above is the best explanation, the one that fits the available data best, for fixed-income and commodity-price behaviour and, by extension, the value of the Canadian dollar.