BMO Nesbitt Burns analyst Keith Bachman has upgraded Apple Inc. to an "outperform" rating in the wake of the tech giant's earnings beat late Tuesday, encouraged by the company's outlook on margins.

Outperform is the equivalent of a buy rating.

Apple projected profit margins would be in the 36 per cent to 37 per cent range for the current quarter that ends in September. That was reassuring to Mr. Bachman, given concerns Apple may be looking at producing lower-cost products that could cut into margins.

"While we still have some concerns about December quarter margins, we believe that the September-quarter gross margin guidance plausibly supports our view that the new mid-range iPhone will be in the $450 price range with approximately 38 per cent to 40 per cent gross margins," he said in a research note.

Prices for the iPhone were down by about 6 per cent from the previous quarter. But in the year earlier period, they had also posted quarter-over-quarter price declines of 5 per cent. "Hence, we think some of the price decline was seasonal," commented Mr. Bachman.

Mr. Bachman explained that BMO underestimated the negative sentiment for the stock at the time of the downgrade – which, in a contrarian sense, actually meant Apple stock had greater potential than the bank had thought.

"We think investor sentiment is very negative, or cautious on the long-term prospects on AAPL. We think many accounts have little to no exposure to AAPL share," Mr. Bachman said. "We likely underestimated this sentiment at the time of our downgrade, which in our opinion means the stock has more upside potential than we had figured."

"With almost a 3 per cent dividend yield, we think AAPL stock will find support, and not trade below $395," he added.

The average price target is $526.59, according to Bloomberg data, which is roughly where it's been since the end of May.

Roughly three-quarters of analysts rate the stock as the equivalent of a buy, with only two having sell ratings.

RBC Dominion Securities analyst Mark Sue downgraded Polycom Inc. to "underperform" from "sector perform," due to the sudden termination of its CEO, a lowered near-term outlook, and "ongoing execution inconsistencies."

"Polycom has a healthy annual revenue base of about $1.4-billion a year, yet mismanaged strategy and inconsistent execution have resulted in gross margins declining from peak levels of 62 per cent to current levels of 59.5 per cent," he said. "Operating margin target at one point was as high as 20 per cent but has since settled to just 9.5 per cent with a guidance range of 6.7–7.9 per cent. For the past five out of six quarters, Polycom has reduced its forward outlook, although it's sticking to its view of a rebound later this year."

He thinks Polycom - a provider of communications solutions - could attract activist investors, given that it still has strong free cash flow of $130-million a year despite poor management execution.

Raymond James analyst Steve Hansen thinks North American methanol prices will remain at an "outsized" premium to Asia for a longer period of time than he earlier expected, which should help give further lift to shares of Methanex Corp.

The second quarter saw a robust price environment for methanol, and he thinks this will now spill over into 2014.

AlarmForce Industries Inc.'s ouster of chief executive Joel Matlin was a big surprise given his track record of building the company organically over the years, but the appointment of chief financial officer Anthony Pizzonia as interim CEO should make for a smooth transition period, said Industrial Alliance Securities analyst Steve Li.

Mr. Pizzonia has years of experience with the company and deep knowledge of the business.

"Overall, given the stable nature of the business, we expect this move to show little disruption in the short term," Mr. Li said. "However, the risk or the opportunity will be whether or not the new management team can revive sales growth while reducing the attrition rate through new initiatives."

Although revenues were down as anticipated, earnings per share in the quarter beat Street forecasts by about 20 per cent, as operating margins came in at a robust 13.4 per cent, he noted. Meanwhile, the company continues to see minimal impact from the so-called sequester that has slowed activities at the U.S. Department of Defense. 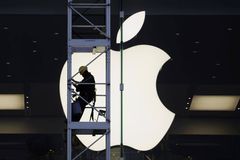