Yet another major bank is warning investors to fade any signs of strength in the loonie following Wednesday's interest rate decision, Monetary Policy Report, and press conference from the Bank of Canada.

The Bank is nearly universally expected to keep rates on hold, as monetary policymakers want to see how the economy fares in the second quarter after a rough patch to open the year.

Stephen Poloz, governor of the Bank of Canada, and his peers may also indicate that they believe the insurance taken out from the January rate cut will be sufficient, throwing cold water on future rate reductions. Such hawkish commentary would likely foster an appreciation of the Canadian dollar relative to the greenback. As the central bank is longing for a pick-up in export growth to take the baton from consumer spending, this result hamper Mr. Poloz's quest to bring the economy "back home."

"If the Canadian dollar rallies too hard on a view that the BoC won't cut, that would be the very fuel for a rate cut to become more likely," said Avery Shenfeld, chief economist at CIBC World Markets.

The Bank of Canada is data-dependent – but not dependent on first-quarter data..

That's because Mr. Poloz is confident that the oil shock looks to be "front-loaded" – that is, most of the damage will affect the economy in the first three months of 2015.

"The correlation between capex intentions and investment suggests the biggest hit to capex awaits, (chart of the day), suggesting a more drawn out economic funk," she writes. 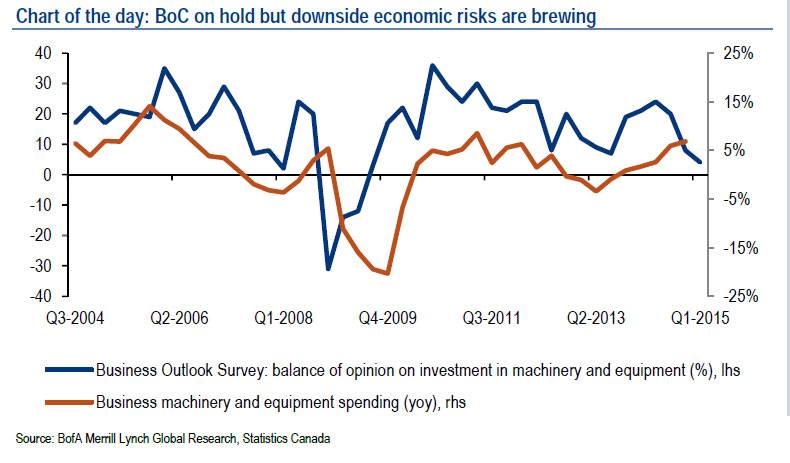 The figures on firms' investment intentions (the blue line) are derived from the Bank of Canada's quarterly business outlook survey. Thirty-two per cent of firms expect capital outlays to be lower over the next year, while 36 per cent expect to boost spending on machinery and equipment.

The nature of this survey somewhat skews the ability to glean useful information. For instance, if 32 oil companies intend to cut capital spending by $1-billion apiece, but 36 manufacturing firms intend to each purchase a $20-million more worth of equipment than they did last year, the balance of opinion would be positive, even though the result for the real economy would be negative.

However, there's no doubt that the balance of opinion is trending to the downside, and that changes in firms' investment intentions have tended to lead changes in actual spending.

"If growth disappoints, Poloz is setting up for an easy foray into dovishness later this year," writes Ms. Enenajor. "So even with rates on hold in April, we expect another 25 basis point cut in October as growth underperforms expectations."

The economist also noted that financial conditions do not appear to have eased as dramatically as the Bank has implied.

"Ultimately, we recommend fading USD/CAD weakness post-BoC," she writes. "We do not see the BoC cutting rates until 4Q15, but risks remain on the downside to the economic outlook with the energy shock giving the FX market comfort in maintain its short CAD position."

The proximate cause of weakness in the Canadian dollar relative to its U.S. counterpart in the weeks ahead will likely be fuelled by improving economic data south of the border, according to Ms. Enenajor.

It should be noted that the last time the Bank of Canada tried to identify the timing and magnitude of an economic shock on output wasn't exactly a display of forecasting prowess, which gives cause to doubt the governor's assessment of a "front-loaded" oil shock.

The Alberta floods and Quebec construction strike prompted the Bank to deem growth would be "choppy" in the coming quarters in its July 2013 Monetary Policy Report. Monetary policymakers predicted an expansion of rising 1 per cent in the second quarter before a vigorous rebound to 3.8 per cent growth in the third quarter. Growth for these quarters was initially reported at 1.7 and 2.7 per cent, respectively – much less choppy than the Governing Council anticipated.