In mid-June 2012, I created a Buy and Hold Portfolio for people who don't want to spend a lot of time reviewing their positions and are not interested in active trading. This portfolio focuses on individual stocks, although it also includes a bond ETF.

The goal was to concentrate on blue-chip stocks that offered long-term growth potential plus regular dividend payments. I included both Canadian and U.S. issues, and each original stock was given a 10 per cent weighting. I added a 20 per cent bond weighting to provide some downside protection in the event of a stock market plunge of the 2008 variety.

At the time, I stated that the objective was to generate decent cash flow and slow but steady growth. I used several criteria to choose the stocks, including long-term growth profile, industry leadership, good balance sheet, solid dividend record and relative strength in bad markets. Given the nature of the portfolio, the intention was to make changes only when absolutely necessary. I did not set a target rate of return at the time but eight per cent annually would be appropriate for a portfolio of this type.

These are the securities I selected with some comments on how they have performed since my last review in January.

iShares Canadian Universe Bond Index ETF (XBB)
This exchange-traded fund represents our only bond position. It tracks the performance of a broad spectrum of Canadian bonds, both government and corporate. Bonds were not expected to do well this year; however, they've turned out to be surprisingly strong due to the persistent low interest rate environment. The shares are up 1.5 per cent since the last review in January, and we have received distributions of $0.427 per unit for a total return of 2.9 per cent in six months. That may not seem like a lot, but it's much better than anyone expected from the bond market at the start of the year.

BCE Inc.
BCE shares have come under pressure recently because of Ottawa's latest move to attempt to create a fourth major wireless provider in Canada. However, the stock is still higher than it was last January, and the company pays a healthy dividend of $0.6175 per quarter ($2.47 annually). Our total return in the past six months was 6.4 per cent.

Brookfield Asset Management Inc. (BAM.A)
Brookfield shares have been on a tear. The stock is up from $41.70 at the time of the January review to almost $48 now. Including dividends of $0.36 (U.S.) per share, our six-month total return on this one is 15.9 per cent.

Canadian National Railway Co. (CNR)
CN continues to go from strength to strength. The stock is up more than $12 since January, and we have received dividends of $0.50 a share for a total return of 21.6 per cent in that time. Yes, the dividend yield is a low 1.4 per cent – which just goes to show that dividends aren't everything. CN is our second-largest gainer to date with a total return of 75 per cent.

Enbridge Inc. (ENB)
Pipeline companies continue to run into resistance in their efforts to build new capacity, but they remain comfortably profitable based on existing assets. Enbridge has been one the mainstays of my Internet Wealth Builder newsletter for years, and it continues to produce good returns. Over the past six months, we're ahead 10.2 per cent on this one.

Toronto Dominion Bank (TD)
TD stock split two for one at the end of January, so we now own 130 shares instead of the original 65. Bank stocks have done well this year, and TD is no exception with a total return of 14.2 per cent since the time of the last review.

AT&T Inc. (T)
This giant U.S. telecom finally emerged from the doldrums to post a total return of 12.1 per cent since our last review. The shares gained more than $3, and we are receiving a handsome dividend of $0.46 per quarter.

McDonald's Corp. (MCD)
The stock has rebounded after closing 2013 on a down note. The shares are up more than $4 since my last review, and with the high quarterly dividend of $0.81 per share, we have a total return of 6 per cent in that time. That's the lowest among all our stock selections over the period, however, so I'll be keeping a close watch on this one.

Walt Disney Corp. (DIS)
Mickey Mouse continues to pay off big time for us. The share price is up another $10 since January, giving us a six-month return of 14 per cent. There were no dividends during the period as the company makes payments only once a year. This has been the biggest winner in the portfolio to date with a total return of 85.9 per cent.

Here is the status of the portfolio as of mid-day on July 16. For simplicity, the Canadian and U.S. dollars are considered to be at par and trading commissions are not factored in. 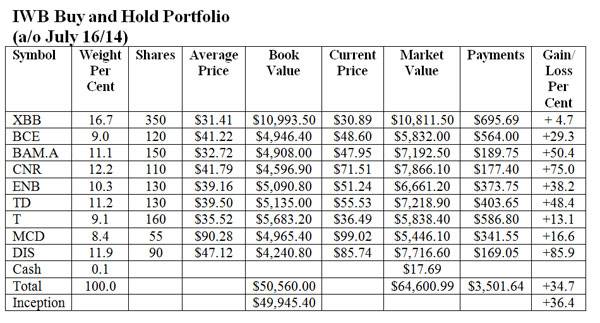 That's very gratifying, but don't expect it to continue indefinitely. We've benefitted from strong markets since the launch without a single correction of any magnitude. That will change at some point, and the true buy-and-hold investor will ride it out when it happens.

Changes
The bond component of the portfolio is down to 16.7 per cent. We need to strengthen that so we will have more of a cushion when the inevitable correction hits. Also, the positions in CN Rail and Walt Disney have become too high due to price appreciation.

A reminder: I do not recommend doing small trades unless you are using a discount broker and paying minimum commission. These transactions are only for purposes of this model portfolio. The most effective way to add small position to your own portfolio is by using DRIPs (dividend reinvestment plans).

Here is the revised portfolio. I'll revisit it again in six months. 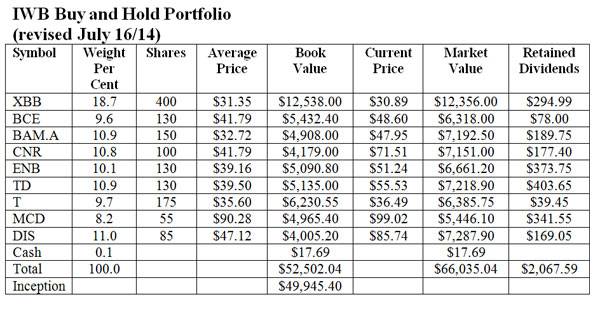