The shift in emphasis was clear as senior executives discussed earnings reports with analysts on Thursday. A year ago the talk was all about cutting costs, selling assets and expanding free cash flow, but miners are now stressing growth opportunities too.

Agnico Eagle Mines Ltd. said it was planning to invest more than $1.2-billion (U.S.) in two mines in Canada's North. Goldcorp Inc. reiterated its commitment to expanding its production by 20 per cent over the next five years.

Barrick Gold Corp. warned of potential declines in production but also noted it was in the early stages of evaluating the construction of an underground mine at its long-stalled Pascua-Lama project.

The renewed interest in growth might remind nervous investors of the debacle a decade ago when gold miners spent so lavishly on acquisitions and mine development that most failed to generate any lasting returns for shareholders.

But this time around the experience could be much more pleasant for shareholders if miners can combine a growth mandate with a firm grip on expenses.

Producers say the culprit in the past boom was soaring construction costs prompted by competition for scarce contractors.

There is little evidence of similar giddiness in the current climate. Meanwhile, managers continue to profess their cost-cutting zeal.

"I agree companies have shifted gears in their approach to their investor bases and have started to talk a little bit more about growth," said Sean Boyd, chief executive at Agnico Eagle, but he added that doesn't mean financial discipline is being thrown overboard.

"Actually, it's a great time to be expanding exploration budgets," he said in an interview. Because the level of mine construction is still relatively low, "you get the best contractors, you get good prices."

Agnico Eagle has been investing steadily in mine development for years while also whittling down its net debt, he said. As a result, it won't need to tap capital markets to develop its Meliadine project and a deposit near its Meadowbank mine, both in Nunavut; it can cover the $1.2-billion bill by using cash on hand and cash generated from operations, Mr. Boyd said.

Barrick chairman John Thornton also stressed his company's bottom-line fixation in a conference call with analysts. "Our overarching goal is to grow free cash flow per share – no matter the price of gold," he said.

The miner has made impressive progress in trimming its debt load, which stood at almost $13-billion in 2014.

Barrick has slashed its indebtedness to $7.9-billion and plans to chop it to $5-billion by the end of 2018.

Barrick said its gold production would increase modestly this year to between 5.6 million and 5.9 million ounces, but it warned that output might fade to the 4.6-to-5.1-million-ounce level by 2019.

However, "these production plans are likely to change, following investment in near-mine exploration and further operating efficiencies, both of which are likely to increase the amount of profitable ounces we can bring into the plan," chief operating officer Richard Williams said.

One promising area for development is Pascua-Lama, which straddles the border between Chile and Argentina and has been stalled since 2013 as a result of environmental concerns.

The company has launched a prefeasibility study to evaluate the construction of an underground mine on the Argentine side, but Mr. Williams stressed on Thursday that it would not be built without the assurance of an attractive return.

"Reserves across the sector have been undeniably declining for a number of years," chief executive David Garofalo said. "As an industry, we have to reverse that."

This past year Goldcorp spent $400-million on the Coffee project in the Yukon, a 60,000-hectare land package that it believes has the potential to be a significant new mining camp.

To be sure, even large miners have to be wary of the costs and complexities involved in big projects. Mr. Garofalo predicted that senior producers such as Goldcorp will increasingly partner with other major players on specific ventures.

"I'm talking to my peers constantly about potential projects," he said. 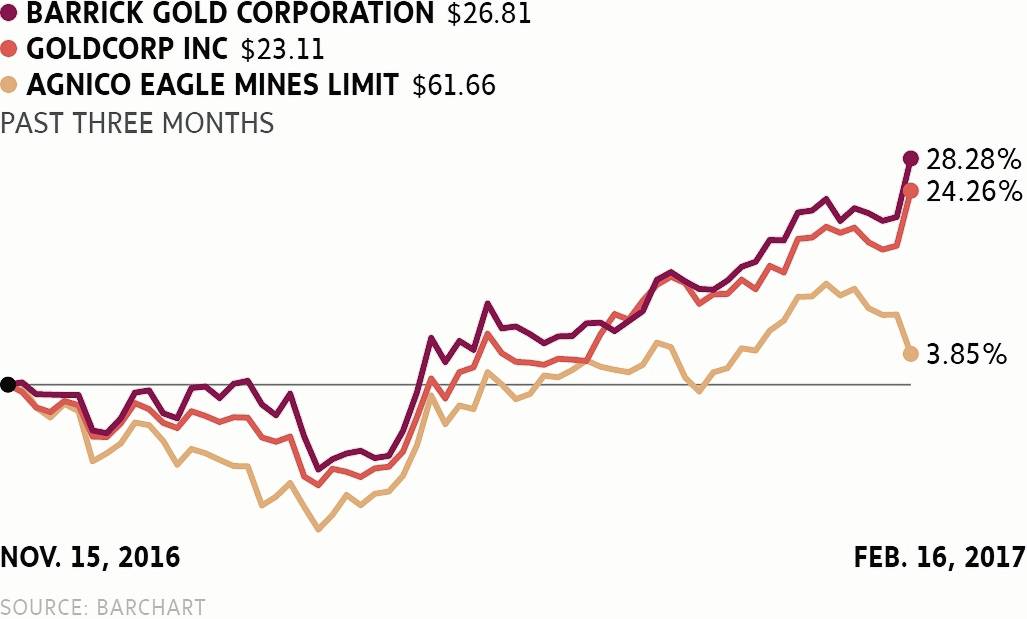