The idea of deflation sounds okay at first – who wouldn't want to pay lower prices for everything? But economists and the experience of Japan tell a much more negative story. The things that accompany deflation – slow economic and credit growth with frequent recessions, job losses and debt defaults (including mortgages) are no joke for either investment portfolios or those affected in real, everyday life.

Canadian households, who along with their Australian counterparts are the most indebted in the world, are particularly in the crosshairs when it comes to deflation-related risks to their net worth. Investors have piled in to credit-sensitive market sectors, like real estate, banking and insurance, that would be hit hardest by deflation. In this way, the seeds of a potential domestic deflationary nightmare (I'm emphasizing "potential" here – deflation is no one's base case at this point) have already been sown.

Demographic factors also point to upcoming deflationary pressures as the boomers move past their peak consumption years. Statistics Canada recently reported that the number of Canadians over the age of 65 now outnumber those under 14 for the first time. And, unlike the United States, Canada does not have a millennial generation larger than the boomer cohort to maintain consumption levels.

Globally, growth and inflation expectations are being ratcheted lower. The current inflation forecast for Canada is still positive – 1.9 per cent – but deflationary pressure emanating from China and the rest of the developing world is intensifying as a trend that investors and homeowners should follow closely.

In the minutes of the most recent Fed meeting released Thursday, the Federal Open Market Committee were alluding to China-related deflation risks with the phrase, "several Fed officials [are] concerned by downside risks to inflation."

Right now, consensus economist estimates for 2016 GDP indicate 2.3 per cent for the developed economies, 4.9 per cent for the emerging world, which combine for expectations of 3.5 per cent global growth. There are ample indications, however, that the 4.9 per cent GDP growth forecast for emerging markets will be revised downward by a significant margin. In China, by far the largest developing economy, Citi research believes the actual current economic growth rate is nowhere near the official reports of 7.0 per cent – it's actually closer to 4.6 per cent.

Britain-based economics research consultants Ecstrat believes problems caused by poor governance in the developing world have created a long-term downturn for growth. "We believe that a number of emerging markets may now have entered a vicious cycle, whereby the poor governance factors and policy-making, which are the underlying causes of weaker economies and currencies, are being exacerbated by the pressure on living standards resulting from lower purchasing power." In addition, the Financial Times recently noted that economists have overestimated developing world growth for each of the past five years, by more than a full percentage point.

The International Monetary Fund recently released a chart, reproduced below, showing global inflation expectations for the coming years. The most startling aspect of the chart is how low inflation levels are in the developed world already. The Fed's concerns about deflation are easily understandable when current developed world inflation expectations for 2016 are a meagre 0.31 per cent in year-over-year terms: There is little scope for enduring further deflationary shocks. 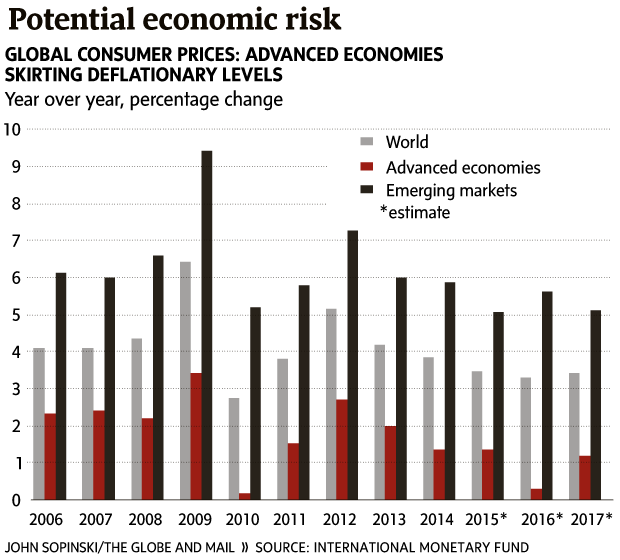 Readers are likely thinking "Nah, never happen" at this point and they are probably right. World economies, notably the United States, would have to get considerably worse before widespread domestic unemployment and debt defaults hit the economy. The weak loonie also keeps the prices of imported goods high, which hurts consumers but protects goods prices from deflationary declines.

But it's also true that the best time to worry about economic risks is long before they are imminent. And besides, given the unprecedented nature of the current Canadian credit binge, is it unreasonable to expect unprecedented problems as the bubble unwinds?